After an extremely slow start, many analysts believe the next two years could see rapid growth in the battery-electric vehicle market. Credit the flood of new products coming to market. Many of those will carry unfamiliar names, such as the Lucid Air sedan set to go into production later this year.

California-based Lucid Motors is run by Peter Rawlinson, who serves a dual role as the startup’s CEO and CTO. The British engineer has worked for a number of automakers over the years, including Jaguar and Lotus, but made his name as the original program chief for the Tesla Model S. He aims to repeat that success at Lucid.

Originally named Atieva, Lucid last month announced it was entering into a SPAC-style merger with Churchill Capital Corp. IB (CCIV), a move meant to flesh out its coffers and take it public. The deal has generated enough cash to put into production not just the Lucid Air sedan, but also the Project Gravity SUV that’s set to follow, according to Rawlinson. But, since the deal was announced, there has been some controversy over Lucid plans. And CCIV stock has tumbled sharply since reaching a $64.86 peak – settling in at $26.89.

Insider talked with Rawlinson about the company’s ups-and-downs on Wall Street, its future product plans, and more.

Insider: Let’s start by talking financials. Why did you choose to do a SPAC reverse merger?

Rawlinson: It’s a very convenient and appropriate tool that has enabled us to go public in a very efficient way and a very timely manner. We’ve raised $4.5 billion. Compare that to how Tesla started out. They were always going back to the trough to raise more money and it was always a struggle. What we’ve been able to do is use this SPAC to show the benefits of the company and we got an illustrious group of investors, the bluest of the blue chip. It’s unprecedented. They think we’re the real deal.

This has been a fantastic way for me to safeguard the future of the company long-term with a serious injection of cash. That safeguards us through to the early part of 2023, when Project Gravity comes out.

Insider: Now, on the dark side, CCIV has gone down about 60% since peaking at $64.86 a share. That’s certainly raised some concerns. It appears one concern is that you pushed back the launch date for the Lucid Air.

Rawlinson: There’s an incorrect message out there that we somehow changed the storyline. We haven’t changed anything from the presentation material we provided to Churchill Capital and investors. We put in our manifesto that we would manufacture the car in the second half. I was pushing for a spring start of production. Now, we have an alignment of minds that we will get the project right and not worry about the date and under-promise and over-deliver as a public company. I think that’s not been digested very well by investors. But, you know, it was all based on speculation, the $64 (52-week high). What we included in our documentation when that merger was announced has not changed. We stated second-half of the year for production. 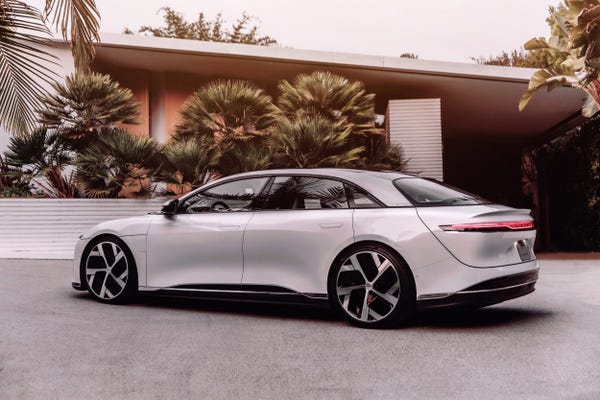 Rawlinson: I’m used to this. We’ve been hitting targets with our key investors for the last two years against KPIs, key performance indices. This is not alien to me at all. Remember, we built the first greenfield, purpose-built EV factory in North America in record time against the backdrop of a pandemic. Meeting targets is bread-and-butter for us. Ultimately the product is king, and everybody knows this. Let the car do the talking. I can’t wait to bring it out.

Insider: We hear a lot of startups laying out grand plans. Even Tesla is struggling to make money on their car production. So, isn’t it still a struggle for a startup?

Rawlinson: It’s a huge challenge. We haven’t sold a car yet. I approach this with humility. We have to get the first car into production. The entire team is pushing, pushing, pushing to have a great launch before we talk about any other things. We’re taking baby steps and that keeps us on track. We built the factory in record time. Right now, it’s good for 34,000 units a year. We’re making our pre-production release candidates. We’re getting the quality right. We’re working with all our suppliers. We’re just marching towards production.

Insider: There are some people who wish Lucid had started with an SUV, rather than a sedan. Should you have done so? And how soon will you have an SUV?

Rawlinson: The first product defines a brand. We’re going to be a luxury car manufacturer. As with Mercedes, the S-Class defines that brand. Tesla started with a sedan. The hardest thing to do is a world-class sedan. There is a perception the sedan market is tanking, but it’s still very significant. SUVs are a big market, and a growing one, and that’s why we need to get our SUV out as quickly as possible off the Air platform. We’re going to get an economy of scale because the SUV will be our biggest seller, undeniably.

We’re going to launch “Project Gravity” and get that into production in 2023. It’s interesting to note that if you look at Tesla, it took four years after the Model S to get the Model X into production.

Insider: And what are you planning beyond that?

Rawlinson: Oh, well, after that is our second platform. That, I suppose, would be equivalent to our Tesla Model Y, something in the $40,000, $45,000 range. I want to get that as quickly as possible because I want to get scale into Arizona.  We now have 365,000 units planned. 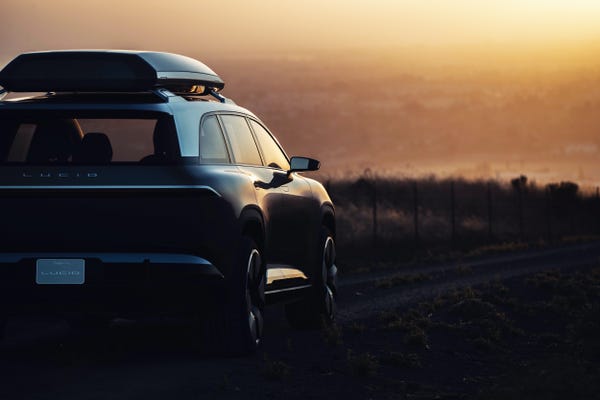 Insider: On the positive side, I’m noticing more and more people becoming open to electric vehicles. Is this the year EVs become an acceptable part of the market?

Rawlinson: I think that is happening. I think we’re going to see the pendulum swing massively towards electrification. The last arguments against EVs have been eroded. We’re seeing a maturity and expansion of the fast-charging network. That’s one thing. And range anxiety, having a car like we’ve got with 500-mile range. I guess there’s one last piece, the cost of buying one, and that’s what we have to work on next.

Battery prices are going to come down per kilowatt-hour. Efficiency is going to go up, which means you can go farther per kilowatt-hour. That’s actually more important than battery cost … because you don’t need as much battery. And that means lower weight. I can use smaller brakes, for example, and that further reduces cost. That erodes the final bastion of resistance.

Insider: While EV sales are expected to increase, so will the number of companies trying to sell EVs. Who worries you more? Is it Tesla? One of the other startups? Or is it one of the established manufacturers, like General Motors, VW or Ford? Who are you looking over your shoulder at?

Rawlinson: That’s a very interesting question. I’m going to tell you something that is going to come across as terribly arrogant because I’m not worried about any of them. Honestly, I mean that. I can’t wait for the (all-electric) Mercedes EQS to come out and compare it with this sedan. I’m almost like a prize fighter who wants to get in the ring. I’m ready for it. I thrive on this tech war. I’m a complete nerd for this stuff. I just want us to be the best.

That’s how I drove the team 10 years ago when I was chief engineer on the Model S. People thought I was crazy because it was already fantastic but I always took the approach that it could be a little better. If I didn’t really push and give it my all and (the competition) is a little better than us I was going to regret it for a lifetime. With the Air, it’s just reach for the stars. I don’t tend to set targets. It’s “how good can we make this thing?”

Insider: One last question: These days, even traditional manufacturers don’t like to describe themselves as car companies. They’re “mobility service providers,” or the like.