A consortium led by Macquarie Group is exploring a rival offer for Sydney Airport in a potential challenge to IFM Investors’ $22.3 billion bid, people with knowledge of the matter said.

The investment bank has been speaking with potential partners, including local superannuation funds, about making a joint offer, according to the people. The bidding group could include funds managed by Macquarie Infrastructure & Real Assets, the people said, asking not to be identified because the information is private.

Macquarie may also use some of its own capital for the deal and could seek to rope in some of the MIRA funds’ investors to join the consortium, one of the people said. Sydney Airport has risen 19 per cent this year, giving it a market capitalisation of about $20.5 billion. 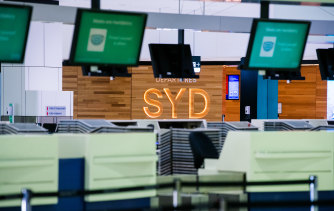 A group of investors led by Macquarie is looking into lobbing a rival bid for Sydney Airport, sources say.Credit:James Brickwood

Any transaction for Sydney Airport, Australia’s main overseas gateway, would be one of the boldest bets yet on a recovery in global travel after the coronavirus pandemic. Including debt, a purchase of Sydney Airport would rank as the largest-ever acquisition in the country and one of the world’s biggest airport deals in recent years, according to data compiled by Bloomberg.

Deliberations are at an early stage, and there’s no certainty Macquarie will proceed with a formal offer, the people said. Macquarie could also seek to join IFM’s consortium, one of the people said. Representatives for Macquarie and Sydney Airport declined to comment.

Sydney Airport said this week it received an offer of $8.25 per security from an investor group led by infrastructure manager IFM.

The proposal represented a 42 per cent premium to Sydney Airport’s last closing price before it was announced. IFM teamed up with QSuper, a super fund based in Queensland, and Global Infrastructure Partners for the bid.

A Macquarie-backed investor group previously owned the Sydney airport after winning a concession from the government in 2002. The bank later began to sever ties with its listed airport management affiliate, and the company changed its name in 2009. It decided to hand the last of its Sydney Airport stake back to Macquarie shareholders in 2013.

Alternative asset managers, sovereign wealth investors and pension managers have been flocking to infrastructure assets, with the volume of deals in the sector jumping 54 per cent in the first half of the year to $US190 billion ($254 billion), according to data provider Preqin. They’ve been snapping up everything from toll roads to water utilities as they seek to lock in long-term steady returns in a world of low interest rates.

KKR & Co. agreed to buy UK-listed infrastructure company John Laing Group for about £2 billion pounds ($3.7 billion) in May. Ontario Teachers’ Pension Plan, one of Canada’s largest public-sector pension managers, is aiming to double infrastructure investments within the next five years.