It’s been roughly a decade since Manchester United FC were the kings of English football, much to the consternation of its fans and schadenfreude of rivals. Yet the lack of recent success may be of little matter to a buyer.

The American Glazer family that owns what’s arguably still England’s biggest club is looking for an investor and might be prepared to sell up. They are in the market for a deal that values Manchester United at about £5 billion ($9 billion), Bloomberg reported in August.

While the owners of fellow English Premier League giant Liverpool FC are also weighing a sale, and rival Chelsea FC only just sold in a £4.25 billion deal, neither brand can compare to Manchester United, according to people involved in football investment. 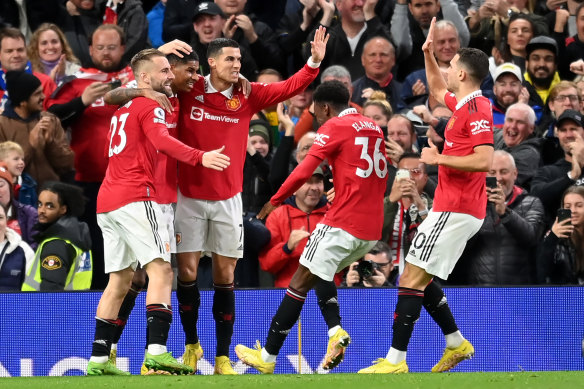 Manchester United is a premier brand for buyers.Credit:Getty

The club from the north-west of England forged its reputation over decades of triumphs in domestic and European competitions – including glory years under legendary coaches Sir Matt Busby and Sir Alex Ferguson – ensuring its status as a premier brand for buyers.

“This deal has to be at a landmark valuation,” said Adam Sommerfeld, sports investment specialist at London-based Certus Capital Partners. “Clearly this is the leading light of football, probably sport overall in terms of M&A at the moment. Everyone who is anyone is going to be looking at this very seriously.”

Among the names coming up as potential suitors for Manchester United is UK billionaire Jim Ratcliffe, a fan of the club who earlier this year offered to buy Chelsea. Meanwhile, Saudi Arabia’s sports minister, Prince Abdulaziz bin Turki Al-Faisal, told the BBC there was a lot of “interest and appetite” in Manchester United and Liverpool in the kingdom and his government would support a private sector bid. A group led by Saudi Arabia’s wealth fund bought Premier League club Newcastle United FC last year.

‘Clearly this is the leading light of football, probably sport overall in terms of M&amp;A at the moment.’

Competition for Manchester United could be intense, if recent deals involving European football clubs are any guide. Chelsea was eventually sold to a consortium led by US billionaire Todd Boehly after a fierce bidding process run by the US investment bank Raine Group that initially drew more than 250 interested parties.

“We expect a competitive process, as MANU is a truly unique asset with significant global reach and plays in the strongest realm within the current media landscape – live sports,” the Jefferies analysts wrote.

Raine is advising Manchester United on its sale process, with Rothschild & Co acting as financial adviser to the Glazer family. Manchester United’s US-listed shares jumped 68 per cent this week.

While there’s no shortage of money from the Middle East and US private equity that could come in to battle for Manchester United, not everyone is convinced the club will fetch a high price. Former Goldman Sachs Group economist Jim O’Neill, a Manchester United fan who once bid to buy it, said that the valuations being talked about already looked “out of reach”.

Buying any top football club is a gamble because the business model requires teams to succeed on the field to qualify for the lucrative UEFA Champions League, Europe’s elite club competition. Unlike Chelsea and Liverpool, Manchester United failed to make the cut last season. It last lifted the trophy in 2008, and won the Premier League most recently in 2013.

The late Malcolm Glazer bought Manchester United in a 2005 leveraged buyout that saddled it with debt and the family has incurred the wrath of fans ever since. While this was mitigated in the early years of their ownership as the team continued to win trophies under Ferguson, resentment has grown steadily after his retirement in 2013.

“They don’t really need to sell,” Certus’s Sommerfeld said of the Glazers. “Looking at adding the brand value, I get to around £4.7 billion, but I think the Glazers would want to surpass that.”