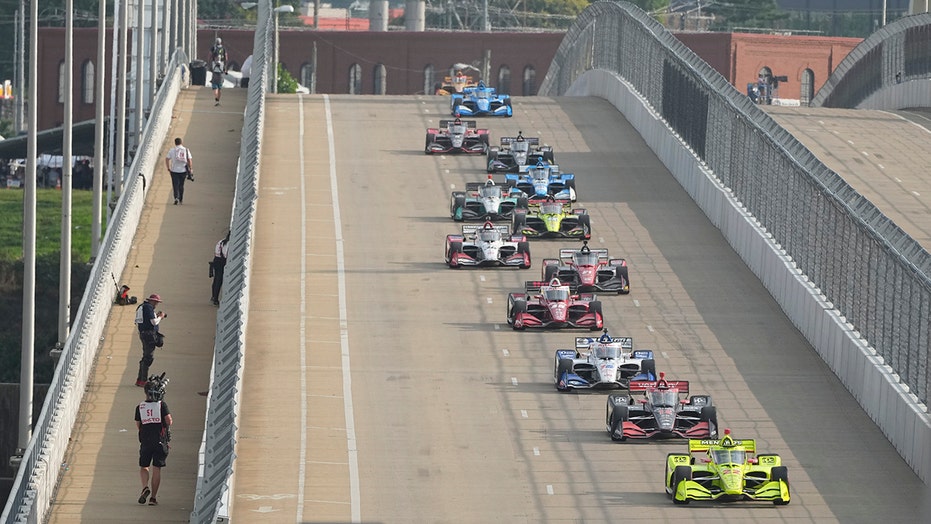 Marcus Ericsson used the slowed car in front of him as a launching ramp and shot up and over — with a dangling wing — Sebastien Bourdais’ Chevrolet. “I thought my race was over there,” Ericsson said. 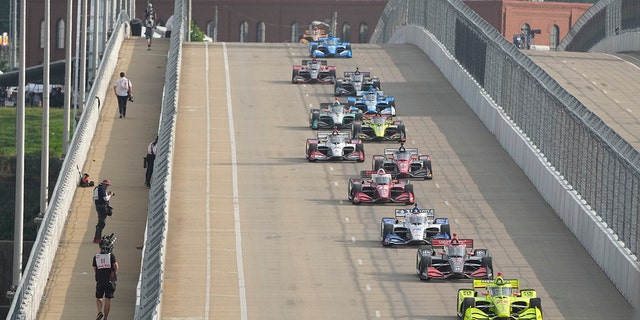 The track included a stretch over the Korean War Veterans Memorial Bridge.
(AP)

Not in this wreckfest. Call the latest IndyCar race winner Marcus Air-icsson.

Ericsson stuck the landing on his early race flight and avoided further disaster on the perilous city streets of Nashville on Sunday to win the inaugural Music City Grand Prix.

“I’m just trying to figure out how I ended up winning the race after flying and seeing the sky,” he said.

Ericsson conserved fuel and survived hard-charging runs from Colton Herta and Scott Dixon and won his second race of the season. He moved to fifth in the IndyCar points race with five race left — 79 points back of leader Alex Palou.

Ericsson doesn’t have a deal with Chip Ganassi Racing for 2022 and said “I hope Chip was watching today.”

“My biggest wish is continue here in the 8 car,” Ericsson said.

He made the IndyCar highlight reel long before the checkered flag when he jumped the backside of Bourdais’ Chevy and knocked the Frenchman out of the race. Ericsson’s airborne Honda needed a new front wing only five laps into the race and said he thought the car was going to snap in half.

The 30-year-old Swede won as darkness fell in Nashville with Dixon, the six-time IndyCar champion, making a late run.

Ericsson caught a break when Herta clobbered his car into the tire barriers with five laps left, ending his dominant weekend for Andretti Autosport. Herta topped the first two practice sessions, won the pole and his team was in “a league of our own.” He was gaining on Ericsson and had a potential go-ahead pass on the horizon when he crushed his car. Herta buried his head in his hands in stunned disbelief.

“We had the car all weekend to win,” Herta said. “I just threw it away.”

Dixon was second to give Chip Ganassi Racing a 1-2 finish. James Hinchcliffe, Ryan Hunter-Reay and Graham Rahal rounded out the top five.

The Grand Prix was the first new street course race added to the schedule in 10 years and enough fans to fill Nissan Stadium packed grandstands, partied near live music stages, and lined fences 10 rows deep with cameras raised to snap a picture of the fastest newcomers in town.

“If there’s enough alcohol out there, it’s going to be a good show no matter what,” Dixon said.

The best seat in the house might have come without one, when fans stood high on the stadium concourse for a bird’s-eye view of one of the 11 turns on the track.

The 2.17-mile course weaved through the stadium parking lot and over a 3,500-foot straightway that spanned over the Korean War Veterans Memorial Bridge and suspended 80 feet over the Cumberland River.

“The track going downtown was so cool to race on,” Ericsson said.

Better safe than sorry, dive teams and boats were on standby in case of emergency.

The chaos was contained to the asphalt streets.

Team Penske drivers brought the race to a halt only a few laps later from Ericsson when Will Power dipped inside Simon Pagenaud and drove his teammate into the wall. That led to a massive 10-race pileup and the red flag was out for roughly 20 minutes.

There were nine cautions and two red flags in the race.

“There was no flow to the race. It was like we had six races,” Dixon said.

Palou holds a 42-point lead in the standings over Dixon.

Jimmie Johnson continues to hit bumps in the road — or in his case, on a bridge — in his rookie season in IndyCar. Johnson destroyed his car in the morning practice session for his second wreck of the weekend and was forced to use a backup car. He used a backup car shared by teammate Palou. He was collected in the Penske crash and was disqualified when the No. 48 crew worked on his Honda — Johnson even helped carry spare parts — under the red flag. Johnson was 26th.

“I’m having a blast, I’m learning a ton and every week I’m getting better and better,” Johnson said.

McLaren Racing will purchase a majority stake of the Arrow McLaren SP race team by the end of 2021 and plans to add a third car to its IndyCar lineup.

The team fields cars this season for Pato O’Ward, who was second in the points standings headed into Sunday’s Music City Grand Prix, and Felix Rosenqvist. Zak Brown, the CEO of McLaren Racing, said Sunday he would like to add another full-time car in 2023 — perhaps as early as next season “if we can find the right combination.”

“We’ve got the resources, so the economics are not a concern, but we want to run three cars that win races and compete for the championship,” he said.