Maryland Gov. Larry Hogan isn’t letting his latest battle with cancer get him down.

“No pain, no gain. Play like a Raven,” Hogan tweeted Saturday following a procedure to remove cancerous cells from his face.

The tweet included a photo of himself with a bandage on one side of his face, giving a thumbs up while donning Baltimore Ravens gear ahead of the NFL team’s playoff game against the Buffalo Bills (which Buffalo won 17-3).

Hogan, who celebrated five years of being cancer-free last summer following a battle with non-Hodgkin’s lymphoma in 2015, was recently diagnosed with early-stage skin cancer known as basal and squamos cell carcinoma, FOX 5 in Washington, D.C., reported.

On Wednesday, the Republican governor called the outpatient procedure “minor” and said he likely wouldn’t need any more treatment, the Baltimore Sun reported.

Hogan had some skin removed a few weeks ago and in 2018. He said his most recent procedures were “another pop-up of that stuff. But it’s nothing serious,” the Sun reported. 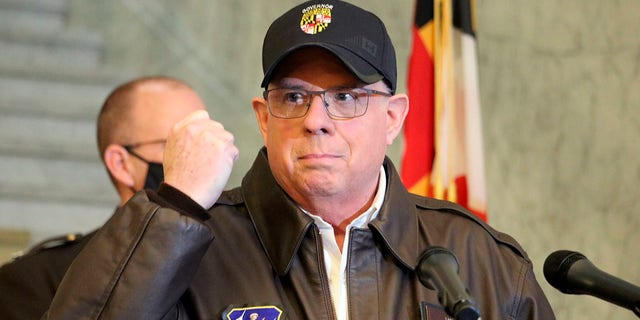 Hogan has managed to take care of his duties as governor despite the medical procedure. On Friday he declared a state of emergency in Maryland, which borders D.C., amid heightened security measures ahead of President-elect Joe Biden’s inauguration Wednesday, according to FOX 5.

He previously called on President Trump to resign after the deadly riot at the U.S. Capitol on Jan. 6.