With a net worth of $15million (around £13million) according to Celebrity Net Worth.com, it’s no surprise Matt Lucas has lived in some incredible homes. The Great British Bake Off presenter is known for starring alongside David Walliams in British sketch comedy series, Little Britain. He has also featured in Shooting Stars, Mash and Peas, Gavin & Stacey and Kath & Kim.

The 48-year-old, who was born in Paddington, London, used to live with his Bridesmaids co-star actor Rebel Wilson in West Hollywood.

However, he also used to own his own property in Beverly Hills which he sold in 2019.

The beautiful Hollywood pad was on the market for £2.62million for just under a year before it was sold.

The home was located near the famous Sunset Strip in Los Angeles and had two storeys. 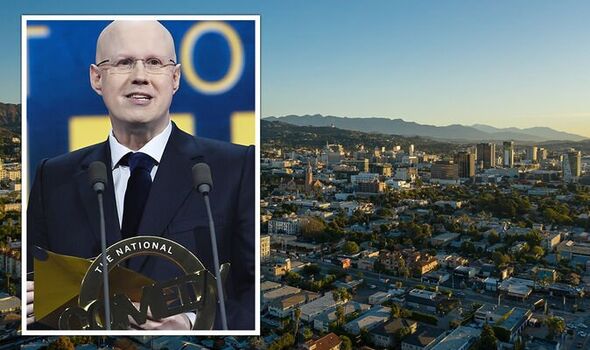 Matt bought the home in the Hollywood Hills in California for £2.36million in July 2017.

The average listing home listing price in West Hollywood is an eye-watering $1.3million (£1.13million), according to Realtor.com.

The incredible home has both views of the Hollywood hills and the ocean and included a large fresh saltwater pool.

The property also contained two living rooms. One was decorated with gold curtains and cushions and the other had purple chairs and a purple sofa.

The home also had four bedrooms and had been tastefully decorated throughout with neutral paint colours.

The kitchen was impressive with dark wood cupboard doors and white marble worktops.

The kitchen also included a state-of-the-art fridge, a double oven and a built-in microwave.

An island in the centre of the kitchen had a gas hob, a stainless steel sink and a wine cooler built into it.

Another larger sink could be seen opposite the island along with views of the beautiful gardens through a window.

Double patio doors lead out into a small courtyard area with rattan seating and more plants.

A huge sweeping staircase leads up to the first floor of the home where guests can find their bedrooms.

The master bedroom has a giant queen-size bed in it, an ensuite and double aspect windows.

The ensuite was plush with a large bath, a massive walk-in shower, twin sinks and a large mirror taking up most the wall.

Outside, the pool had a built-in jacuzzi and there’s plenty of terrace seating for those that like catching the sun.

In the corner of the patio is a barbecue and kitchen area with lots of lemon trees around it.

The pool area has plenty of privacy with palm trees and other plants creating a canopy over parts of the pool.