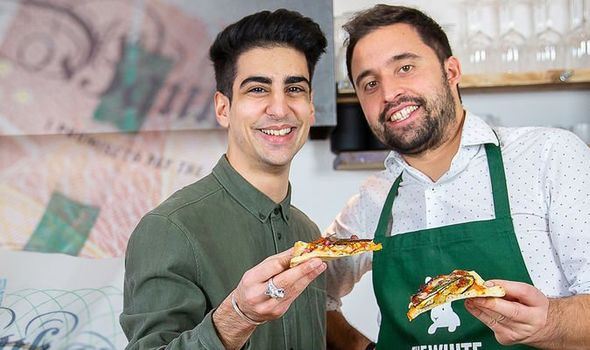 Matteo Ferrari and Nick Croft-Simon met in 2013 when working together at a pizza pub in Oxford. Just eight years on, the pair have built an ever-growing multi-million-pound pizza company, with products stocked in nationwide supermarket chains.

Matteo grew up making authentic Italian pizza at his family’s restaurant from a young age.

As a boy, he would spend his days mastering the art of making mouth-watering toppings and perfect pizza dough at his uncle’s pizzeria in Milan.

Fast forward ten years, Matteo was finishing up his studies and working part-time as a chef at a beer and pizza pub in Oxford City Centre.

There he met Nick Croft-Simon, who had recently graduated and was helping out behind the bar.

When Matteo – who Nick calls “the Pizza Maestro”- started working at The White Rabbit pub back in 2013, he used his skills and traditional Italian recipes to refine the existing pizza menu.

This led to the pub being voted the best pizza restaurant in Oxfordshire and gaining a reputation for delicious, authentic pizza.

“Very quickly, Matteo started adding his own flair to the existing pizza menu at the pub, with new flavours and everything he learnt from his heritage,” said 30-year-old Nick.

“Through that, we noticed that a lot of people who entered the pub as a group, often one of them couldn’t enjoy that pizza because of an intolerance to gluten.

“That gave us the first idea to start developing a gluten-free recipe for pizza.”

It was at that moment that White Rabbit was born.

The fledgling entrepreneurs went on to develop a range of chilled, gluten-free vegan pizzas that are available to the masses at hundreds of supermarket stores across Britain.

The brand is named after the pub the pair worked at, The White Rabbit, which was named because it is around the corner from where Lewis Carroll wrote Alice in Wonderland.

Launched in 2015, its mission is to create authentic, delicious, Italian food that everyone can enjoy whatever their dietary needs or lifestyle.

As well as being gluten-free, many of its pizzas are dairy and soy-free.

They have won a clutch of top foodie awards, including Great Taste, organised by the Guild of Fine Food and widely acknowledged as the benchmark for fine food and drink.

Snapped up by Sainsbury’s and Waitrose, White Rabbit is now sold in more than 750 stores UK-wide.

That’s thanks to a 15-strong team at the brand’s purpose-built artisanal bakery in a village near Oxford, which the duo owns and are regularly expanding to keep up with demand.

“Seeing our pizza in the local supermarket was really exciting,” Matteo said, who is also Managing Director of White Rabbit and oversees the brand’s whole production process.

“Ultimately, we wanted to bring White Rabbit to the retail sector, which lacked young, fun and innovative challenger brands in the chilled pizza aisle.”

The company has been a roaring success, with revenues expected to top £4.1million this year after generating a turnover of £2.8million in 2020.

Ambitious growth plans are on the horizon, including more big-name retailers coming on board and the introduction of new products, such as gluten-free ravioli and frozen pizza.

Matteo gave his thoughts on what makes White Rabbit special.

“In Italy every meal is an event, to be shared by all, and we wanted to carry this into our ethos as a brand,” he said.

“The idea was to have people of all diets around the same dinner table eating the same uncompromised meal, whether they’re coeliac, vegan or an eater of everything!”

Matteo designed their ever-growing artisan bakery from scratch, with nothing but recipes in mind, and this is the foundation of the brand’s competitive advantage.

Nick said: “Having that kind of control over our product is what will ensure it always stands out from the crowd.

“It also means we can be incredibly agile versus the bigger players in our space, constantly adapting to what our consumers want, as well as the wider market in general.”