Jean-Pierre was asked about the menthol ban during a press gaggle on Thursday. Rev. Al Sharpton has previously said such bans are unfair for Black smokers.

“We are aware of that, and we take that seriously the concerns that have been raised about discriminatory policy, policing, and so addressing racial bias in policing is a priority,” Jean-Pierre said.

“This is why we strongly support the George Floyd Justice in Policing Act and we need legislation to directly address police reform, even as we regulate tobacco industry practices that harm Americans,” she continued.

The Food and Drug Administration moved to ban menthol cigarettes and other flavored tobacco products on Thursday in a decision that Health and Human Services Secretary Xavier Becerra said reflects the Biden administration’s “commitment to improve the health of all Americans and to tackle health disparities in our most marginalized communities.” 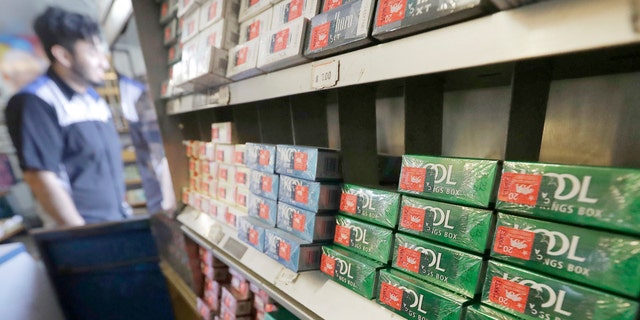 This May 17, 2018 file photo shows packs of menthol cigarettes and other tobacco products at a store in San Francisco. (AP Photo/Jeff Chiu, File)

Jean-Pierre emphasized that such FDA regulation would not result in enforcement on individuals.

“With menthol, this is a public health decision that will help curb addiction and save lives,” she said on Thursday. “But let’s be clear here. If implemented, these rules affect only commercial activity. So FDA does not regulate the possession of tobacco products by individuals for personal use, and this rule would not make individual consumer possession or use of menthol cigarettes a crime nor change enforcement standards.”

The ACLU said a ban would “disproportionately impact people of color.”

In a letter sent to Becerra and other officials, the ACLU along with dozens of others, including the Drug Policy Alliance, said while such a ban is “no doubt well-intentioned,” it would have “serious racial justice implications.”

“Such a ban will trigger criminal penalties, which will disproportionately impact people of color, as well as prioritize criminalization over public health and harm reduction,” the letter stated. “A ban will also lead to unconstitutional policing and other negative interactions with local law enforcement.”

“A number of police encounters resulting in tragic deaths are linked to police enforcement of tobacco laws: Eric Garner, killed by a police chokehold, was illegally selling ‘loosie’ cigarettes, and Michael Brown was killed after being suspected of stealing a box of cigarillos,” the letter stated. “Even in the case of George Floyd, police were called to investigate a counterfeit bill used to purchase cigarettes.”

The letter called for an approach that would “avoid solutions that will create yet another reason for armed police to engage citizens on the street based on the pretext or conduct that does not pose a threat to public safety.”