Michigan Department of Health and Human Services Director Elizabeth Hertel was in Gulf Shores, Ala., according to the Michigan Information & Research Service. Gulf Shores is a popular resort destination along the Gulf of Mexico.

A DHHS spokesperson told Fox News the agency does not “discuss the director’s personal schedule.”

“The sheer brazenness of Gov. Whitmer and her staff is truly something else,” Michigan GOP spokesman Ted Goodman told Fox News.

“The fact that our Governor and her top staff think it’s appropriate to travel out of state on vacation as Michigan faces the worst COVID numbers of any state in the country just reveals the arrogance and condescending nature of this administration. Whitmer’s position on the draconian lockdown orders is simple — rules for thee, but not for me.” 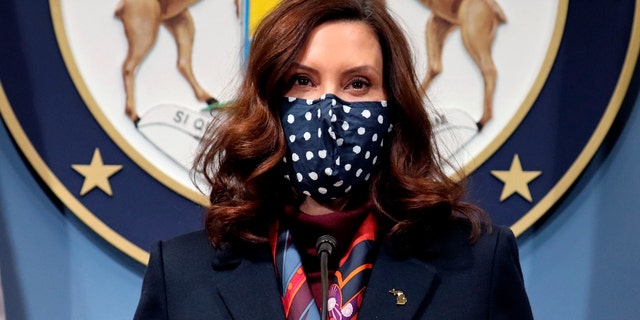 Gov. Gretchen Whitmer addresses the state during a speech in Lansing, Mich. (Michigan Office of the Governor via AP, File)

Tricia Foster, the governor’s chief operating officer, made headlines earlier in April for vacationing in Florida even though Whitmer said she was “concerned” about travel between states. Foster posted photos to Facebook of herself vacationing in Siesta Key. After Breitbart first reported on the trip, Foster deleted the post.

Foster was tasked in January with overseeing the state’s vaccine rollout strategy, according to WCMU.

“We’ve never had any travel restrictions in Michigan, and I’ve just encouraged people that if they travel to be safe, mask up, get vaccinated,” Whitmer said, according to MIRS. “We all need to show one another a little bit of grace. We’re all eager to get out.”

During remarks on April 2, Whitmer recommended that everyone get tested after any kind of travel, even in state. Whitmer has also repeatedly expressed concern about spring breakers traveling to Florida. She urged people returning from the Sunshine State to work from home for a week or have their children learn remotely for a week.

“Yes, I am concerned” about travel between the states, the governor told reporters earlier this month. “That’s why we are really encouraging people to get vaccinated.”

Hertel succeeded Robert Gordon, who resigned suddenly in January after issuing an order to allow indoor dining to resume in the state. Following backlash, Whitmer and Gordon agreed in March to waive a confidentiality clause related to Gordon’s $155,000 severance deal.

Fox News’ inquiry to Whitmer’s office was not returned at the time of publication.