"After careful consideration and interviews with both, the Star Tribune Editorial Board recommends Melton-Meaux, a first-time candidate with strong progressive values that align well with the district, as well as consensus-building skills honed as a professional mediator," the paper announced ahead of the Aug. 11 primary.

"Whether it’s health care, criminal justice or affordable housing, Melton-Meaux appears progressive, but pragmatic," the editorial board explained. "While Omar wants to lead a movement, Melton-Meaux seeks to serve the Fifth District."

The paper unfavorably compared Omar's desire to "defund and even dismantle the police" and pursue Medicare-for-all to Melton-Meaux wanting to "create a system in which police are held accountable for their actions" and build upon the Affordable Care Act.

"As a mediator, Melton-Meaux said he has learned how to talk to different sides 'in a language that’s familiar to them,' offering 'a value proposition they can buy into,'" the Star Tribune wrote of the 47-year-old. "His experience on Capitol Hill, as a fellow with the Congressional Black Caucus, has gained him a valuable window into how skilled leaders work against the odds to bring change." 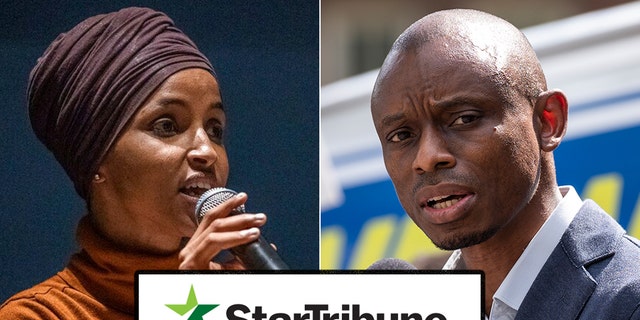 The editorial board also knocked Omar's "missteps," including her inflammatory comments about Israel and her campaign-finance issues, notably claims that Omar sent at least $1.6 million to her husband’s political consulting firm.

"It is just these kinds of ethical distractions that the Fifth District could do without," the Star Tribune continued. "In the Editorial Board interview, Omar took little responsibility for her rocky start, instead largely blaming her critics and saying her failing was perhaps in not realizing what a 'special unicorn' she would be in Congress."

While the paper notes that Omar's background as a Somali refugee is "well-known," it noted Melton-Meaux is the descendant of slaves and mentioned that "his mother grew up picking cotton, and his father used service in Vietnam and the GI bill to put himself through college and lift his family into the middle class." Melton-Meaux later became an attorney and mediator, taking on cases on behalf of foster children.

"Melton-Meaux fully grasps the needs of the diverse constituency he hopes to represent," the endorsement concluded, "and, if given a chance, is the kind of leader who could unite a fractured district."