Second Amendment defended amid liberals’ push for tighter controls on weapons. Chad Jensen and Mike Smith of the Utah Sheriffs Association speak out.

“Missouri is not attempting to nullify federal law,” Parson and Schmitt wrote in a letter to Acting Assistant Attorney General Brian Boynton of DOJ’s Civil Division. “Instead, Missouri is defending its people from federal government overreach by prohibiting state and local law enforcement agencies from being used by the federal government to infringe Missourians’ right to keep and bear arms.”

Schmitt announced he is running for Senate in March. 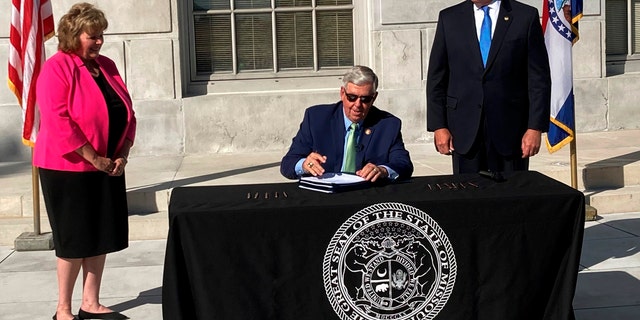 “We will reject any attempt by the federal government to circumvent the fundamental right Missourians have to keep and bear arms to protect themselves and their property. Throughout my career, I have always stood for the Constitution and our Second Amendment rights, and that will not change today or any day.”

Boynton said the law threatens to disrupt the working relationship between federal and local authorities, they said in the letter, noting that Missouri receives federal grants and technical assistance.

“The public safety of the people of the United States and citizens of Missouri is paramount,” Boynton wrote in the letter.

The Justice Department argued in the letter that the state lacks the authority to shield any Missouri businesses or citizens from federal law or to prevent federal law enforcement officials from carrying out their duties.

Boynton said the bill “conflicts with federal firearms laws and regulation” and federal law would supersede the state’s new statute. He said federal agents and the U.S. attorney’s offices in the state would continue to enforce all federal firearms laws and regulations. He asked that Parson and Eric Schmitt, the state’s attorney general, clarify the law and how it would work in a response by Friday.