Congress should send American households another round of checks to help them through the coronavirus pandemic, Senate Majority Leader Mitch McConnell said Tuesday.

“We do envision direct checks again,” the Kentucky Republican told HuffPost at a weekly news conference.

Congress sent most households in the U.S. direct payments as part of the CARES Act, which passed in March — back when lawmakers thought the pandemic might calm down after a few months. Instead, record numbers of Americans are catching the virus daily, threatening a fledgling economic recovery.

The CARES Act sent $1,200 checks to every American earning $75,000 or less, plus $500 for each child in a household. The legislation also created a forgivable loan program for small businesses and expanded unemployment insurance that is set to expire this month.

McConnell declined to say Tuesday who would qualify for the next round of direct payments under the GOP proposal, which is expected to be unveiled later this week. He also did not say whether the payments would match those sent out earlier this year. Earlier this month, he suggested a second round of payments should only go to people earning less than $40,000.

The $3 trillion coronavirus relief package that passed in the House two months ago included provisions for more ― and bigger ― stimulus checks to American citizens, as well as undocumented immigrants.

Senate Republicans, meanwhile, are pushing forward their own legislation, which they hope will cost about $1 trillion. The proposal is said to include over $100 billion for schools, more support for small businesses, and liability protections from coronavirus-related lawsuits. 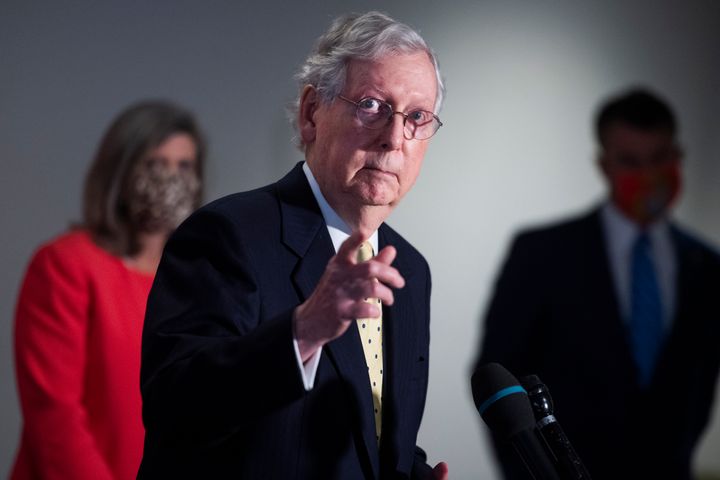 Democrats want Congress to preserve a $600 boost to unemployment insurance that is set to expire this month. Republicans have said $600 is too high, but they haven’t objected to the basic idea of continuing a federal supplement to state unemployment benefits, which average only $364 per week. Some Republicans have suggested converting the benefits into a bonus for people who return to work.

“There’s always room for negotiation because the Democrats aren’t irrelevant,” McConnell told reporters, suggesting there is a deal to be made on extending added benefits at some other level.

When asked about the extra benefits, Treasury Secretary Steve Mnuchin, who has represented the administration in negotiations on Capitol Hill, told HuffPost that he hoped the next piece of legislation would be finished this month. But McConnell laughed at the idea of finishing the bill that quickly.

Mnuchin and White House chief of staff Mark Meadows joined GOP senators at a contentious closed-door lunch on Tuesday, where little agreement was reached on added unemployment benefits, school funding and a payroll tax cut. Few Republican senators support including a payroll tax cut in the package, arguing that it will be largely ineffective because the pandemic has thrown millions of Americans off payrolls — but President Donald Trump has made its addition one of his top priorities.

White House officials are set to begin negotiations with top congressional Democrats, whose approval they need to pass a final package.

“Earlier today I said Republicans are divided. I want to amend that. Republicans are in complete disarray,” Schumer said after the GOP lunch. “Totally incompetent, totally in disarray, totally at war with one another.”

Meanwhile, the extra unemployment benefits are set to expire on July 31. That’s a Friday, and most states pay benefits on the weekend, so many people will receive their final checks in the next week.

“I will lose everything” if Congress drops the $600, said Judy Rodriguez of Miami.

Rodriguez, 40, said she got laid off from her job at a cruise line office in May and has since relied on the benefits to pay all of her expenses. She said she lives with her ailing mother and struggles to sleep at night because she’s so afraid of catching the virus.

It’s possible the extra benefits will lapse even if lawmakers act before the deadline, as state workforce agencies have been slow to implement federal changes. And if Congress blows the deadline, people will be left with only the state-funded portion of their benefits — which in Florida maxes out at $275.

“What are we supposed to do with that?” Rodriguez said.

﻿CORRECTION: An earlier version of this story incorrectly said July 31 is a Saturday.