The tech firm released a video on Chinese social media site Weibo to show off its so-called Space Charging tech. 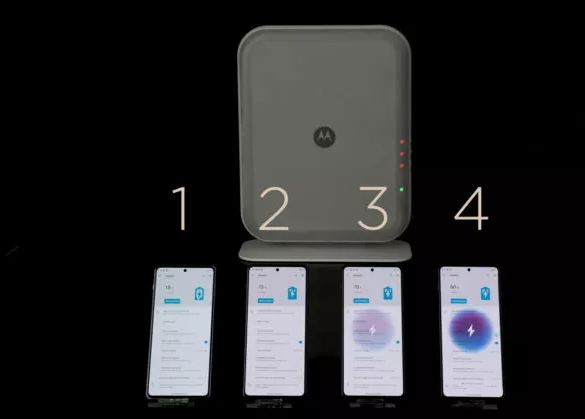 The video was posted to the Motorola Weibo account.

It showed how four phones could be charged at the same time without the need to be plugged in.

The air charging station is said to work from a few metres away.

It has 1,600 antennas and is able to pause charging when a human body is detected in its path.

No official charging speed was given.

However, there's been some speculation that Space Charging can only reach 5W speeds.

The Space Charging device just looks like a WiFi router so could fit into a home without looking odd.

Oppo and Xiaomi have also been working on similar devices.

5W speeds aren't great but a device like this could be better than some wireless chargers which require you to leave your device on a charging pad.

Space Charging gives you more choice of where to put your phone and how many devices you can charge as it's said to provide a 100-degree area of coverage.

In other news, WhatsApp has launched a genius new feature – but it’s only available on Samsung phones.

A Google Maps fan has spotted a “secret” military base tucked away in the middle of the Sahara desert.

And, the next iPhone will come in a new pink colour and start at just under £800, according to recent rumours.