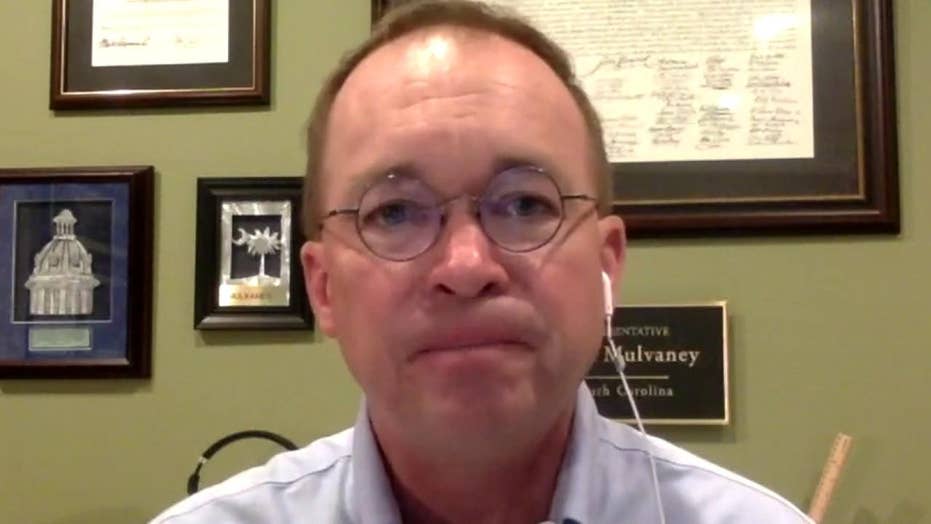 Former Acting White House Chief of Staff Mick Mulvaney argues it will become a presidential race if President Trump can draw contrasts between himself and Joe Biden in respect to the economy.

Former acting White House Chief of Staff Mick Mulvaney has a blunt assessment of President Trump's chances in November’s presidential election, saying the president should hope it doesn't turn into "a referendum" on himself.

“If the president can go back to drawing those contrasts between him and [former Vice President] Joe Biden — that becomes a race between Trump and Biden — I think the president does extraordinarily well,” Mulvaney said Tuesday during an appearance on Fox Business News’ “Mornings with Maria.” “And he shows people, ‘Look, if you hire me, this is what you get. If you hire him, you end up with no jobs.’”

TRUMP IN TROUBLE? POLL NUMBERS HAVE SOME CONSERVATIVES NERVOUS

But Mulvaney stressed that if the general election “ends up being a popularity contest or, worse, a referendum on President Trump, I think he’s got some real headwinds to face.”

Mulvaney – a former Republican congressman from South Carolina – served as the president’s acting White House chief of staff from January through October of last year. Previously, he was confirmed by the Senate in February 2017 as Office of Management and Budget director and currently serves as the United States special envoy for Northern Ireland.

His comments come as Biden — the presumptive Democratic presidential nominee — tops Trump by 8.7 percentage points in an average of the latest national polls compiled by Real Clear Politics. More importantly, Biden enjoys single-digit advantages over the president in most of the states where the race for the White House will likely be won. But the election is still four months away, which can be an eternity in campaign politics

The president has repeatedly pilloried the polls as "fake" and touted, "I am getting VERY GOOD internal Polling Numbers."

And the Trump reelection campaign argued in a memo a week ago that "Public Polling Methodology is Cheaper and Flawed." They’ve repeatedly charged that the surveys under-sample Republican voters.

Presidential elections with an incumbent running for a second four-year term in the White House are often a referendum on that president and his record in office. And right now the 2020 presidential election appears to be a referendum on how Trump has handled the coronavirus pandemic, the economic recovery and the racial unrest that’s swept the nation the past month and a half in the wake of George Floyd’s death.

But the president and the Trump reelection campaign have increasingly painted contrasts in recent months as they target Biden’s record of public service and his proposals for how he’d steer the country.