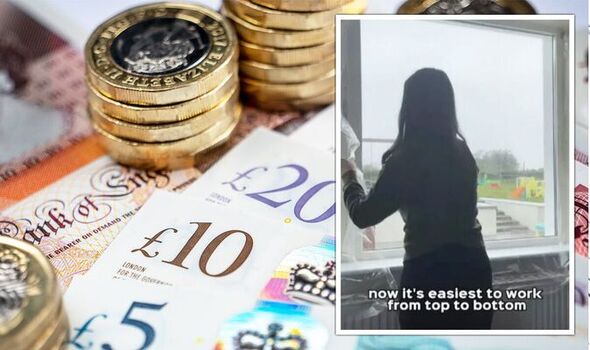 Content creator Shauna is a mummy blogger and “home DIY enthusiast”. She has a huge 192.4K followers on her TikTok account @homediydiary. She told her followers: “This is a budget-friendly way to add secondary glazing/insulation to cold windows.”

While one might be dubious about how effective a thin sheet of plastic might be, it has been found that this strategy works. In 2017, Lidl claimed its £6.99 thermal window foil could save the average family over £100 on their heating bill based on a house with eight windows and spending an average of £1,000 on gas and electricity per year. This would cut the average bill by 13 percent.

A spokesperson for the Energy Saving Trust said at the time that this would work, adding: “In theory, you can use any material for secondary glazing, as long as it is transparent and airtight. Some manufacturers sell plastic secondary glazing kits, but again these will not be as effective as replacing your windows with double or triple glazing, or even having secondary glazing professionally fitted.

“If you have draughts, caused by poor seals, for example, fix these before you install secondary glazing, as this will reduce any impact it would make.”

So how does Shauna do it? She said: “If you have poorly insulated windows, I’m going to show you a really cheap way to add secondary glazing to them and retain heat. First, get your windows squeaky clean, and then use white spirits to clean down the window frame.

Shauna lives in Ireland, but Britons can buy the product too. Some available options are:

Shauna went on: “So stick the tap to all sides of the window frame. And peel off the backing, next take out the glazing film. “This comes in a huge sheet, you might even get two full windows out of this. Cut it roughly to the size that you need but leave it a little bit bigger, you want it to over-hang the tape.

“You want to stick the film to the tape very, very well. Then, pull it tight, removing as many wrinkles as you can.

“Next hold the hair dryer a few inches away from the film and start heating it, working from top to bottom. At first, you’re going to see the film has some wrinkles on it, but once you heat it the film is going to tighten up and the wrinkles will be removed. “Once finished the film is going to be completely see-through and it acts as a secondary glazing to insulate your window.”

Energy bills can be slashed with a number of simple switches around the home. In a recent TikTok video, home and lifestyle influencer Caroline (@Neat.Caroline) offered some small changes.

She explained: “Use LED lightbulbs instead of incandescent ones. They use 75 percent less energy.”

LED lightbulbs are widely regarded as more energy efficient because they produce a low amount of heat. Led also emits light directionally, instead of 360 degrees in the way that incandescent do.