Rupert Murdoch’s Fox News has threatened the ABC with legal action over a Four Corners episode that examined the American cable TV network’s coverage of former US president Donald Trump and its role in the aftermath of last year’s general election. 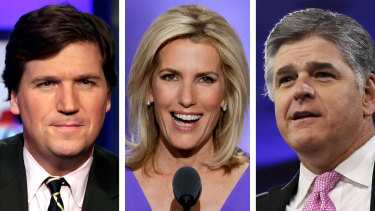 Multiple people familiar with the letter’s contents who spoke on the condition of anonymity said Fox News also disputed any assertions it was responsible for riots that took place at the US Capitol on January 6. It also claimed Four Corners ignored Mr Trump’s criticism of Fox News’ coverage of the election. Fox News’ election desk was the first to call the key battleground of Arizona for Joe Biden, who won the election. The call was aggressively disputed by the Trump administration.

The letter marks the latest escalation in long-running tensions between Australia’s public broadcaster and media outlets controlled by the Murdoch family, which also include The Australian, The Daily Telegraph and The Herald Sun. Fox News is now expected to formalise a complaint with the ABC and the Australian Communications and Media Authority over what it claims is a breach of impartiality rules by the public broadcaster in the episode.

One senior media lawyer said it was not clear what legal options Fox could pursue over the episode in Australia, unless Four Corners defamed an individual or disclosed highly confidential information about the company. An alternative legal avenue is to seek an injunction on the second episode, the lawyer said, but that would be likely to attract more attention to the program. “The legal options are limited,” the lawyer said.

However, Fox News signalled it will also pursue its complaints about the episode with Australian regulators. Under current ABC guidelines, the national broadcaster is required to seek balance, fair treatment, open-mindedness and opportunities for relevant perspectives on matters of contention.

The Four Corners’ episode, which said Fox News had become a propaganda outlet for Mr Trump has been heavily criticised by News Corp’s local publications and columnists such as Chris Kenny and Mark Day since going to air on Monday. Fox News is owned by Fox Corp, a separate company to News Corp, which is also run by Lachlan Murdoch, Rupert’s eldest son.

“The episode clearly violates the basic tenets of the Australian Broadcasting Corporation’s published standards by exhibiting bias and a failure to maintain any level of impartiality in the presentation of news and information,” a Fox News spokesperson said when contacted for comment. “The use of five former deeply disgruntled employees, only one of whom was part of the company during our coverage of the 2020 US presidential election and its aftermath, single-handedly discredits all credibility of the program.

“As for the events of January 6th, implicating Fox News in any way is false and malicious. Congressional hearings this past February and the Biden Justice Department not only did not implicate Fox but other media companies were cited as platforms for inciting and coordinating the Capitol riots.“ 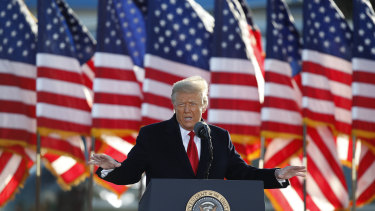 Former US president Donald Trump during the final days of his reign.Credit:AP

The ABC rejected Fox’s claims, saying there are “no errors” or “falsehoods” in the program. “We are satisfied there are none,” a spokesperson said. “The program rigorously complied with the ABC’s editorial policies. Fox Corp and Fox News were repeatedly asked for interviews and declined to take part. Their responses and information they provided are incorporated in the programs.

“News Corp not enjoying scrutiny does not mean the scrutiny is unwarranted. The events around the critical 2020 US Presidential Election and the coverage of it are clearly in the public interest to investigate. The huge role played by Fox News is legitimate to examine.”

The ABC spokesperson said Fox was provided with a detailed outline of the proposed program and that the television network was helpful in providing footage and background material. “The program tried every avenue to get Fox News to provide its point of view,” the spokesperson said. “The program tried for two months to secure an interview with Fox Corp CEO Lachlan Murdoch and made a series of requests for various other senior Fox Corp representatives, as well as for Rupert Murdoch. It also submitted written questions. The responses and information that were provided are incorporated in the program.”

“The story was rigorously tested against the ABC’s Editorial Policies and the ABC stands by it.” The ABC also said it stood by claims Fox had amplified the election fraud storyline and denied that it blamed Fox News for the January 6 riots (Fox News says it called the election accurately for President Joe Biden and ran several programs that scrutinised “stolen election” claims).

News UK, which is also run by the Murdoch family, lost part of a dispute with the BBC this week over a documentary series that implied Rupert Murdoch was a threat to “liberal democracy”. His company complained the program was biased and did not give weight to the positive parts of Mr Murdoch’s career. Most of the complaints were dismissed, by the BBC’s unit did find that the documentary went too far in implying that a series of tabloid stories were related to Murdoch’s decision to back Tony Blair. News UK is now elevating the complaint to the external body Ofcom.