As the nation reckons with symbols of America’s white supremacist history, some Native American protesters in California have renewed calls for the state to reevaluate the legacy of a Spanish colonizer-turned-saint ― Junipero Serra.

Protesters toppled two statues of the 18th-century Roman Catholic missionary last weekend ― one in San Francisco and another in Los Angeles. A third city, Ventura, agreed to demote a statue of Serra from its place outside City Hall to a nonpublic location.

Catholic dioceses have taken a more protective stance towards Serra monuments ― removing his statues in an effort to shield them from vandalism.

The Catholic Church has long defended Serra as a kind-hearted missionary who pressed Spanish authorities to be benevolent conquerors. But Native American groups have called Serra’s legacy into question for years, pointing out that he was the architect of a system that brutalized Indigenous peoples and their cultures.

Now, the removal of Confederate symbols across the South has reenergized calls for California to stop putting Serra on a pedestal. This is happening because protesters are finding connections between the violence that Black and Native American experienced in the U.S., according to Olivia Chilcote, a scholar of American Indian studies at San Diego State University and a member of the San Luis Rey Band of Luiseño Mission Indians.

“The U.S. is a settler colonial nation-state that was built by killing Native peoples and taking their land while also relying on enslaved Africans as forced labor,” Chilcote said. “These two aspects of settler colonialism in the U.S. uniquely tie the Native American and Black communities together.” 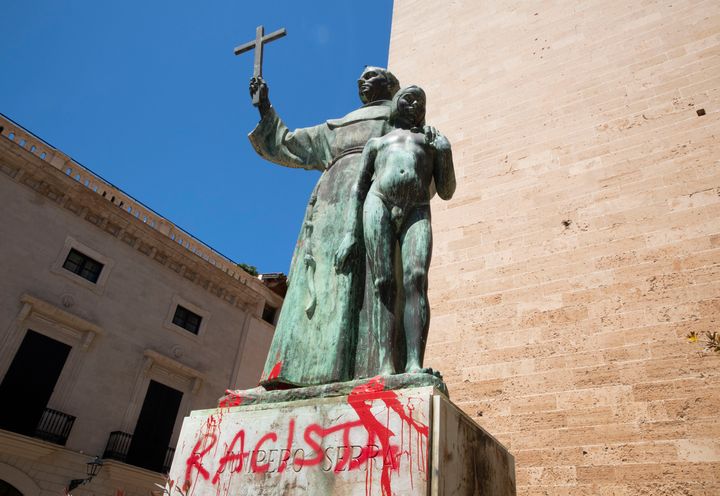 “These statues represent a physical assertion of power over our communities,” said Risling Baldy, who is Hupa, Yurok and Karuk and an enrolled member of the Hoopa Valley Tribe in Northern California.

“[Serra] doesn’t deserve a place of reverence when what he stood for was the killing, removal, genocide, assault and exploitation of Indigenous peoples in California,” she added.

Serra’s legacy as a Catholic missionary is intricately tied to Spain’s colonization of California. Spain’s King Charles III sent both military troops and priests to California in the late 18th century to solidify his hold on the region. As part of that occupying presence, Spanish priests built 21 missions up and down the coast. The goal of these missions was to convert Indigenous peoples to Catholicism and ultimately turn them into loyal citizens of Spain.

After baptism, Native Americans were forced to live at the missions to receive religious and language instruction. Their own customs and beliefs were banned, while their forced, unpaid labor sustained the missions. Those who tried to escape were hunted down and brought back, and those who disobeyed were whipped and put in stocks. Today, some Native scholars compare the missions to slave plantations and concentration camps.

The Spanish arrivals also brought disease to California, wiping out Indigenous people who did not have immunity. Illness, slave labor and separation from their traditional ways of life contributed to thousands of Indigenous deaths during the mission period.

Serra wasn’t just part of that colonizing force ― he helped build it. When the friar first arrived in present-day San Diego, where he founded his first mission, he was accompanied by a Spanish military officer.  Serra built a total of nine missions before his death in 1784.

“Serra orchestrated an attempted genocide of Indigenous peoples in California. He mistreated Native people, and he also watched as soldiers and others from the church abused, raped and assaulted Native people,” Risling Baldy said. “These are things that he wrote about in his own reports and reflections. He was not a good guy.” 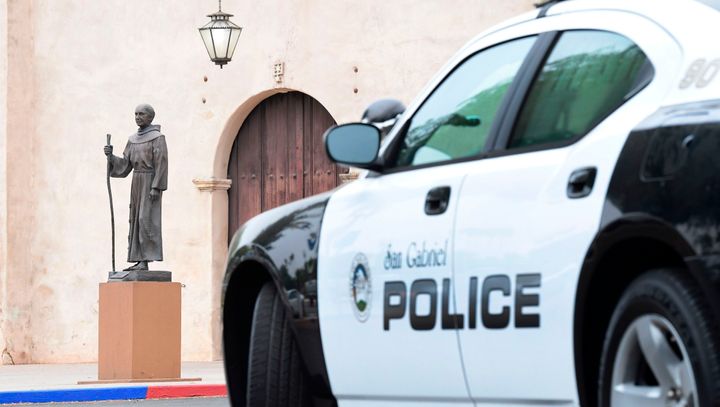 Pope Francis canonized Serra in 2015, making him the first Hispanic American saint. U.S. Catholic bishops have repeatedly defended the priest and the Spanish mission system. Los Angeles Archbishop José Gómez wrote in a letter earlier this month that, although the missionaries “made mistakes and caused real harm to people,” their motives were “evangelical and humanitarian” since they wanted to improve Native people’s lives.

Serra’s sole intention in coming to California was to give Native Americans the “greatest gift he could imagine to offer — the knowledge of Jesus Christ and his salvation,” Gómez wrote. He pointed out that after a Native-led revolt against Spanish rule led to the death of a fellow priest, Serra stepped in to ask for the fighters to be pardoned.

“St. Junípero has long been misunderstood and, in my opinion, wrongly used as a symbol for the tragic abuses committed against California’s first peoples,” Gómez wrote.

California’s bishops echoed Cordileone’s words in a joint statement, arguing that Serra was a man “ahead of his times” who worked against an “oppression that extends far beyond the mission era.”

“If that is not enough to legitimate a public statue in the state that he did so much to create, then virtually every historical figure from our nation’s past will have to be removed for their failings measured in the light of today’s standards,” the bishops wrote. 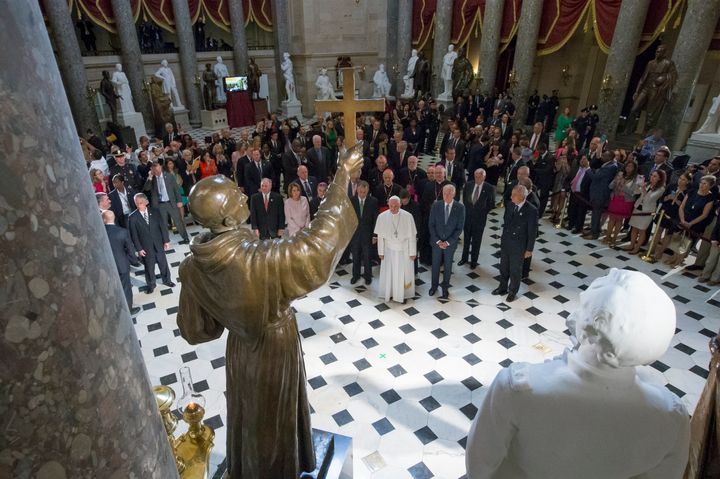 But Native people of Serra’s time found the mission system to be cruel, which is why they resisted it in various forms over the years, Chilcote said. And visitors to the missions ― Europeans and fellow priests, among others ― also wrote about the horrific treatment of Native Americans at these missions.

“So hold him to the standards of his own time then,” Risling Baldy said in response to the bishops’ statement. “Also, I think starving people and beating people and kidnapping people and watching as women and children were raped in front of people is never OK, no matter the time in history.”

The institutions of the Catholic Church are wired to support people it has already canonized since to withdraw support would be to call into question the sometimes centuries-long vetting process for sainthood, according to Natalia Imperatori-Lee, a scholar of Catholic ecclesiology and Latinx theology at Manhattan College. There were protests around Serra’s canonization, but many Catholics ultimately saw it as a step forward because the church has such a paucity of so-called New World saints that adding one seemed like a victory, she said. But the problem is that with Serra, the church added someone intimately involved in the violence of colonization.

“Whatever the intent of the Catholic colonizers, and to be sure some expressed a ‘benign’ desire to save souls, the violent means of accomplishing this salvation still scars the nation and the church,” she said. “After all, even after the Native Americans (who weren’t exterminated) had converted, they were not admitted into seminaries because the belief was they could not be taught spiritual truths like theology.” 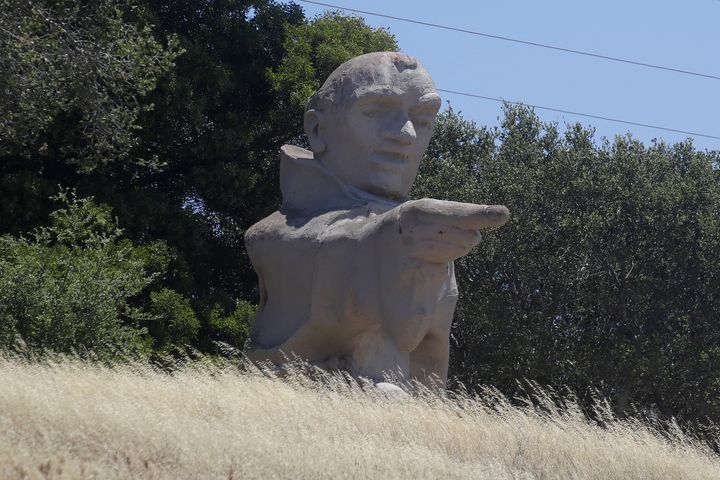 Stories about Serra contribute to a “mission fantasy fairy tale” about California’s history, according to Angel M. Hinzo, an assistant professor in ethnic studies at the University of San Diego. This romanticized history “erases genocide and violence,” she said.

“Learning the mission fairy tale today does many people in California a disservice since it erases the actual history of California and prevents the opportunity to understand the impacts of this violence and the resilience of contemporary Native American communities,” she said.

Serra is still very much present in California society. There are schools, streets, parks and buildings named after him, along with numerous Serra statues. Until recently, fourth-graders in the state learned about Serra and the Spanish missions by building tiny replicas of the sites using household objects ― a project that some Native scholars compare to having children build Southern slave plantations for school projects.

But there have been some recent signs of change. Last year, Gov. Gavin Newsom issued an apology for the historical mistreatment, violence and neglect of California’s Native American peoples in the early decades of California’s statehood. California revised its fourth grade curriculum in 2017 to drop the missions project. Stanford University changed the name of buildings named for Serra. The University of California, Santa Cruz, removed a mission bell from its campus.

After years of student activism, the University of San Diego, a Catholic institution, changed the name of Serra Hall to Saints Tekakwitha and Serra Hall. St. Kateri Tekakwitha is the first Indigenous Catholic saint from North America.

Hinzo said she would be “ecstatic” if Serra’s name was dropped completely.

“As a Native American faculty member who teaches California Indian history and Native studies, I cannot describe how troubling it is to teach this material in a building named after an individual complicit in the massacre of California Indian people,” she said. 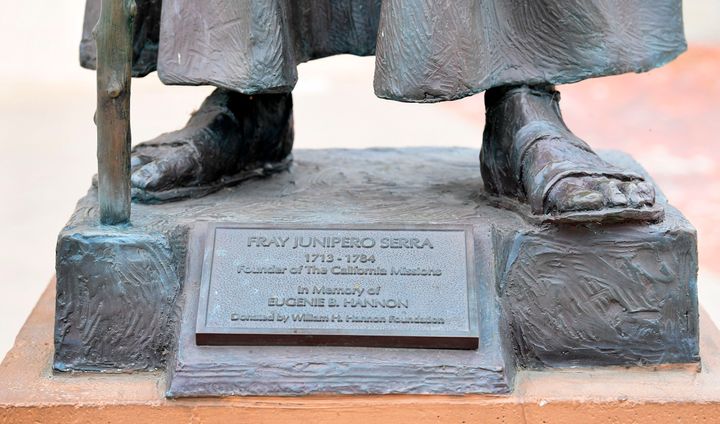 The Catholic Church has much work to do to confront its complicity in white supremacy, Imperatori-Lee said.

“Along with the nation, the church has to enter a period of deep self-examination, of listening to colonized communities, of appreciating the violent and traumatic legacy of colonialism,” she said. “The bishops would do well to invite those activists into dialogue and to stand with those who feel completely dispossessed. It’s what Jesus did.”

Risling Baldy said that for the church to truly grapple with its past, it would need to make concrete commitments ― such as returning land and resources to Indigenous peoples and providing monetary support for the revitalization of their languages and culture.

“The church has money, and it’s time that they start to support Indigenous peoples in their movements for decolonization with real funding and with land return,” she said.