Shares in Rupert Murdoch’s News Corp tumbled by more than 11 per cent on the ASX after the company’s quarterly financial results disappointed investors and raised concerns about the impact of volatile economic conditions on the media company.

News Corp, which owns local mastheads The Australian, The Herald Sun and The Daily Telegraph and owns stakes in Foxtel and wagering company Betr, reported a 75 per cent fall in quarterly net income to $US66 ($101.6) million from $US267 million a year earlier, with revenues falling four per cent to $US2.48 billion. 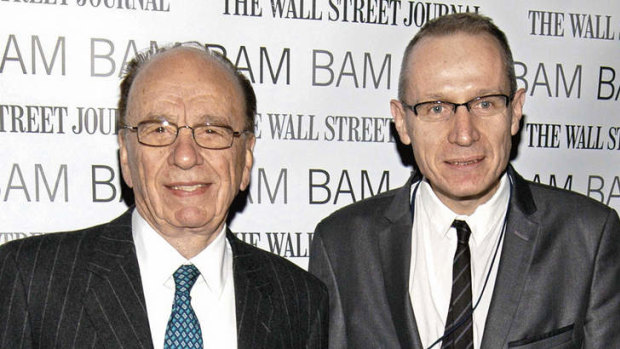 “I think the market was shocked by the magnitude of the earnings falls in News Media and Books, and management’s understandably cautious near-term outlook,” Morningstar analyst Brian Han said. “There’s likely to be some consensus downgrades, but I don’t think News Corp’s sustainable earnings power is compromised that much.”

The dip in revenue was attributed to the higher US dollar, which reduced the value of its international income, and weakness in book publishing, caused by Amazon cutting book inventory levels. Adjusted revenues increased three per cent. News Corp chief executive Robert Thomson said the issues were “ephemeral, not eternal”.

There were green shoots in Australia though, with the local arm of News Corp hitting 1 million digital subscribers for the first time and increasing revenue by one per cent in the first quarter, which ended on September 30. News Corp Australia executive chairman Michael Miller said the advertising market was short, but he expects more money to come from car manufacturers and the financial sector as refinancing becomes more prevalent.

He said hitting the milestone showed the business was sustainable and claimed the company had no plans to change the price of subscriptions. “I do think that people are accepting that prices are increasing as costs are increasing,” Miller said. “You want to have an audience that stays with you – you don’t price them out of the market, but Australians have shown they are prepared to pay as well.

“We continue to review that. We have no plans at the moment, but we do see competitors in the broader reccurring revenue market – Disney, Amazon Prime – increasing prices, so you’ve got to look at that as being an indicator.”

Miller said there was also more opportunities for bundling different publications within the News Corp stable together as a way to drive further subscriber growth. News Corp already bundles its metropolitan masthead subscriptions and offers subscribers of The Australian free access to The Wall Street Journal and youth publication, The Oz.

He said there were opportunities to bundle packages with sports publication Code, puzzles and racing information sites such as punters.com.au.

“There are opportunities to do more bundling in a tighter wallet market, which we’re entering into, I think that people do look for value and bundling becomes more prevalent,” he said.

Thomson used the first quarter result to focus on Foxtel’s changing business model, revealing about 25 per cent of total revenue for the business came from streaming services such as Binge, Kayo Sports and Flash. Foxtel grew its subscribers to 4.5 million in the first quarter, which was largely due to the release of Game of Thrones′ prequel, House of Dragon.

News Corp announced in October it had set up a special board committee of independent directors to assess a deal that would combine Fox Corporation, which runs the cable TV network and wagering company FoxBet, with the traditional publishing and real-estate assets. Thomson said it would not disclose developments regarding the transaction under disclosure was “appropriate” or “required”.