If you’ve ever examined a car’s window sticker, there’s usually something added onto the vehicle’s final MSRP called a “destination and delivery” fee. And it looks like those fees are increasing fast, according to a new Consumer Reports investigation.

After researching industry data from ChromeData, Consumer Reports found that destination fees jumped from an average of $839 in 2011 to $1,244 in 2020, the outlet’s Mike Monticello wrote. “That’s more than 2.5 times the rate of inflation,” the story said.

In general, the fees cover the cost of delivering the car from the factory to ports (if necessary) and then to the dealership as the final destination. Yet “it’s not at all clear exactly what they cover, how they’re determined, or why they should be treated any differently from, say, the cost of equipping a car with a steering wheel,” Consumer Reports wrote.

On window stickers, the fees are not added to the vehicle’s advertised base MSRP. Rather, they’re a line item — as though they’re an optional extra — despite being non-negotiable. 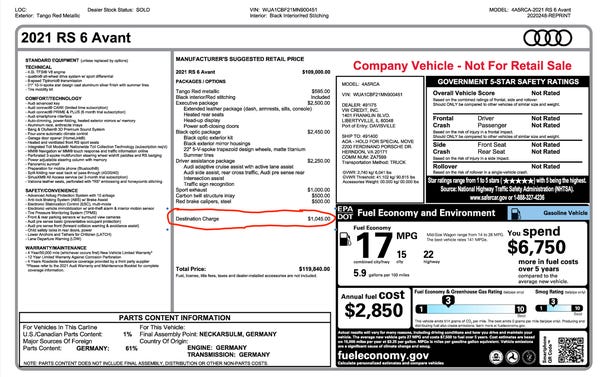 A GM spokesperson told Consumer Reports that the cost of logistics and freight had increased and, because more and more people are buying big trucks and SUVs, fewer vehicles can physically fit on rail cars and carriers. A Ford spokesperson also cited trucks and SUVs as a reason and added that there’s “high demand for shipping and a shortage of skilled drivers.”

When Consumer Reports asked how destination fees are calculated, nearly all of the automakers it contacted answered in “vague” ways. “None would provide a detailed breakdown of how they calculate the fees on any particular model,” it found.

Consumer advocates, Consumer Reports wrote, believe that the rising fees are “just a way for automakers to boost the bottom line without officially raising prices.”

So what are you, the consumer, supposed to do with this knowledge? Especially if the fees are non-negotiable?

Consumer Reports recommended that you do your research thoroughly so you know there’s a fee going into the transactional price, and understand that while the fee itself is non-negotiable, the “out the door” price is.

“Negotiate the bottom line, not the destination fees,” the outlet suggested. “Don’t be shy about asking for a reduction; car dealers expect you to haggle. Aim to get the price down by $1,000 or so to offset the destination charges.

You can read the full Consumer Reports story here.