Regular washing and drying can make towel fibres stiff and scratchy, but knowing which washing temperatures to use, how to load the washing machine, and which products to opt for can restore softness to towels, and prevent them from entering that state again. Tom Drake, DIY expert at Only Radiators has shared his top laundry tips to “keep towels soft and fight the crunch”.

He said: “Towels can feel hard and stiff due to the build up of soap and detergent which causes a less absorbent layer on your towels. You may think that a lot of fabric softener and a hot wash will keep your towels fresh, but this can actually have the opposite effect.”

For soft, fluffy towels, pay attention to the wash temperature, checking the laundry symbols on the labels of all towels before they go into the machine.

Tom said: “You may think that hotter temperatures are better for cleaning clothes, but for towels the optimum temperature is between 30 to 40 degrees. Warm water absorbs detergent better, in turn leaving less chemical child up on your towels, which makes them feel stiff.

“Although washing your towels at higher temperatures is the most efficient way to get rid of germs, 30 or 40 degrees will still eliminate most of your bacteria and preserve your towels fibres.” 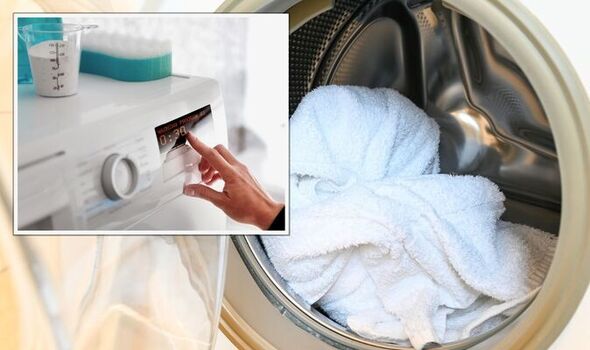 It is also worth noting each towel is different and requires different treatment. Be sure to read the label before washing so that you can maximise the effectiveness of the wash and prevent ruining the towel.

Households should also avoid overfilling their washing machine if they want fluffy towels as this won’t allow enough room to rinse out all the dirt and detergent.

The expert explained: “This is the general rule of thumb for all washing loads, including bed sheets, as the fabrics will need room to breathe. The optimum number is two or three bath towels at a time.”

Fabric softener is an enemy to towels as they are the reason why towels become “less absorbent” according to Tom.

He said: “Fabric softener will coat the fibres of the towel and build up over time which causes towels to feel hard and become less absorbent.

“Soften with towels in a load of just white vinegar once every few weeks to remove the soapy residue that causes your towels to feel hard. One cup of white vinegar will be enough for this process.”

The expert suggested replacing fabric softener with baking soda as this is what will loosen the fires on towels.

He explained: “Baking soda not only helps to brighten up your towels and keep them soft, but it also keeps odours at bay. Half a cup of baking soda per load will do the trick, along with your normal detergent.” 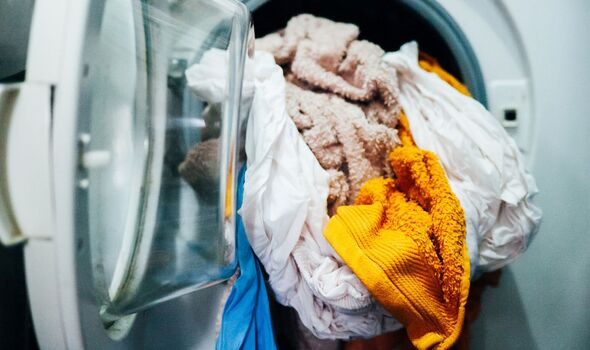 Too much harsh heat can damage the cotton of your towels, which can be another reason why they feel hard and stiff.

Tom suggested that Britons “skip the tumble dryer stage”. However, for those who are reliant on the appliances to dry their towels, the expert advised trying a “lower heat setting” or a “shorter cycle”.

The expert added: “Line washing is the most environmentally friendly way to dry towels, so if you’re drying them this way, you should shake the towels once they’ve dried to fluff them up.”

Shaking towels is a simple, quick step in the washing routine that can have a huge impact on their softness. 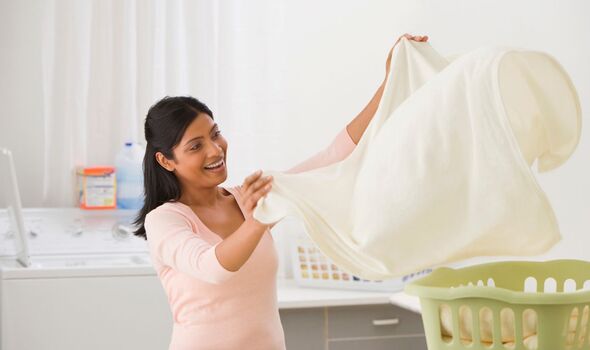 This will open up the fibres slightly, allowing the detergent to sink inside every pore and make them super clean.

Once households have perfected the washing and drying routine, the final step in keeping towels soft is storing them correctly.

Tom said: “Storing towels side by side instead of in stacks will ensure that the bottom towels aren’t crushed by the ones above. To prevent this from happening, you can store towels on heated towel rails.”

Add a few drops of lavender or other essential oil to towels before storing to keep them smelling gorgeous.