The chief executives of Melbourne and Brisbane’s international airports doubt Qantas will be able to relaunch most of its overseas network on October 31 as planned, but are hopeful there will be more travel bubbles by the end of the year.

Australia will pass a major milestone on Monday morning when hundreds of travellers fly to New Zealand without needing to go into quarantine – the first time that has been possible since March 2020 – under the newly established trans-Tasman bubble. 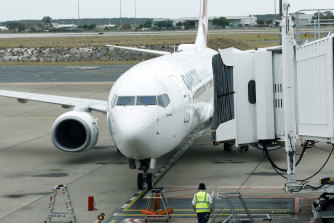 Australians can travel freely to New Zealand from Monday but the timeline for going anywhere else is up in the air. Credit:Tertius Pickard

But the delays plaguing the country’s COVID-19 vaccination program have disrupted the timeline for when Australians will be able to travel further abroad or welcome visitors from other overseas destinations.

Qantas is selling tickets to 22 overseas destinations from October 31 based on the government’s original timeline for completing the vaccine rollout, with the airline’s CEO Alan Joyce saying last week that an international relaunch could still be possible by then.

Brisbane Airport chief executive Gert-Jan de Graaff said that while he wished Qantas’ plans become a reality – especially given international traffic made up half his pre-COVID revenue – he considered it unlikely.

“We will see a strong recovery on the trans-Tasman in the next month but no international to other countries of any real significance before the end of this calendar year,” he said.

Mr de Graaff said it was clear that Australia would continue to take a highly conservative approach to preventing any further COVID-19 outbreaks in the community which, combined with the delayed vaccine program, meant borders would remain firmly shut to most of the world until 2022.

“As soon as the borders are open we will see COVID come into the country whether we like it or not,” he said. “Hence, I think we will make sure a significant part of the adult population is vaccinated before we even consider opening up to other countries.”

Melbourne Airport CEO Lyell Strambi said Qantas’ plans to restart flying to the rest of the world was “pretty optimistic” but declined to give his own timeline, saying the path to safely reopening was too uncertain.

“I think we should be aiming to be open as quickly as we can but we won’t open to everywhere, that’s very clear,” he said.

Mr Stambi said Australia should be open to more than just COVID-free countries such as New Zealand by the end of the year. That could be safely managed, he said, by implementing different rules for each nation depending on its level of COVID transmission, including risk-based quarantine, isolation, proof of vaccination, and pre- and post-flight test requirements.

”There will be some risk of transmission the more we open up to the world. But… as more of us are vaccinated, yes we’ll get the virus but it won’t be a bad dose of the virus,” he said.

Mr de Graaff thought it was possible Australia could open to more countries that also had COVID-19 under control, such as Singapore, by the end of 2021 or in early 2022.

Melbourne and Brisbane were the second and third busiest international airports in Australia before COVID after Sydney Airport. Together they accounted for 41 per cent of all overseas arrivals and departures in 2019, just ahead of Sydney (40 per cent).

As well as the economic damage Australia would suffer by keeping its border closed, Mr Strambi said there was a risk foreign airlines – many of which had shrunk their fleet during the COVID shut down – will redeploy their aircraft to other markets that open up sooner and never come back.

Mr Strambi said Prime Minister Scott Morrison’s idea floated last week of allowing vaccinated Australians returning from overseas to isolate at home rather than go into hotel quarantine would be an improvement on the current system, but would still be a major roadblock to going overseas for many people.

“Any level of quarantine or home isolation is not going to work for certain markets,” he said.

Qantas, its budget arm Jetstar and Air New Zealand have jumped at the opportunity to reboot their mothballed international operations and have scheduled hundreds of flights every week between Australia and New Zealand from Monday.

Qantas will be flying about 80 per cent of its pre-COVID capacity across the Tasman while Air New Zealand will be closer to 50 per cent, with the ability to ramp up capacity based on demand.