House Speaker Nancy Pelosi, D-Calif., told reporters during a news conference on Oct. 29, 2020 that she’s confident Joe Biden will beat President Trump and Democrats are ready to work with Biden on fighting the coronavirus.

House Speaker Nancy Pelosi projected Thursday that Joe Biden would win the White House and said Democrats are ready to work with him on a transition agenda to tackle the coronavirus pandemic, address the economic fallout and pass an infrastructure agenda.

"I feel very confident that Joe Biden will be elected president on Tuesday," Pelosi, D-Calif., said at a news conference at the Capitol, while acknowledging counting votes may continue past Nov. 3.

"On Jan. 20, he will be inaugurated president of the United States. So while we don't want to be overconfident or assume anything, we have to be ready for how we're going to go down a different path."

She said Democrats have a science-based approach to crush the virus.

"We are confident. We are calm. And we are prepared. We are ready," Pelosi said of the election.

Pelosi praised the wave of early voting underway as a "joy to behold." But she also warned Americans to no longer send their absentee ballots in the mail because it's too late to get them counted, suggesting voters should either vote in person or drop off their ballots at designated locations. 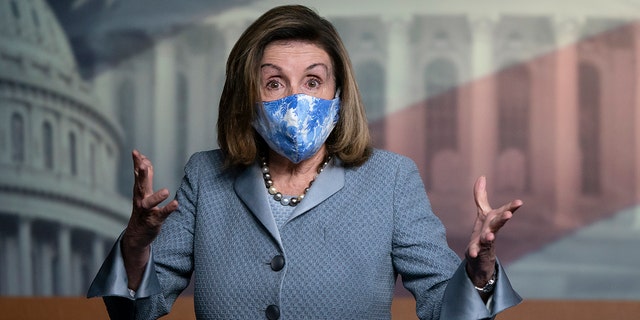 "I hope that people will not depend on the mail because they have done all they can to dismantle the postal system," Pelosi said. "I salute our postal workers and letter carriers and those who are making the best of the situation, but even the Postal Service is saying it's too late now to mail a first-class piece of mail."

Pelosi blasted President Trump for sowing doubt on the credibility of elections and called out GOP lawmakers for not putting more money into elections.

"It is appalling to see the obstacles to participation that the Republicans and the president are putting in the way," she said, citing long lines at early voting locations as one example.

"It's a discourtesy to the American people to say: 'You go stand in line for hours. We can do something about it. But your time is not worth anything to us.'"

Pelosi described the devastating health and economic toll the coronavirus has taken on the United States this year and how Democrats have a plan in place, known as the multitrillion-dollar Heroes Act, to turn the tide.

"We've come to a fork in the road when it comes to the coronavirus," Pelosi said. "The president has taken us on a deadly path. The Heroes Act takes us on a scientific path to help save the lives and livelihoods of the American people."

Pelosi has been in last-minute talks with the Trump administration to get a roughly $2 trillion stimulus deal passed this year, but she said differences still remain on state and local funding, testing strategy, unemployment insurance and more. But she signaled she'd still like to strike an agreement with the current president to have as "clean" a slate as possible heading into a potential Biden administration.

Aside from fighting the virus, she previewed part of the House Democrats' agenda under a Biden administration, including passing legislation to "build the infrastructure of America in a green way," expanding health care access, lowering the cost of prescription drugs and passing H.R. 1, the House Democrats' major voting rights and anti-corruption legislation.