House Speaker Nancy Pelosi’s January phone call with U.S. Army Gen. Mark Milley, chairman of the Joint Chiefs of Staff — in which Pelosi raised concerns about what she described as an “unhinged” President Trump — is now the subject of a Freedom of Information Act (FOIA) lawsuit.

Watchdog group Judicial Watch announced its legal action this week, saying the call between the House speaker and the nation’s top military officer – regarding the powers of a sitting president – set a “dangerous precedent” that could affect future presidencies.

The group said its Jan. 11 request for information regarding the Jan. 8 call between Pelosi and Milley received no response from the Department of Defense.

Soon after the phone call, which ocurred two days after the riot at the U.S. Capitol, Pelosi described the purpose of the conversation in a letter to her Democratic colleagues. 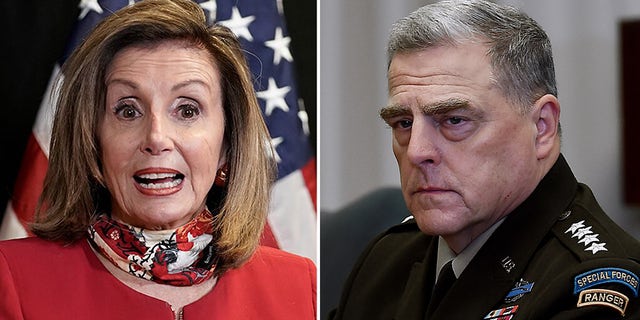 “This morning, I spoke to the Chairman of the Joint Chiefs of Staff Mark Milley to discuss available precautions for preventing an unstable president from initiating military hostilities or accessing the launch codes and ordering a nuclear strike,” Pelosi wrote. “The situation of this unhinged President could not be more dangerous, and we must do everything that we can to protect the American people from his unbalanced assault on our country and our democracy.”

Later, she added: “As you know, there is growing momentum around the invocation of the 25th Amendment, which would allow the Vice President and a majority of the Cabinet to remove the President for his incitement of insurrection and the danger he still poses,” Pelosi wrote. “Yesterday, Leader Schumer and I placed a call with Vice President Pence, and we still hope to hear from him as soon as possible with a positive answer as to whether he and the Cabinet will honor their oath to the Constitution and the American people.”

In a statement, Tom Fitton, president of Judicial Watch, said that if Pelosi’s description of her conversation with Milley is accurate, their discussion “sets a dangerous precedent that could undermine the president’s role as commander in chief and the separation of powers.”

“Our new lawsuit aims to uncover the truth about the call,” Fitton added.

According to Judicial Watch, the lawsuit requests access to “any and all records” regarding the Pelosi-Milley phone call as well as “any and all additional records” of communication between them from Nov. 1, 2020 to the present day.

Whether Trump was ever denied access to the launch codes while still president in unknown. But on Jan. 13, one week after the Capitol riot, the U.S. House of Representatives impeached Trump for a second time, charging him with “inciting an insurrection,” in relation to the riot.

The Senate acquitted Trump on Feb. 13, just as it did following his first impeachment, when he was accused of obstruction of Congress and abuse of power, relating to a phone call with the president of Ukraine.

The Judicial Watch lawsuit was filed in the U.S. District Court for the District of Columbia.