Former Vice President Mike Pence tells FOX Business’ Maria Bartiromo ‘at the right time’ he will ‘reflect and consider’ how he will participate in the next presidential election.

Former Vice President Mike Pence on Tuesday did not rule out a run in 2024 while speaking during an exclusive interview on FOX Business' "Mornings with Maria," saying that "at the right time" he will "consider" how he "might participate in that process."

Pence made the revelation after host Maria Baritromo asked the former vice president if he wants former President Trump to run in 2024 and if he is looking to get back into leadership.

"All of my focus right now is on 2022," Pence responded. "I think we have a historic opportunity to reclaim majorities in the House and Senate, to elect great Republican governors around America and, in 2023, I’m confident the Republican Party will nominate a candidate who will be the next President of the United States of America and at the right time, my family and I will reflect and consider how we might participate in that process."

"But now more than ever with war in Europe and with an administration seemingly intent on weakening our country, driving our nation toward a European-style welfare state, we need strong Republican majorities on Capitol Hill and strong Republican governors and that’s what we are going to work to achieve," he continued.

During the interview Pence also focused on the Biden administration’s energy policies and stressed that the "time has come to sanction all oil and energy exports from Russia."

He argued that the move is necessary given energy is the "lifeblood" of the country's economy."

Pence called on Congress, the Biden administration and nations around the world to implement an international embargo to "bring the kind of pressure that we must bring to bear if we hope to stop this mindless, senseless Russian invasion of Ukraine."

Speaking from Israel on Tuesday, Pence also argued that Vladimir Putin "felt emboldened to redraw Europe by force" and that the Russian president is the only person to blame for the war with Ukraine.

Pence spoke with Bartiromo the day before his policy and advocacy organization launched a $10 million ad campaign, targeting multiple congressional Democrats and pushing for American energy independence amid Russia’s invasion of Ukraine. 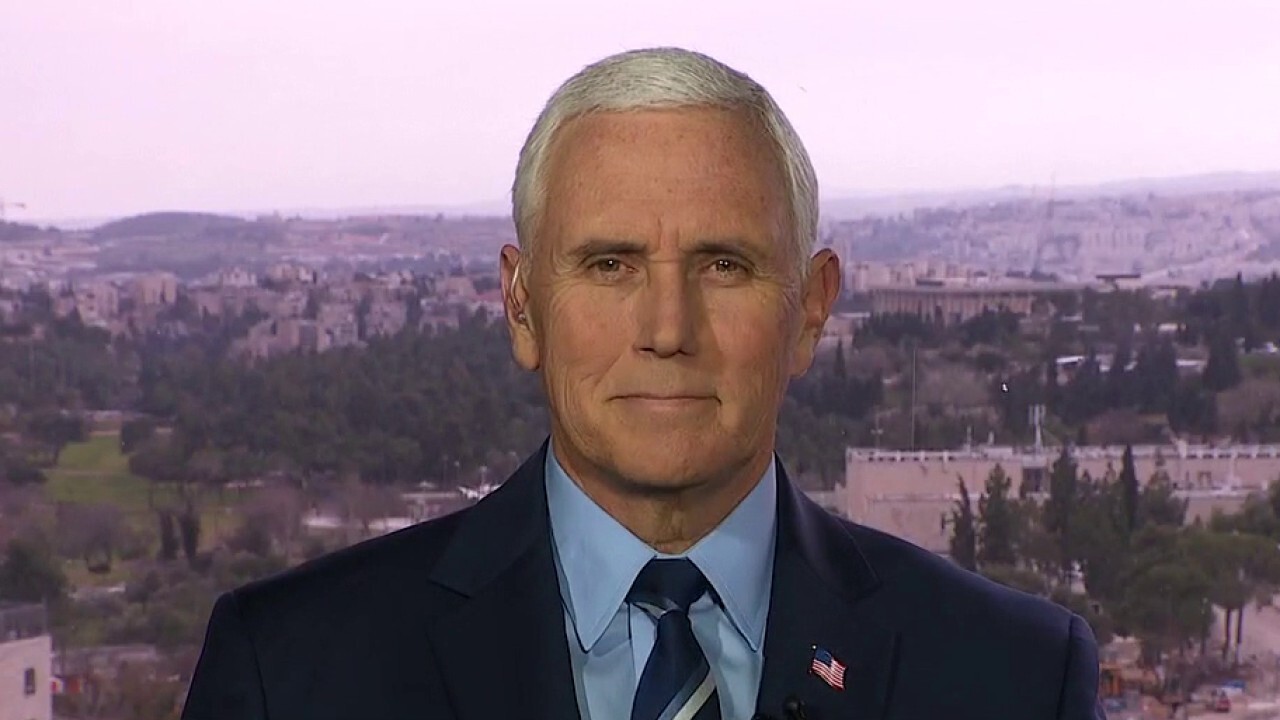 Pence: ‘Sanction all oil and energy exports from Russia’

Former Vice President Mike Pence argues the move is necessary given energy is the ‘lifeblood’ of the country’s economy’ and calls on Congress, the Biden administration and nations around the world to implement an international embargo.

Pence’s organization, Advancing American Freedom, a 501(c) (4) dedicated to advocating for "Conservative values and policy proposals," launched its first ad buy with an ad titled "Horrific Decision." The ad is set to run in a number of media markets in states across the nation.

The ad calls on viewers to call their member of Congress to tell them to "support America’s security instead of Russia’s terror."

Pence's ad buy comes as lawmakers on both sides of the aisle have been pushing legislation to ban oil imports from Russia, and Republicans, especially, have been calling for more domestic oil and gas production in the wake of Russia's ongoing assault on Ukraine.

The most recent data from the U.S. Energy Information Administration shows that in December, the U.S. imported 405,000 barrels per day of crude oil and petroleum products from Russia or almost 5% of all U.S. imports for the month. That's down from about 800,000 barrels in August.

Democrats have called for a federal gas tax holiday as a possible solution for alleviating prices, while Republicans want expanded domestic oil drilling.

Some critics have accused the Biden administration of funding Russian Putin’s war on Ukraine by cutting down domestic oil production and relying on Russian oil. 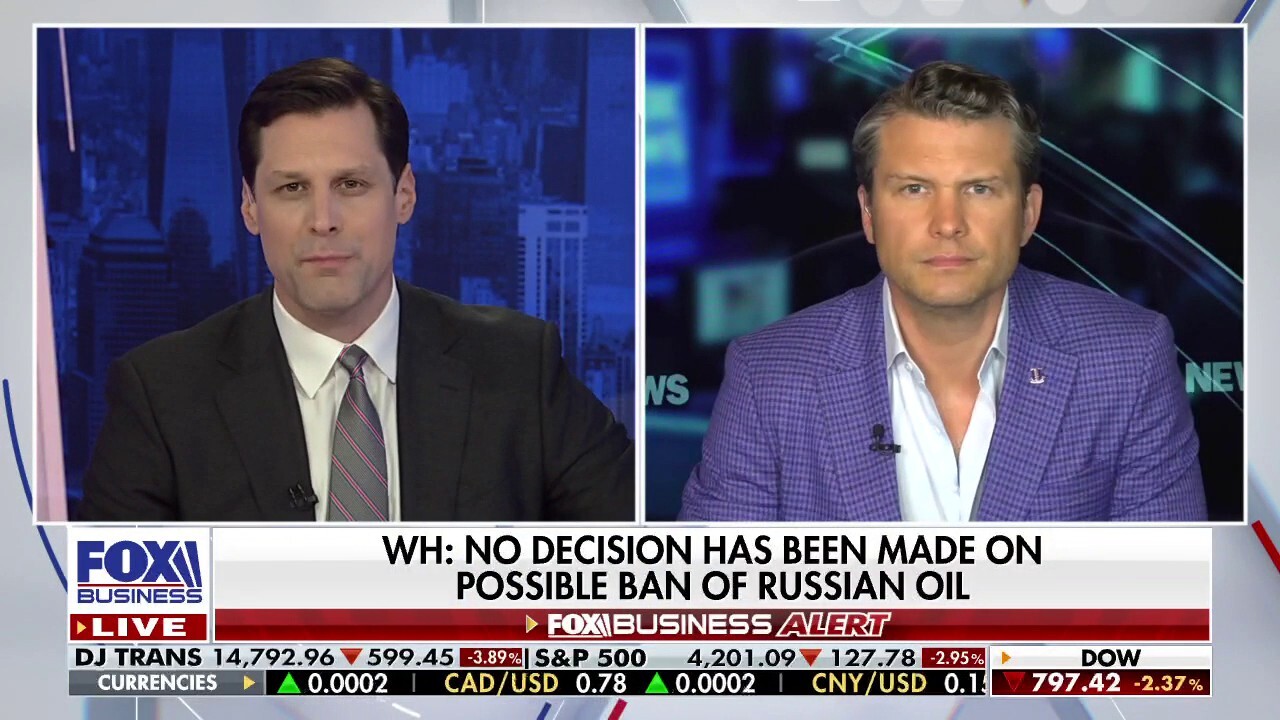 Biden administration has crushed oil and gas from day one: Pete Hegseth

On Tuesday morning, The Associated Press reported, citing a person familiar with the matter, that President Biden has decided to ban Russian oil imports, toughening the toll on Russia’s economy in retaliation for its invasion of Ukraine as energy exports have kept a steady influx of money flowing to Russia despite otherwise severe restrictions on its financial sector.

Biden was set to announce the move as soon as Tuesday, the anonymous source reportedly said. The White House said the president would speak Tuesday morning to announce "actions to continue to hold Russia accountable for its unprovoked and unjustified war on Ukraine."

"In the four years of the Trump-Pence administration, we achieved energy independence for the first time in 70 years," Pence said. "We were a net exporter of energy."

He then pointed to Biden’s moves on energy as soon as he took office, which he pointed out included "killing the Keystone pipeline, taking federal lands off the list for exploration [and] sidelining leases for oil and natural gas."

"Before Ukraine ever happened, we saw rising gasoline prices," Pence said. "So the answer here is number one, stand firm as the United States and have the free world join us in cutting off funds to Russia in their energy exports."

"We need to put those sanctions on, but at the same moment President Biden and this administration must unleash American energy and stop going hat in hand to places like Venezuela," he continued. "I hear that President Biden may be headed to Saudi Arabia to ask them personally to pump more oil and for heaven's sakes, let’s offline any further discussion of the Iran nuclear deal for the sake of Israel’s security and frankly in the recognition that now more than ever we should not be dealing with the Ayatollahs in Tehran or Putin in Moscow in lifting sanctions or pressure that we placed on Iran."

A new nuclear agreement with Iran is expected within days, a European diplomat told Fox News on Friday – coming after weeks of renewed talks in Vienna to revive the 2015 Iran nuclear deal.

The diplomat cautioned, however, that any deal involving Iran, China, Russia, and the U.S. could always unravel. Meanwhile, on Thursday, Iran’s chief negotiator told reporters that a deal would be done within 24-48 hours.

The surge in the price of oil past $130 per barrel on Monday was triggered by the possibility the U.S. might bar crude imports from Russia. Oil prices steadied later in the day and were moderately higher early Tuesday at around the $123 level.

"For heaven’s sake, the time is now for this administration to at least take a time out on their climate change agenda and embrace American strength and American energy," Pence stressed.