Police unions are slamming the Black Lives Matter chapter in Washington, D.C., after the group complained that cops who are shot in the line of duty are automatically treated as “heroes.”

Shortly after a Metropolitan Police Department officer was shot in D.C.’s Petworth neighborhood Sunday night, Black Lives Matter D.C. took the opportunity to promote its #StopMPD campaign and warn against the spread of “copaganda.”

“This is the point we’ve been making for months,” Black Lives Matter D.C. tweeted Sunday night. “Look at the reaction and coverage tonight. Tear jerker press conferences and proclamations of heroes coming soon. Imagine if people knew these folks’ names. Being Black in DC is more dangerous than any job.” 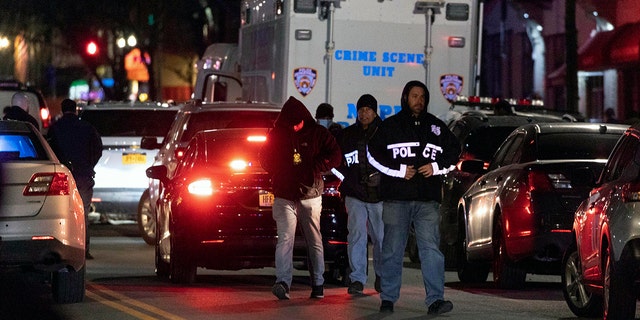 NYPD officers investigate the scene of a shooting in Harlem on Friday, Jan. 21, 2022, in New York. A New York Police Department officer was killed and another gravely injured Friday night after responding to a domestic disturbance call, according to a law enforcement official.
(AP Photo/Yuki Iwamura)

“This isn’t to say these scenarios represent what happened tonight, but it does explain our skepticism, interest in details, and highlights the difference in how people talk and act when an officer is hurt vs when they hurt a Black person. No one asks what the cop did wrong,” the group wrote.

A description of the #StopMPD campaign on the group’s website claims that D.C. is an “occupied police state” that was “never meant to protect” Black people.

“Policing and the system under which police work exists is bound to the enslavement, degradation, and murder of Black people and was never meant to protect us, but instead to exploit our bodies and labor to fill prisons and bolster capitalism,” the page read. “No amount of feel-good videos can deny that truth – no dancing, ice cream peddling, dance videos, BBQ eating COPAGANDA can change that.”

Police are still searching for a suspect accused of opening fire on officers in the street in Petworth, MPD said. One officer, who has not been named, suffered minor injuries from being shot and was treated and released from the hospital, police said.

The shooting comes amid a spate of violence against police officers in metropolitan cities in recent weeks. Earlier Sunday in Houston, Harris County Precinct 5 Corporal Charles Galloway was shot and killed during a traffic stop in what authorities have called an “ambush” attack. That suspect is also still at large. 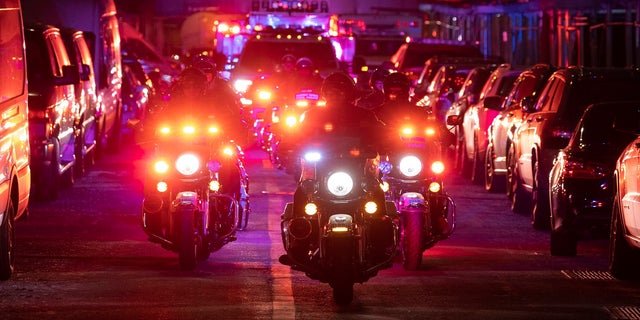 NYPD officers in motorcycles lead an ambulance carrying Officer Wilbert Mora as he is transferred from Harlem Hospital to NYU Langone hospital on Sunday, Jan. 23, 2022 in the Harlem neighborhood of New York.
(AP Photo/Yuki Iwamura)

“It’s nothing new for them,” he said. “As far as I’m concerned, they’re irrelevant. Most people see through their, for lack of a better term, BS. It’s all about money for them. They’ve proven that time and time again they really don’t care about Black lives. If that was the case, they would be out there protesting all shootings, not just those by police. It’s silly to even give them any credit for anything, knowing what their agenda is.”

Also in Houston, Sgt. Ramon Gutierrez of the Harris County Sheriff’s Office was killed in a hit-and-run collision early Monday while working an off-duty job as a motorcycle escort. That suspect was later arrested.

Harris County, Texas, Constable Ted Heap said Monday on “Fox & Friends” he has “never seen” anything like the current challenges to law enforcement after nearly four decades on the force. 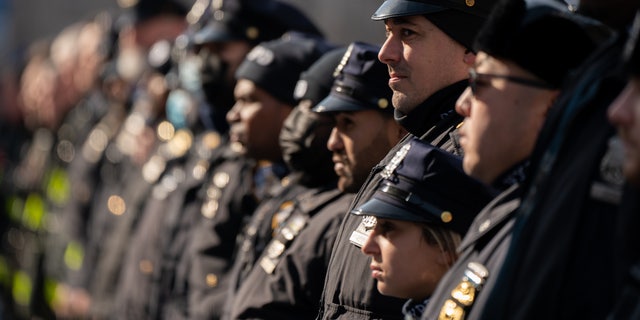 New York City police officers and firemen stand at attention as they await the remains of Police Officer Jason Rivera to be brought to the funeral home on Jan. 23, 2022 in New York City.
(David Dee Delgado/Getty Images)

Critics across the country have pinned the crime wave blame on many liberal district attorneys for what they dub a soft-on-crime approach, but Heap said judges are also to blame.

Patrick Yoes, president of the national Fraternal Order of Police, told Fox News Digital in a statement that the anti-police rhetoric, combined with “rogue prosecutors,” are fueling violence against law enforcement.

“The recent erosion of respect for law enforcement coupled with public figures spewing anti-police rhetoric have fueled more aggression towards police officers than what has been seen in previous years —undoubtedly emboldening violent criminals to commit brazen acts of violence against law enforcement,” Yoes said, in part.

“The attacks on law enforcement are a harsh reminder that our officers are not just in harm’s way due to the dangerous nature of their profession, but that they are the targets of cowardly individuals whose sole motivation is to injure or kill a law enforcement officer,” he continued. “Law-abiding citizens are seeing the real-life consequences of what happens when elected officials embrace pro-criminal, revolving-door policies and make decisions that put the interests of violent offenders ahead of public safety. These decisions — failures to prosecute violent offenders for their crimes or, even worse, releasing repeat offenders arrested for crimes who show a propensity for escalation of violence — make our communities less safe. These rogue prosecutors are putting innocent lives at risk. When there are no consequences for breaking the law, more people will break the law and crime will increase.”

Meanwhile, four New York City police officers have been shot in the past week alone.

“Our criminal justice system is fundamentally broken: Criminals are now targeting law enforcement officers nationwide without fear,” Steve Maritas, organizing director of the United Federation LEOS-PBA, told Fox News Digital. “As more and more law enforcement officers are either being killed, shot or attacked on our streets, the nation will get to know these heroes.”

“Despite the risks, these law enforcement officers continue to put their uniforms and badge on each day to protect you and me, knowing that this could be the last days of their lives. They are truly heroes,” Maritas said.

“BLM is more concerned with promoting extreme anti-police rhetoric than in improving conditions for black Americans,” Johnson said in a statement to Fox News Digital. “Polling consistently shows that blacks bear the greatest burden of violent crime victimization. BLM’s childish tweets ignore the fact that the majority of black Americans appreciate the work of law enforcement and would actually like to see more policing, not less.”

Ret. Sgt. Betsy Brantner Smith, a spokesperson for the National Police Association, a nonpartisan organization, told Fox News Digital in a statement that BLM DC’s tweets are “an unfortunate missed opportunity by the group to work locally to help stop violent crime in and around the metro area.”

“Black Lives Matter DC would be better served to use their platform to help teach young people how to safely engage with law enforcement, how to avoid the lure of street gangs, and how to peacefully resolve conflict,” she said, in part. “The National Police Association is hopeful that community groups like Black Lives Matter DC will begin to recognize that in order to stop the onslaught of violent crime in the Capitol City and beyond, we must work together.”

BLM DC did not immediately respond to Fox News Digital’s request for comment.