Members of Congress have walked alongside protesters and given fiery speeches on the need for police reform since the Memorial Day 2020 death of George Floyd. So far, their efforts have fallen short.

But now with Democrats controlling both the House and Senate, lawmakers are trying to seize the opportunity to get a police reform bill on track to President Joe Biden’s desk for signature.

It’ll be an uphill climb. The House is expected to vote on a major police reform bill later this week that would prohibit racial profiling and create a Justice Department-run national registry on police misconduct.

The measure, formally known as the George Floyd Justice in Policing Act of 2021, would also federally ban chokeholds and require law enforcement officers to use dashboard cameras and body cameras.

This is actually Democratic lawmakers’ second attempt to pass the police reform bill. The House originally passed a similar measure last June, but the GOP-led Senate didn’t budge on allowing a floor vote and the issue died with the end of the 116th Congress.

Prospects for Senate passage of police reform legislation still remains very much uncertain, even with Democrats now in the majority. The 60-vote threshold remains in place to overcome a filibuster, meaning a breakthrough that gains Republican support is the difference in getting anything across the finish line. Informal bipartisan talks are just getting underway.

With the obvious caveats that the Senate can still change everything, Insider asked three legal experts to share what they expect law enforcement in the US would look like should Congress act on a law akin to what the House bill proposes.

There may be some resistance from state and local law enforcement agencies to immediately implement the House bill’s changes, legal experts say.

Tiffany Jeffers, an associate professor of law and legal practice at Georgetown Law, told Insider that many police unions could see some provisions in the House bill as an attack on law enforcement.

One hot-button provision in the measure, for example, overhauls qualified immunity. That doctrine came out of a 1960s-era Supreme Court opinion that protects government employees including law enforcement officers from civil lawsuits unless a police officer knowingly violates “clearly established” rights.

“There seems to be a visceral reaction to any types of reform or monitoring of police officers that relate to racial justice,” Jeffers said. “I think those communities may take these types of legislative pieces as an indictment on the way they do their jobs.”

Some local law enforcement agencies may even choose not to comply with some of the new provisions that include reporting data on when police officers used excessive force while on the job.

In the past, police unions have notoriously stalled any attempts to reform law enforcement. In June, the National Association of Police Organizations wrote a letter to Congress, vocalizing its opposition to the previous version of the House bill. NAPO stated that it was concerned that the bill would essentially eliminate qualified immunity for law enforcement officers and make it easier to prosecute police officers for minor mistakes that they make on the job. 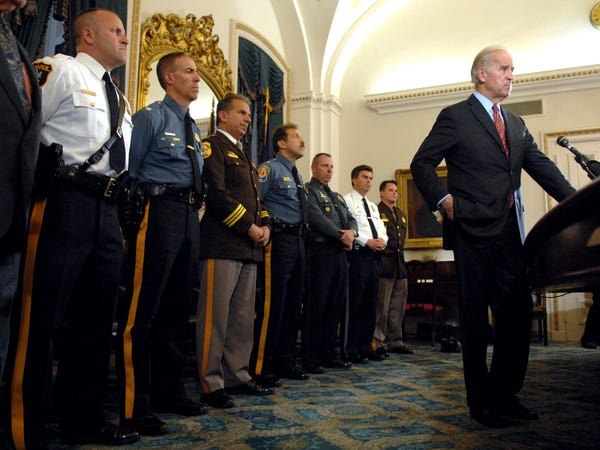 There’s another big reason legal experts have their doubts that all of the reforms in any police reform bill would actually be implemented on the ground: Biden.

The president has a long-standing relationship with police unions and on the 2020 campaign trail he opposed calls from some liberal groups to defund the police.

Biden has stood by his campaign remarks since taking office in January. As president he will now have to walk a careful line between trying to maintain support from police unions while also trying to appease progressive grassroots organizations who are calling for more action.

“To make our communities safer, we must begin by rebuilding trust between law enforcement and the people they are entrusted to serve and protect,” the White House said in a statement Monday, announcing its support of the George Floyd Justice in Policing Act. “We cannot rebuild that trust if we do not hold police officers accountable for abuses of power and tackle systemic misconduct – and systemic racism – in police departments.”

Given Biden’s close ties with police unions, many would look at him to be more of a facilitator toward easing the transition of implementing police reform on the federal level rather than serving as the harsh enforcer, Jeffers said.

Expect some confusion at first

The public shouldn’t expect immediate changes to occur should the House version of police reform legislation pass Congress and make it into law, the legal experts say.

It could take weeks or months for police departments to fully implement these provisions because some of these measures have not been done before on the federal level.

Douglas E. Wood, director of the Aspen Institute’s Criminal Justice Reform Initiative, told Insider that the success of overhauling local law enforcement agencies would depend on the Justice Department. It needs to be given enough resources so it can deliver both guidance and training on how police should implement these new provisions.

“When you pass something on the federal level, it’s important not just to incentivize,” Wood said. “I think it’s also a good thing to provide as much guidance as possible based on what we’ve learned that really works in communities.”

For instance, the House bill would create grants specially for community-based organizations to establish task forces that can work with state and local law enforcement agencies to develop better public safety strategies.

It could be helpful for the Justice Department to give local law enforcement agencies examples of where these kinds of local task forces were implemented and how they were successful, Wood said.

There could be more federal-level policies that are geared to finding community-driven solutions to criminal justice reform that would allow local residents to participate in how to enhance public safety in their communities, Wood said.

The funding would go to “hiring additional police officers and for training on how to undertake a community policing approach,” according to Biden’s campaign website.

But David Carter, a criminal justice professor at Michigan State University and a former police officer in Kansas City, Missouri, said the House bill would not immediately dissolve the deep mistrust between communities of color that have been heavily policed and law enforcement. That can only take time, Carter said.

“There’s an illusion here that if the federal government gives those grants, it will work, and that’s just not the case,” Carter said, referring to the bill establishing community-based task forces to address policing strategies.

“It’s really going to be dependent upon the community,” he added. “Every community is different, so that might garner a different approach.”

The expected tim passage of the House bill does signal to some legal experts that the country is headed in the right direction to overhaul law enforcement.

“It’s a good first step,” Jeffers said. “But there are a lot of additional steps that need to be taken for this legislation to really actually be effective.”