The head of one of New York City’s largest police unions appeared on Fox News twice this week with a “QAnon” coffee mug but claims to have no knowledge of the extremist cult.

Ed Mullins, president of the Sergeants Benevolent Association, was invited on Fox News on Monday and Friday to discuss crime in New York City. During both appearances, Mullins could be seen speaking from the same office where, sitting on what looks like a printer or scanner behind him, is a black coffee mug bearing a giant red-white-and-blue “Q.”

The mug is also inscribed with the word “QAnon,” as well as the letters “WWG1WGA,” an acronym for “Where We Go One, We Go All,” the signature slogan of QAnon, a far-right conspiracy movement. 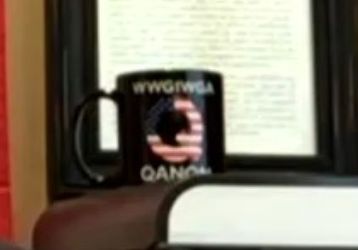 Reached by phone after his Fox News appearance Friday afternoon, Mullins claimed neither the mug nor the office belonged to him. He also claimed to have “no idea” what QAnon was.

Mullins said the office “wasn’t even in New York” but wouldn’t tell HuffPost where it was or to whom it belonged. He also wouldn’t say whether the office belongs to the Sergeants Benevolent Association.

“You see the red-white-and-blue flag behind me?” he said. “Why don’t you talk about that?”

“This is ridiculous,” he added before hanging up.

Mullins is just the latest prominent political figures to have been tied to QAnon, a conspiracy theory that falsely claims — among many other fantastical allegations — that Democratic officials are secretly operating a worldwide pedophilia ring.

And a report from the liberal watchdog group Media Matters found that there are more than 50 Republican candidates for public office who have either “endorsed or given credence” to QAnon. At least 11 of those candidates will appear on ballots in November.

QAnon is, put simply, an ever-mutating cluster of baseless conspiracy theories. Its foundational belief is that a high-ranking government official known only as “Q” has been using cryptic posts on internet message boards to transmit clues about nefarious elites and so-called deep state bad actors who are waging a secret spiritual war against President Donald Trump.

QAnon conspiracy theorists hold on to the authoritarian fantasy that one day soon Trump will use the military to arrest, imprison and possibly execute his political opponents.

The FBI considers the ever-growing QAnon movement — whose adherents have been implicated in multiple crimes — to be a potential domestic terrorism threat.

Media consultant Timothy Burke first spotted the QAnon coffee mug behind Mullins on Fox News on Friday and posted a photo of it to Twitter.