In 2006, longtime congressional staffer Scott Lilly and I wrote an article about unethical  behavior by then-House Speaker Dennis Hastert. No, not his child molestation, which  only became public years later. This was about his outrageous abuse of a congressional earmark, a pot of money designated by a lawmaker for a project in his or her district.

Hastert had bullied through an earmark for a new highway that was supported neither by his constituents outside Chicago, nor by the Illinois Department of Transportation. But the highway was barely a mile from unimproved land owned by Hastert. And soon thereafter, Hastert, the former high school teacher and wrestling coach, parlayed that land into a multi-million dollar windfall.

Hastert’s chicanery, coupled with other abuses by his colleagues, Democrats and Republicans alike, led to a public outcry against those earmarks — often referred to as “pork barrel spending” — and in 2011, the newly installed Republican House majority abolished them as a symbol of reform. While most earmarks were in fact worthwhile projects supported by members of Congress who knew the needs of their districts better than the bureaucrats who would otherwise allocate federal money, the process frequently lacked transparency and the potential for corruption was too great.

Fighting ‘pork’ was a rallying cry

The backlash was strong enough that reforming the process instead of abolishing it was simply a non-starter. And, at the same time, the Tea Party movement meant that Republicans in Congress, who railed against government spending generally, felt that it wouldn’t hurt them with their constituents if they could no longer crow about a new highway interchange or federal building. Being against “pork” was far more potent politics. 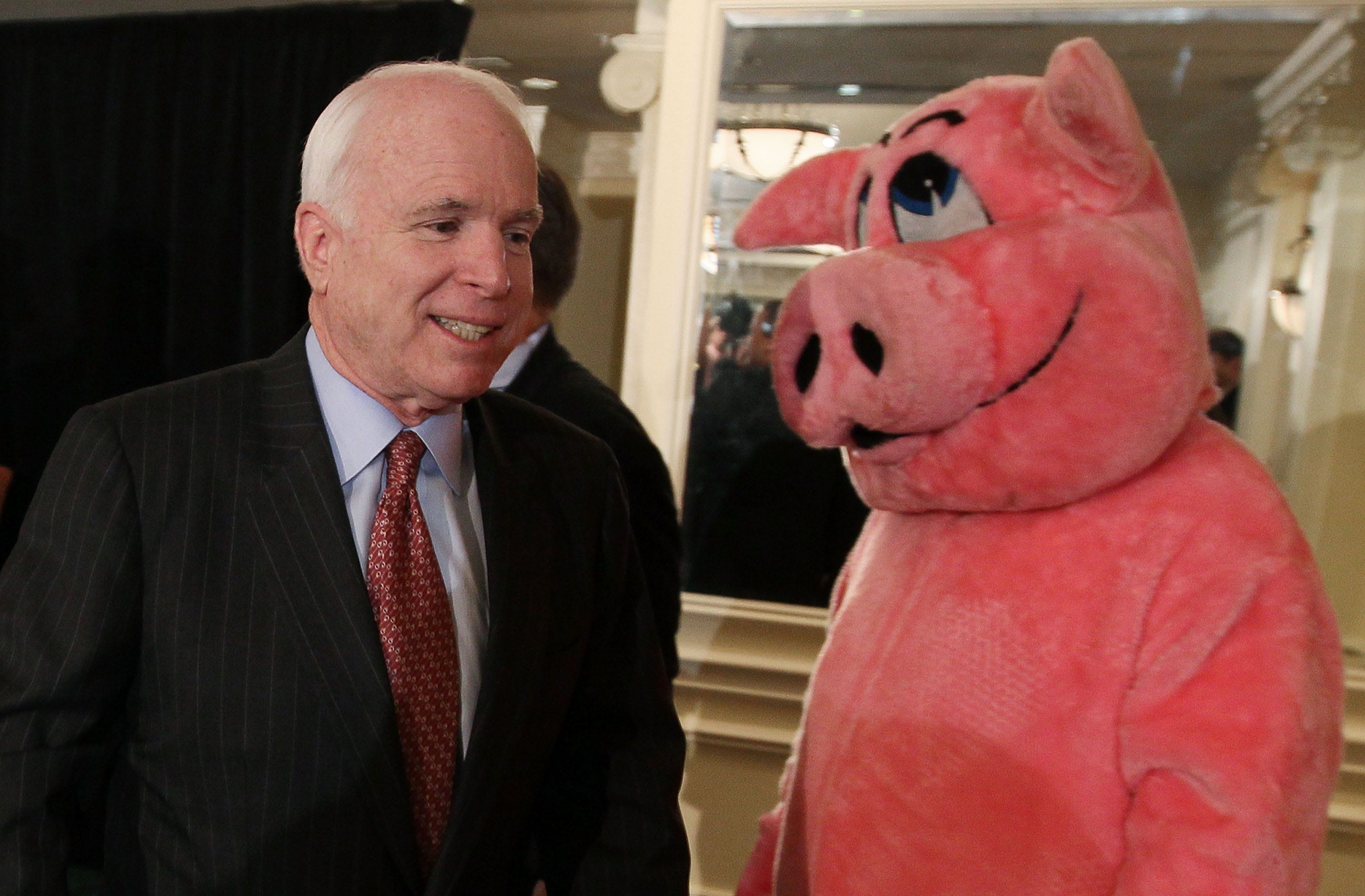 The late Sen. John McCain and someone in a pig costume at a press conference on pork barrel spending on April 14, 2010, in Washington, DC. (Photo: Mark Wilson, Getty Images)

In the decade since the demise of earmarks, spending on highways, bridges, dams, buildings, airports and the like has not dropped like a rock. The spending has gone on, but the decisions about which projects and where have moved from Congress to executive agencies. To most congressional scholars, the loss of earmarks, if a small step away from some corruption, had bigger costs. When lawmakers could claim a piece of the action, and credit for it, they were more inclined to vote for the bills, making for bipartisan coalitions. And earmarks gave leaders more ability to influence their recalcitrant members with either the promise of one or the threat to withhold it.

Welcome back, earmarks: They’re not corrupt; they’re spending as the Constitution envisions.

Now we are close to bringing earmarks back — but in a much better way, including renaming them “community project funding.” But this is not the proverbial equivalent of putting lipstick on a pig. The House Appropriations Committee, under new chair Rosa DeLauro, has proposed a plan that eliminates most of the flaws in the earlier practice and restores appropriately, and with transparency, a role for lawmakers to make decisions about the legitimate needs of their districts.

A rebalancing act that could work

Under the plan, lawmakers must first provide evidence of community support. They cannot do a project that has a for-profit entity getting the federal dollars. The spending on these projects, as recommended by the bipartisan House Committee on the Modernization of Congress, cannot exceed 1% of all discretionary funding, and there is a cap on the number of projects any member can propose. Lawmakers have to certify they have no financial interest in the projects — and for the first time, they have to certify the same for their immediate families.

For genuine transparency, every request by a lawmaker for a project has to be posted on line as they submit the requests to the relevant committee — and have to justify it by describing the project and its purpose. And all requests will be posted on the same website, for additional transparency. When projects are going to be funded by the appropriations panel, they will have detailed descriptions for reporters and the public to examine.

Of course, when big bucks are involved, there is no way to ensure that everything will be on the up-and-up. The most corrupt lawmaker in recent history, Randy “Duke” Cunningham of Top Gun fame, had a menu of potential bribes, with bigger dollars for bigger giveaways. But most of his corruption involved steering defense and intelligence contracts, not Hastert-style earmarks. This step by House Appropriations is rebalancing the needs of Congress, its members and their constituents by genuinely reforming a practice that at its best is salutary. It is a very good sign.

Norman Ornstein, an emeritus scholar at the American Enterprise Institute, is co-author of “One Nation After Trump” and “It’s Even Worse Than It Looks: How the American Constitutional System Collided with the New Politics of Extremism.” Follow him on Twitter: @normornstein