The New York City mayor’s race has been a nightmare for left-leaning voters.

The campaigns of city Comptroller Scott Stringer and former nonprofit executive Dianne Morales ― respectively, the most seasoned and most ideologically pure progressive candidates ― have lost steam in varied but embarrassing ways, depriving the left of two its favored contenders.

Of course, no one can predict how ranked-choice voting, which allows voters to list their top five picks, will complicate the outcome.

There’s still a chance that either former sanitation commissioner Kathryn Garcia ― a moderate tolerated by the left ― or Maya Wiley, a former counselor to Mayor Bill de Blasio ― a progressive behind whom the left is coalescing at the last minute ― will prevail in the June 22 Democratic primary.

The most likely scenario, though, remains a showdown between the two moderate lightning rods who have dominated the polls for months ― former presidential candidate Andrew Yang and Brooklyn Borough President Eric Adams.

Officially, progressive organizations eager not to prematurely give up on a Wiley upset have written off side-by-side assessments of Adams and Yang as a false choice ― or worse, a self-fulfilling prophecy.

Instead, groups like Our City PAC are instructing progressive voters to omit both men from their ranked-choice ballot.

“Neither Yang nor Adams should get any support from anyone who shares our values,” said Gabe Tobias, a former campaign staffer for Rep. Alexandria Ocasio-Cortez (D-N.Y.), who is running Our City PAC. “Both of them present really clear dangers to what we want to achieve in the city.”

But given the criticism that Wiley elicited from civil rights advocates during her tenure atop the New York Police Department’s Civilian Complaint Review Board, even her victory would be bittersweet for progressive stalwarts and socialists.

“The potential for real, transformational change is very limited, no matter who wins,” said Matt Thomas, a Sunnyside, Queens, resident active in the New York City chapter of the Democratic Socialists of America.

Privately, many progressive New York City voters have accepted the likelihood that either Yang, a former test prep entrepreneur who has never voted in a city election, or Adams, a former NYPD captain who was a registered Republican in the late 1990s, is going to be the next mayor.

With no guidance from progressive institutions like the Working Families Party, these voters are now deliberating over whether Yang or Adams is less objectionable, and thus which one is the lesser evil to rank fourth or fifth on their ballots, rather than omit altogether.

“Progressives are asking which brand of rope they want to be hanged with,” said Sean McElwee, a Harlem resident and co-founder of the think tank Data for Progress, who has not decided whom he prefers between Yang and Adams. 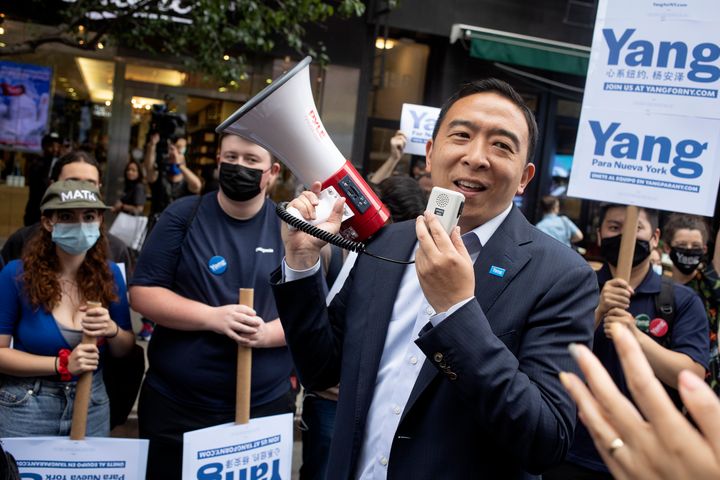 The Beast You Know Vs. A Fresh Start

Asked about what makes Yang more progressive than Adams, Yang’s campaign emphasized his plans to provide $2,000 in cash relief to the 500,000 poorest New Yorkers, create a “people’s bank” for unbanked New Yorkers, and decriminalize sex work. They also highlighted Yang’s support for a state-level, single-payer health care bill over which he would have no direct say as mayor.

Sasha Ahuja, a social worker and former head of the city’s equal employment commission, told HuffPost that she took the job as co-manager of Yang’s campaign precisely because she was disappointed in de Blasio’s failure to live up to his progressive potential as mayor.

“In this moment, New York really needs a champion, really needs a big thinker who is going to move big ideas forward and is not going to say, ‘Oh, I can’t, because of such-and-such,’” Ahuja said.

Both Yang and Adams are cozy with real estate developers and have benefited from the support of super PACs funded by a handful of conservative-leaning, super-rich individuals eager to elect a business-friendly mayor.

And both men are relatively supportive of traditional policing. They decry calls to reduce police funding, want more cops in subways stations, and want to reconstitute the NYPD’s controversial plainclothes anti-crime unit.

But there are subtle differences. While Adams declined to state how many affordable housing units a year he would commit to creating as mayor, Yang has promised to create 30,000 new units annually.

On the other hand, unlike Yang, Adams supports a modest, temporary increase in income taxes for city residents earning more than $5 million a year, and has come out in support of repealing NYPD officers’ “qualified immunity” from civil lawsuits. A survivor of police brutality and a voice against racism within police ranks during his 22 years on the force, Adams has said he wants to make it easier to sue individual cops for misconduct, while making sure “we do not go after officers who are carrying out lawful actions.”

Adams also has his own version of “cash assistance”: He wants to match 60% of the federal earned income tax credit for families making $50,000 a year or less.

“Eric Adams is one of the most progressive candidates in the race,” Adams campaign spokeswoman Madia Coleman said in a statement. “Eric has been fighting for civil rights, racial justice, and police reform for decades — issues which many candidates seem to have just been introduced to.”

More often though, the debate about the two candidates is less about policy than about their personal affect, background, and respective political coalitions.

As Yang is fond of noting, Adams has been the subject of corruption investigations by federal, state and local governments. And while none resulted in an indictment, there is plenty of evidence suggesting that he has used his career in elected office since 2006 ― first as a state senator, and now as borough president ― to fatten the profits of donors and friends, before recycling their money back into his campaign or an adjacent nonprofit not subject to campaign contribution limits.

And unlike Yang, who claims to have voted for Cynthia Nixon over New York Gov. Andrew Cuomo in the 2018 Democratic primary, Adams has fought in the trenches against the city’s nascent progressive community. In 2018, he backed then-state Sen. Jesse Hamilton, a member of the rogue Independent Democratic Conference that helped keep the state Senate in Republican hands, against his successful challenger, current central Brooklyn state Sen. Zellnor Myrie. 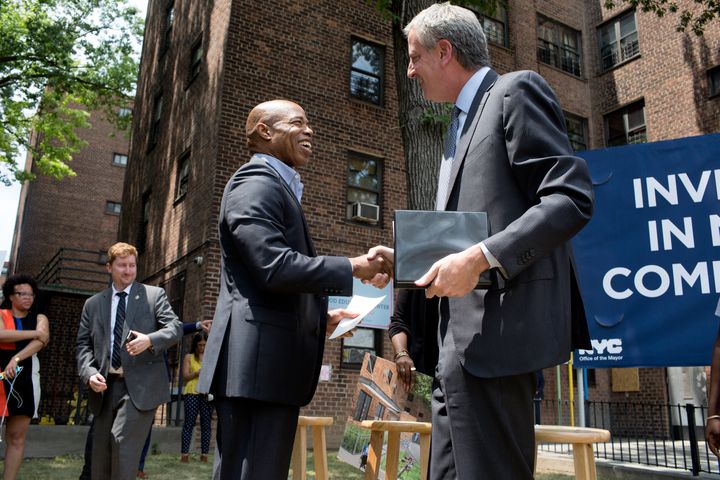 A ‘Blue-Collar Mayor’ With Ties To Big Money

Even assuming that Adams is more of an old-school horse trader, to some progressives, the prospect of a classic, machine politician is less frightening than the unknowns posed by a Yang mayoralty.

It even reminds these liberals of de Blasio, an ethically challenged mayor whose clumsy brand of progressivism is getting a second look as primary day approaches. De Blasio, who has not endorsed anyone in the race, is reportedly campaigning for Adams behind the scenes.

“De Blasio’s the best damn mayor we’ve ever had and if he likes Adams, I take that seriously,” said McElwee, before noting that he is still unsure whether Adams is more palatable than Yang.

Major labor unions representing hundreds of thousands of workers are a pillar of Adams’ “establishment” support, indicating that while real estate developers and other wealthy interests would have a seat at Adams’ table, workers would too. It’s part of why Adams is so insistent that he would be a “blue-collar mayor.” (Yang is endorsed by two smaller unions, compared with more than a dozen backing Adams.)

“Eric was a blue-collar worker,” said Kyle Bragg, president of SEIU 32BJ, which has endorsed Adams and represents 85,000 janitors, security guards and other property workers in New York City. “Anyone trying to say a police officer is not a blue-collar worker, well, then I don’t know. They’re as blue-collar as anyone else.”

Notwithstanding Adams’ relationships with real-estate tycoons, Adams has had 32BJ’s back during difficult contract fights, according to Bragg.

“Eric’s not an unknown entity to us,” he said. “He’s been a friend to working people.”

“While both candidates are receiving support from objectionable interests, Adams’s base is working class New Yorkers and low income communities,” Bryer said. “On crime — where Adams and progressives are most at odds — perhaps some introspection is in order on the part of progressives in how they think about crime, how New Yorkers who live in neighborhoods with the highest crime rates feel, and basing their political judgements and policy solutions on that.”

Bryer is one of many progressives concerned about Yang’s ties to Bradley Tusk, a venture capitalist, political consultant and former consigliere to then-Mayor Mike Bloomberg. Tusk, a centrist power broker, has blurred the lines between business and politics by, for example, lobbying against government regulations for Uber and benefiting personally as an Uber equity holder.

While Tusk is not officially affiliated with the campaign and Yang has insisted on his independence, Yang’s co-campaign managers — Ahuja and Chris Coffey — as well as many other top staffers hail from Tusk’s firm. Tusk’s comment to a New York Times columnist that Yang is an “empty vessel” only added to fears that Yang is a Trojan horse for the same “special interests” he rails against on the stump ― especially the disruptive machinations of Big Tech. 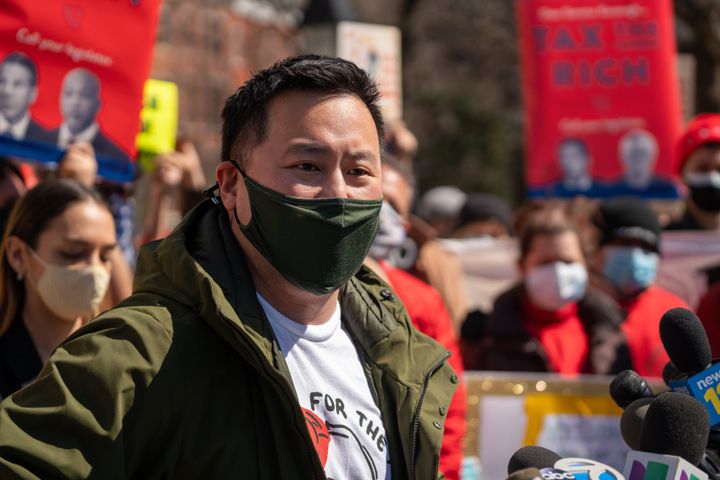 An ‘Empty Vessel’ Or An Open Mind?

Yang’s boosters have implicitly tried to co-opt the characterization of him as a blank slate, arguing that Yang possesses a unique openness to new ideas, including progressive ones.

If Yang is indeed an “empty vessel,” they suggest, progressives should seize the chance to fill that vessel on their terms.

Kim believes that he already has had success in this regard. He secured Yang’s support for a pledge to back hundreds of older Asian American home health aides locked in a legal fight with a nonprofit health care provider over wages for 24-hour shifts that the workers say were stolen from them.

By contrast, many of his colleagues in city and state politics with more progressive reputations than Yang have fallen short in that fight, Kim noted.

“Just because you have the progressive label doesn’t mean you’re doing everything you can to stand by worker rights,” Kim said. “Whereas Andrew, because of his independence and his detachment from any established order, he can make the right call that this is wrong.”

Ahuja envisions Yang combining some of liberal mayors’ compassion with more efficient management of the city government ― a prerequisite, Ahuja and others maintain, for more lasting, transformative change than de Blasio was able to achieve.

“It’s hard to navigate a big, complex bureaucracy, but also have a champion at the very top who’s going to say, ‘We’re going to get it done,’” Ahuja said. “The freedom and the liberty that Andrew has to govern and do the right thing for everyday people ― that is a breath of fresh air.”