Russian President Vladimir Putin pushed back against claims that his government is behind cyberattacks against the U.S. or election interference efforts, claiming that the allegations against Russia are “farcical” and lack evidentiary support.

In an interview with NBC News, Putin stopped short of a full denial of the allegations, but insisted that the U.S. has not been able to prove anything.

“It’s becoming farcical,” Putin said. “We have been accused of all kinds of things. Election interference, cyberattacks, and so on and so forth, and not once – not once, not one time – did they bother to produce any kind of evidence or proof. Just unfounded accusations.”

In 2019, the Senate Intelligence Committee released an 85-page report outlining a large-scale Russian effort to interfere in the 2016 presidential election. The group of bipartisan senators described the social media activities of the Internet Research Agency as part of a “broader, sophisticated and ongoing information warfare campaign designed to sow discord in American politics and society.”

In the months before the 2020 elections, FBI Director Christopher Wray said Russia had been “very active” in election interference efforts, and a report by cybersecurity firm Digital Shadows released prior to the 2020 election claimed that Russia, Iran and China all posed threats leading into November’s contest. The report accused Russia of “hack and leak” operations and cooperation between organized crime groups and Russian government agencies. 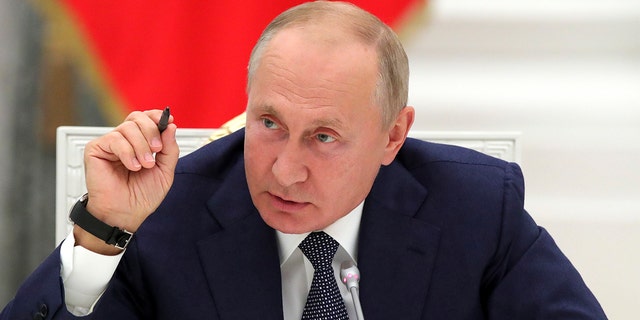 Putin was asked by NBC why he does not take a firmer position against individual hackers who attack the U.S.,  harming diplomatic efforts in the process. Putin responded by saying that “the simplest thing to do would be for us to sit down calmly and agree on joint work in cyberspace,” claiming that the U.S. has refused to do so.