Florida Republican Congressman Byron Donalds called out critical race theorists on Thursday, declaring that the left-wing ideology that alleges America as a nation is grounded in racism, has no place in educational institutions, adding that it is a fabrication of activists on the far-left of the Democratic Party.

On “Fox News Primetime,” host Will Cain noted that critical race theory by definition does not allow for dissent because its proponents believe only they know the true history of the United States.

Donalds, who is Black, replied that if such activists want to have a “symposium” about the purportedly Marxist theory, they should start by focusing on institutions frequented by liberal Democrats that don’t meet their own criteria.

“I think if they want to do critical race theory, they should hold the next symposium at Sheldon Whitehouse’s beach resort he has there in his state,” the Naples lawmaker remarked.

“The fact of the matter is very, very simple. We cannot have a divisive ideology being permeated in our schools. What the theorists want to talk about in academia being distilled down to oppressor-oppressed models that are affecting people in our schools and members of our military. It has no place there,” Donalds, 42, added. 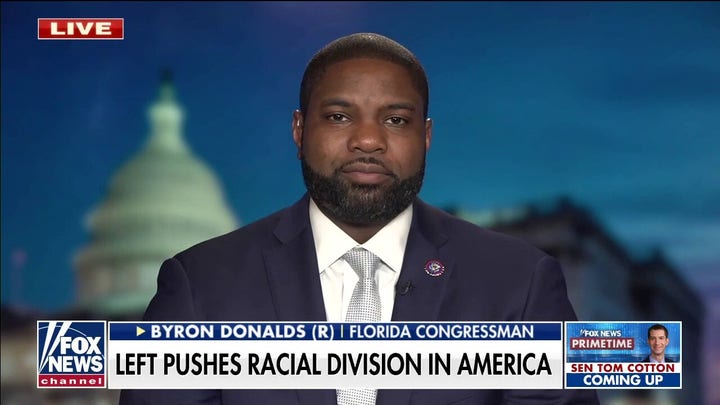 Earlier this week, Whitehouse, 65, was confronted by a reporter outside a beach club that he has frequented for years, and was asked about the fact it has few if any members of color. On Wednesday, Whitehouse issued a statement saying he is not a formal member of Bailey’s Beach Club in Newport, R.I., but is in fact a member of a separate yacht club in the Ocean State that “lack[s] diversity.”

“Failing to address the sailing club’s lack of diversity is squarely on me, and something for which I am sorry.  I commit to working with the club and the community to build a more inclusive membership and to better connect with the local community,” Whitehouse told Fox News.

Bailey’s, also known as the Spouting Rock Beach Association, told the Providence Journal earlier this week that the characterizations of its membership are “inaccurate” and that it has had and welcomes any members without regard to race, religion or background.

On “Fox News Primetime,” Donalds further expounded on his opposition to critical race theory curriculum, calling it a “creat[ion] on the left–wing of our political–ideological spectrum in the United States.”

“It views everything through the lens of race. So that subjectivity cannot permeate our educational institution and our military institutions. If you want to have these ideas, have them, that’s fine. But if you want to talk about history, history is objective.”

Donalds hearkened back through history where autocrats imposed their ideology on their people, with unfortunate results:

“The only other world experience we have seen is despotism by a small group of people who believed that their ideas are better than everybody else’s. Unfortunately that’s what some of the critical race theorists like to say; their viewpoint is the viewpoint,” he said. “Unfortunately for people to disagree [they said] you need to get reeducated and come back for more training.”

“That’s not what we do in America. Live your life. View history. Learn our history. But, be tolerant of one another and let’s move forward together as people.”