For the second time this summer, Republicans prevented the U.S. Senate from opening debate on the For the People Act, a sweeping package of voting rights, campaign finance, redistricting and ethics reforms. Republicans also blocked two bills featuring provisions of the larger package: a limited ability for states to engage in partisan gerrymandering and a broader disclosure of dark money.

“Republicans have formed a wall, a total wall of opposition against progress on voting rights in the United States Senate,” Schumer said. “Even on an issue as sacred as the right to vote, Senate Republicans refuse to allow even a debate.”

The move by Schumer to bring the bills up again after days of debate over President Joe Biden’s infrastructure plans signals that the Democrats’ effort to pass voting rights legislation to counter the wave of voter suppression bills pushed by Republican state legislatures is not over. It is, in fact, entering its final stage.

“Voting rights will be the first matter of legislative business when the Senate returns to session in September,” Schumer said.

The For the People Act was introduced as the first bill in both the House (H.R. 1) and the Senate (S. 1), marking it as Democrats’ congressional priority. The bill contains voting rights provisions drawn up by the late civil rights icon, Rep. John Lewis (D-Ga.) that sought to remove obstacles to the ballot box by mandating that states provide early voting, “no excuse” absentee voting, same-day voter registration and automatic voter registration, among other things. The bill also includes a ban on partisan gerrymandering in House redistricting, the disclosure of dark money in elections, a system of publicly financed congressional elections and new ethics limits on the executive branch.

It passed the House on a near party-line vote, with one Democrat voting no in May. Senate Republicans blocked it with a filibuster in a 50-50 vote in June.

With Republicans universally opposed to the voting rights bill, the real drama has taken place within the Democratic Party caucus. 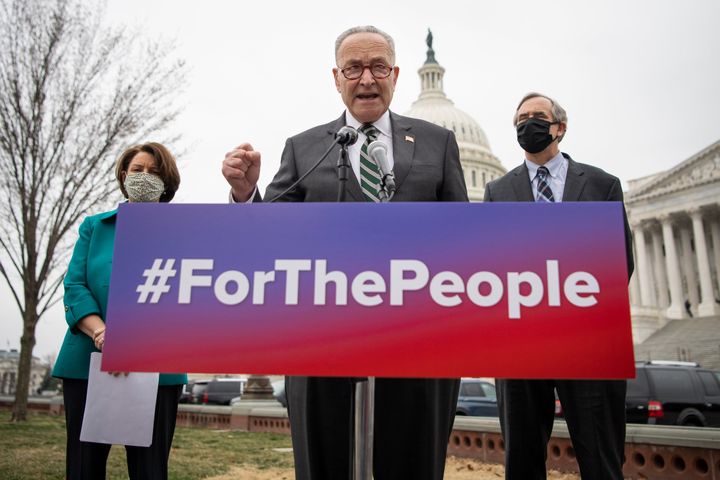 Sen. Joe Manchin (D-W.Va.) announced his opposition to the bill in May over the bill’s failure to secure Republican support. He eventually released a list of proposals in June that could form the basis of a compromise bill to win his vote. He then joined the rest of the party caucus to vote to open debate on the bill with the intention that the existing bill would be replaced by the slimmed-down version offered by Manchin as a substitute amendment.

Since then, Manchin has been working with members of the Democratic caucus, including lead co-sponsors Sens. Amy Klobuchar (Minn.) and Jeff Merkley (Ore.), freshman Sens. Raphael Warnock (Ga.) and Alex Padilla (Calif.) and Sens. Jon Tester (Mt.), Angus King (I-Maine) and Tim Kaine (Va.), to craft his diluted version. While the text of the Manchin compromise has not yet been released publicly, it is expected to include some new provisions to counter laws passed by statehouse Republicans that make it easier to alter election results after the fact or purge election officials for partisan reasons.

Manchin noted on the Senate floor early Wednesday morning that his vote to discharge the For The People Act was not for that bill, but for consideration of his compromise bill.

“I am again voting to move that process forward because I believe that we need to come together to restore people’s faith in the integrity of our elections. But I do make it very clear that I will not support the For The People Act,” Manchin said.

Manchin and Sen. Kyrsten Sinema (D-Ariz.) remain the only two members of the Senate Democratic Caucus to vocally oppose changing the filibuster rules. Biden has also carefully refused to endorse changing the Senate’s filibuster rules. The president notably did not mention filibuster changes in a major speech on voting rights on July 13, when he called the ongoing GOP attack on voting rights and the legitimacy of elections “the most significant test of our democracy since the Civil War.”

Manchin has said he can bring Republicans on board to support his compromise bill when he releases it. Biden also said that he would be asking his “Republican friends in Congress” to “help prevent this concerted effort to undermine our election and the sacred right to vote.”

“A majority of the Senate and the majority of the American people support strong voting rights legislation that protects our democracy ― all that stands in the way is the outdated and abused filibuster,” Eli Zupnick, a spokesperson for Fix Our Senate, a filibuster reform coalition, said in a statement. “If the Senate leaves town without addressing voting rights and imminent partisan gerrymandering, then senators and President Biden will need to explain why they protected the filibuster over our democracy, and how they will deal with the filibuster and pass key reforms when they come back.”

Calls to end the filibuster in order to pass the For the People Act have escalated in recent weeks. Activists and more than 100 state lawmakers who are facing down the threat of GOP bills aimed at subverting elections and suppressing voters came to Washington to lobby their senators to pass the For the People Act. They called on the Senate to call off its August recess to pass on the bill.

The For the People Act was always headed for a showdown with the filibuster. Wednesday’s early morning move by Schumer showed that he intends to keep pushing for the bill. The coming months will show whether Democrats will do what both parties have done every time they’ve won full control of Congress and the White House over the past 20 years, which is pass their priority legislation, or if they’ll let the filibuster bring it down.