Boral chairman Ryan Stokes has said he is comfortable with incoming chief executive Vik Bansal’s operating style despite the former Cleanaway boss leaving his old job under a cloud of bullying allegations and claims he presided over a toxic workplace culture.

Stokes pinned hopes of turning around the concrete and asphalt giant’s $45 million profit loss on Bansal, who will become the CEO in December. 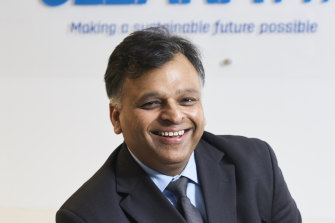 Former Cleanaway chief executive Vik Bansal was the focus of at least four whistleblower complaints that alleged he created a culture of bullying and harassment.

He acknowledged on Wednesday Bansal’s controversial exit from Cleanaway, and an internal review that concluded Bansal was “overly assertive”, but said he was the “right leader for the next stage of Boral’s journey”.

“I think it’s worth acknowledging that you’re unable to achieve the success achieved in Cleanaway without a strong performance culture,” Stokes said. “While there were some issues and even Vik will be open in saying the things he’d do differently today. Fundamentally, I wouldn’t suggest that those issues were widespread within that Cleanaway business.”

The shares of Cleanaway, a waste management company that provides garbage disposal for about 100 local councils, rose 300 per cent under Bansal’s tenure from August 2015 to June 2021.

In 2020 an investigation by The Australian Financial Review exposed multiple allegations of workplace bullying by Bansal at Cleanaway’s St Kilda office in Melbourne.

Bansal left Cleanaway in 2021 after reaching a “mutual agreement” with the company and was rewarded a $1.5 million separation payment. He has since been the CEO of steel manufacturer InfraBuild.

Stokes said he was satisfied that Bansal had learned from his experience at Cleanaway.

“Our view is that leaders evolve and grow through experiences. I think Vik has certainly acknowledged that, I think his capability in leading large organisations in the industrial space is really well suited to what Boral is going to require.”

Stokes said during discussions that Bansal “certainly conveyed a very clear viewpoint about how he would drive performance improvement and we felt very comfortable in his operating style”.

The Stokes family’s Seven Group took over Boral last year and worked to sell off $4 billion in US assets to return Boral to an “operation very much focused on Australia” under outgoing CEO Zlatko Todorcevski.

“Zlatko successfully delivered on that but probably the next three to five years weren’t really his focus and to drive the next stage, so it was the right point in time to look at a transition,” Stokes said.

He said energy prices were the biggest pressure on Boral, alongside spikes in production and supply chain costs, and did not think the energy crunch would be fixed anytime soon. He said Beach Energy, another Seven Group holding, controls 15 per cent of the east coast’s gas supply.

Boral’s share price lifted 13.6 per cent to $3.28 on Wednesday following the news of Bansal’s appointment.