Federal Aviation Administration officials have approached U.S. prosecutors to warn them that the lone person charged with a crime after the two fatal crashes of Boeing’s 737 MAX is being made a “scapegoat,” according to a court filing in the case.

Statements by the US Department of Justice after it indicted Mark Forkner, Boeing’s former chief technical pilot, last October contained “many errors in fact,” according to an email and a presentation given to prosecutors by the FAA employees. The case’s focus on Forkner’s actions in the wake of the crashes is “incorrect and misguided,” the FAA officials said. 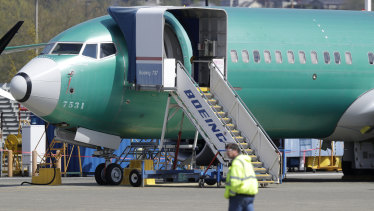 The 737 MAX, once Boeing’s best-selling aircraft, was grounded for 20 months after two crashes killed 346 people.Credit:AP

The unusual assertions by FAA officials, which could substantially undercut the prosecution’s case, were detailed in a motion by Forkner’s lawyers filed on Monday in a Texas court asking a judge to order access to the officials as potential witnesses in the case.

One unnamed FAA official approached prosecutors on October 26, 12 days after Forkner was indicted, to request a meeting, said the motion by Forkner lawyers Jeff Kearney, Catherine Stanley and David Gerger.

“Forkner, he said, is a ‘scapegoat’ and should ‘not be charged,’” the lawyers said in the motion.

In a PowerPoint presentation by FAA officials, with the agency’s logo prominently attached to each page, they say alleged “smoking gun” evidence isn’t relevant to the case, and Forkner’s role in developing pilot-training for the MAX played no role in the FAA’s decision to certify the plane or the design errors that led to the crashes.

The information throws new uncertainty into the Forkner case and the narrative of the 737 MAX saga, which prompted a 20-month grounding of Boeing’s best-selling aircraft and led to billions in losses for the planemaker. It also comprises some of the most detailed explanations about what US regulators believe went wrong in the 737 MAX’s approval.

Crashes off the coast of Indonesia and in Ethiopia within about four months in 2018 and 2019, which killed 346 people, were triggered in part by failures that caused the jets to automatically nosedive repeatedly. In both cases, pilots didn’t perform a procedure that would have disabled the errant system, and they eventually lost control of the planes.

Boeing engineers didn’t fully explain the system to the FAA after making changes that made it more powerful, according to several investigations. The company agreed to a $US2.5 billion settlement ($3.5 billion) to resolve criminal charges and acknowledged defrauding the government in January 2021, but so far Forkner is the only person to face criminal charges.

Forkner became a poster boy for Boeing’s failures when a trove of his caustic and sarcastic text messages were released. He bragged about using “Jedi mind tricks” to persuade regulators and told a colleague he had unknowingly misled the FAA.

However, the FAA officials who approached prosecutors said his role to develop pilot-training materials and persuade the FAA and other regulators around the world to approve them weren’t relevant to the plane’s design faults and the accidents.

Then, on about November 16, the official, who apparently was helped by others at FAA, sent the PowerPoint presentation to prosecutors, the lawyers wrote. None of the officials were identified in the motion.

It said that there was a “false narrative” in the wake of the accidents that focused on whether pilots had been properly trained on the system linked to the crashes. It had been Forkner’s responsibility to gain approval for the training.

A spokeswoman for the US Attorney’s Office in the Northern District of Texas, where the charges against Forkner were filed, didn’t immediately respond to requests for comment.

The case is US v Forkner, 21cr268, US District Court for the Northern District of Texas (Fort Worth).