The videos caused a stir inside The Times due, in part, to the inappropriate comments Rosenberg made about his fellow reporters. But, according to people familiar with the matter, it was seen by many journalists at The Times as part of a broader harassment and intimidation campaign Project Veritas has waged against the newspaper for reporting extensively on the inner-workings of the group.
The right-wing group, headed by conservative activist James O’Keefe, has over the past year targeted three reporters in particular: Adam Goldman, Mark Mazzetti, and Michael Schmidt.

Those three reporters, all Pulitzer Prize winners themselves, stand out because they are the journalists at The Times who have authored a series of exposés revealing how Project Veritas employs spy tactics and relies on ethically dubious reporting strategies to target perceived liberals.

That story was followed by a series of others about the group, including one in which they reported that Project Veritas had executed so-called “honey pot” operations, a tactic that involves using an undercover agent who pretends to be romantically interested in someone, then exploits that relationship to extract information from them.
In a November story, Goldman and Mazzetti, sourcing in part from internal Project Veritas legal memos the paper’s journalists obtained, reported that the group has worked “with lawyers to gauge how far its deceptive reporting practices could go before running afoul of federal laws.”
And Schmidt has separately authored stories with Goldman on how federal authorities who are investigating the theft of a diary belonging to President Joe Biden’s daughter have executed search warrants targeting locations associated with Project Veritas.
The stories have evidently gotten under the skin of O’Keefe and his organization.
Project Veritas sued The Times in late 2020 for defamation over an article written by a different reporter, a case that the newspaper has fought in court. Then late last year, after the publication of Goldman and Mazzetti’s November story, the right-wing group asked the court to stop the paper from publishing memos prepared by Project Veritas lawyers, arguing that the newspaper had violated Veritas’ attorney-client privilege by publishing such material.
The latest dispute has raised significant First Amendment concerns and is being closely watched by press advocates because a New York state judge had initially ordered The Times to cease publishing stories based on the Project Veritas documents it had obtained. An appeals court later stayed the order. The case remains ongoing in court.
But while Project Veritas has been attempting to muzzle The Times through the judicial system, it has also executed what amounts to a public harassment campaign against Goldman, Mazzetti, and Schmidt.
O’Keefe has even publicly signaled that he has trained his sights on the reporters, mocking them all in an on-screen graphic featured in a recent Project Veritas video that dubbed the journalists “The NYT Hardy Boys.”
When O’Keefe publicly targets a journalist, it often — if not always -— prompts a flood of harassment against the reporter. The volume of harassment has the potential to discourage reporting about O’Keefe and Project Veritas, though it has failed to deter The Times reporters.
People familiar with the matter told CNN that The Times reporters have continued to report on Project Veritas in the face of, as one of the sources described it, a “barrage” of “constant” harassment. But the Project Veritas campaign has resulted in heightened vigilance among prominent Washington reporters, the people said.
That is, in part, because Goldman, Mazzetti, and Schmidt have all been prominently featured in videos that Project Veritas has released.
In the latest video, released Thursday, O’Keefe confronted Mazzetti at a coffee shop where the journalist was working. O’Keefe proceeded to make a video in which he sat directly next to Mazzetti and made disparaging comments about him, Goldman, and The Times.
Throughout the confrontation, Mazzetti attempted to ignore O’Keefe and continue working. Mazzetti eventually left the coffee shop, but O’Keefe followed him with a film crew and continued to pester him. Mazzetti remained silent, making it clear that he was not going to engage, but O’Keefe badgered him with a series of leading questions anyway. 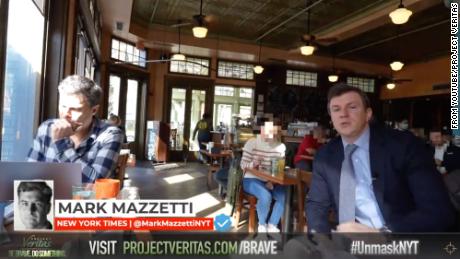 In February, Project Veritas published a video in which Schmidt attempted to recruit as a source a person associated with Project Veritas. The video didn’t capture Schmidt saying anything inappropriate. In fact, it showed Schmidt level with the person with whom he was speaking, telling him that his “only goal” was to report an accurate story. Nevertheless, O’Keefe used it as an opportunity to mock both Schmidt and Goldman.
In a video released last March, O’Keefe boasted that The Times had issued a correction when Mazzetti and Goldman misidentified the age of a Project Veritas operative. She was 25 and the duo reported she was 23. (The article also carried a headline, The Times said in its correction, that “misstated the origin of information about Erik Prince’s role in recruiting a former spy.” The Times said in its correction that “the information came from source interviews, not documents in a lawsuit.”)
O’Keefe said in the video that he had hung the correction above the Project Veritas office toilet so that when people “take a poop” it would be visible. The video also showed O’Keefe confronting Goldman, who was reporting a story on Project Veritas at the time, on a phone call and asking why he refused to be recorded.
The Times views the targeting of Goldman, Mazzetti, and Schmidt as a harassment campaign that is aimed at retaliating against the journalists for their reporting, people familiar with the matter told CNN.
A spokesperson for The Times did not provide a comment for the story. The spokesperson did not respond when asked if Rosenberg, Goldman, Mazzetti, or Schmidt had any comment.
But Dean Baquet, executive editor of The Times, has previously denounced O’Keefe and Project Veritas.
In 2017, Baquet said he found O’Keefe and Project Veritas to both be “despicable.” At the time, Baquet went so far as to say Project Veritas had committed a “mortal sin” when it sent a “young woman” to trick a young reporter into saying “really stupid stuff” on undercover film.
In a statement provided to CNN, O’Keefe asserted that it was The Times that had harassed him and his organization. O’Keefe said that The Times is like “an elite Ivy League frat house, which thinks it’s above scrutiny.”
O’Keefe added in his statement, “We have only just begun.”
O’Keefe has targeted other news organizations in the past, including CNN, which he is also suing for alleged defamation. That case, which CNN is aggressively fighting in court, remains ongoing.

Project Veritas uses its stings against news organizations to fundraise. For instance, the blog post on the Project Veritas website featuring the Rosenberg video asked supporters to submit a donation “to support our mission.”
The stings against news organizations also generate a lot of publicity and attention for Project Veritas. They have often been featured prominently on Fox and receive significant attention in the right-wing media universe.
Source: Read Full Article