The Sony WH-1000XM4 and Bose 700 both tick off all the basics for a premium headphone experience in 2020 and beyond — they help hush the noise around you with active noise cancelling, they deliver premium sound, they're comfortable, and they're wireless.

At $350 for the Sony WH-1000XM4 and $400 retail for the Bose 700, they offer more than simply the basics. You get important features that let you connect to two devices at a time (great if you switch between your computer and phone), and they also offer among the best phone call quality I've ever heard on headphones. You're getting excellent bang for your buck with these cans.

I've had the luxury and pleasure to try both of these headphones side-by-side, and there are important and major differences between the Sony WH-1000XM4 and Bose 700 you should know about before making a decision. You can also check out the full review for the Bose 700 here.

The Sony WH-1000XM4 can be preordered now, and will be released and available to buy starting in mid-August. The Bose 700 were released in June 2019. 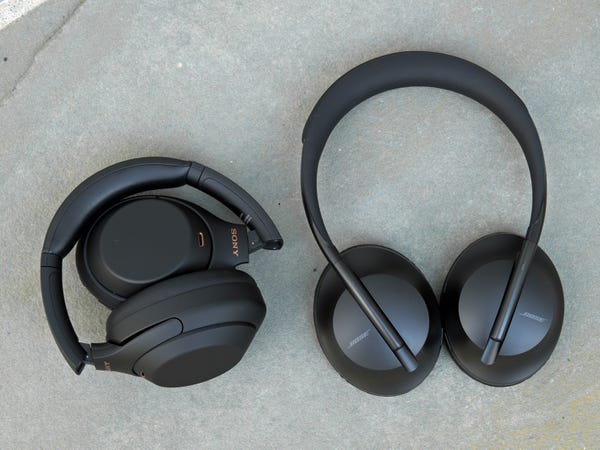 The Bose 700 have a more modern and sleek design with stylish organic curves throughout the headband and exterior earcups. On heads and ears, the Bose 700 feel comfortable. The pads are soft yet sturdy enough to keep their form over longer listening periods. They don't clamp down too much on my head and ears, and the headband doesn't hurt the top of my head over time, and I can move my head back and forth with having them slip off.

Meanwhile, the Sony WH-1000XM4 have a more neutral headphone design that few can complain about. Overall, the Sonys are more comfortable than the Bose. The Sonys are lightweight and slightly more plush and softer around the ears than the Bose 700, but still secure enough to prevent the headphones from moving around with head movements. The headband is comfortable and places less strain on the top of the head, too.

The Sonys can become a little more compact and fold up into a sort of ball shape with their folding earcup design, whereas the best the Bose can do is twist their earcups to become flat. 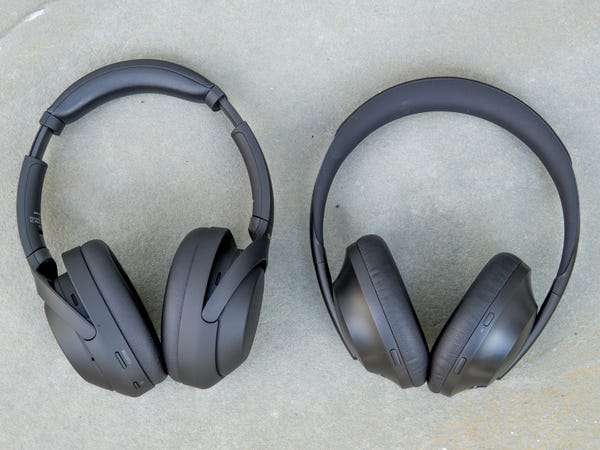 Bass-heads won't be satisfied here, however, as Bose tends to be more conservative and "refined" compared to the Sony WH-1000XM series — while listening to a lot of music, from Reggae to electronic music, I find myself wanting more rolling bass that fills my ears for the span of a song.

Sony WH-1000 XM4: The Sony WH-1000 XM4 produce a more powerful and exciting sound than the Bose 700. With that said, clarity, soundstage, and separation aren't as good — the Sonys almost sound muffled compared to the Bose. Out of the box, the Bose 700 are likely to be more appealing, at least for those who value clarity and clearly hearing different instruments as if they were spread out from each other.

But the Sonys really have two types of sound: out-of-the-box, and whatever you want them to be. Indeed, you can customize the sound the XM4s deliver through the Sony Music app, and it makes a big difference, and it's far more comprehensive than what you get with Bose or the built-in equalizers in most phones.

For me, Sony's customization means I can get the best of both worlds — the XM4's signature power and excitement, some extra bass, as well as a clearer sound with a wider soundstage and separation that's almost as good as the Bose.

The Sonys are more versatile than the Bose, and that counts for a lot. 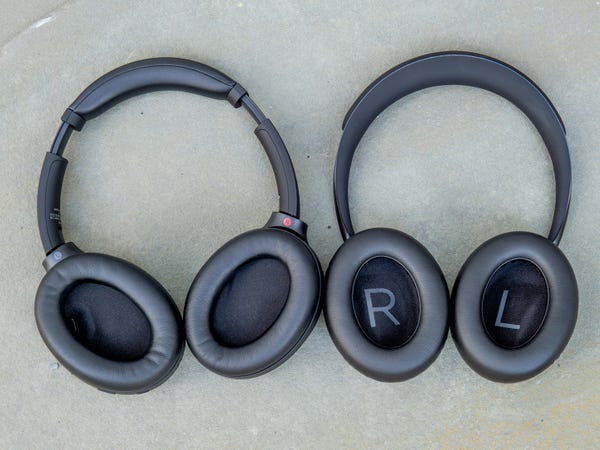 I tested the noise cancelling abilities of these two headphones in a room that measured 53 decibels, a level produced by an air conditioner vent blowing glorious cold air above me, and two loud Vornado fans (one medium, one personal size) blowing close by that simulated a fairly loud office. I also tested the noise cancelling around a 10KW power generator at sound levels between 65 and 85 decibels.

Both the Bose 700 and Sony XM4 do a remarkable and similar job of cancelling out noise. In my simulated office setting, the fan noises were almost completely eliminated without music. With music, even at lower volumes, ambient noise is all but forgotten.

As for the generator test, I could absolutely still hear the loud engine that creates 10,000 watts at 240 volts with both headphones, but the sound was dramatically reduced to a tolerable level.

If I had to pick one that made things quieter than the other, I'd say the Bose was ever so slightly more effective, but not by much at all. You'll be happy with whichever pair you go for when it comes to noise cancelling.

As for battery life, Sony claims 30 hours and five hours of listening time from a quick 10-minute top-off charge with 1.5A or more adapter. Bose claims a 20-hour battery life and three and a half hours of listening time from a 15-minute charge. Whether they actually last 30 hours in unclean — to be honest, I'm not timing how long I'm using them with every listening session. But I can safely say the Sonys lasted longer than the Bose before needing a charge. 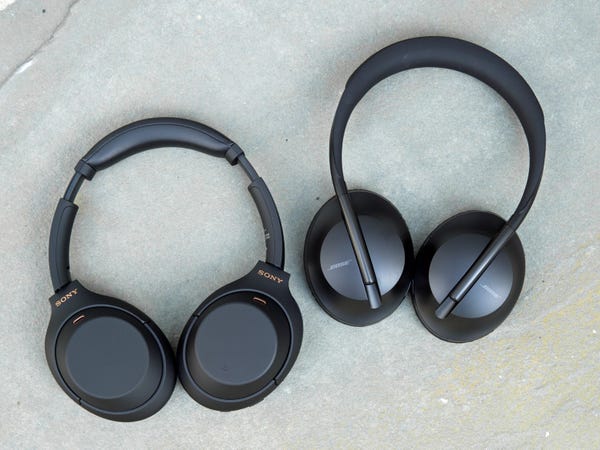 The Bose 700s' party trick when they were first released was their incredibly effective ambient noise cancellation during phone calls, which works for both you and the person you're speaking to on the phone.

I tested a phone call with both headphones while standing around the corner from a very loud 10KW power generator, where decibel levels read between 65 and 70 decibels — just below the 73.4 average decibel level of the NYC streets, according to this study by the National Institute of Health (NIH) from 2015.

The Bose and Sony headphones both performed very well. The person I called could hear my voice clearly over the sound of the generator, and couldn't actually hear the generator humming along at 70 decibels for most of the call. To be extra nitpicky, the person I called said the Sonys had more static noise than the Bose, and that my voice sounded more tinny.

To be sure, a phone call using headphones that don't have some kind of active noise reduction for calls would be extremely uncomfortable.

It seems the headphones' limit was about the 80 to 85 decibel range, where I stood right next to the generator, which is over twice as loud as 70 decibels. 85 decibels is about as loud as a gas-powered lawnmower or a leaf blower, according to the Center for Disease Control and Prevention (CDC). At 80 decibels, a conversation was impossible — both me and the person I called were constantly being cut off, and it simply wasn't a good time.

For reference, neither headphones worked as well at reducing the generator's noise than the phone I was using, the Pixel 4XL. In fact, the Pixel 4XL allowed a totally normal conversation right next to the generator at 85 decibels. It sucked for me, being right next to the equivalent of a leaf blower, but the person I was calling wasn't too affected.

Apps and other features 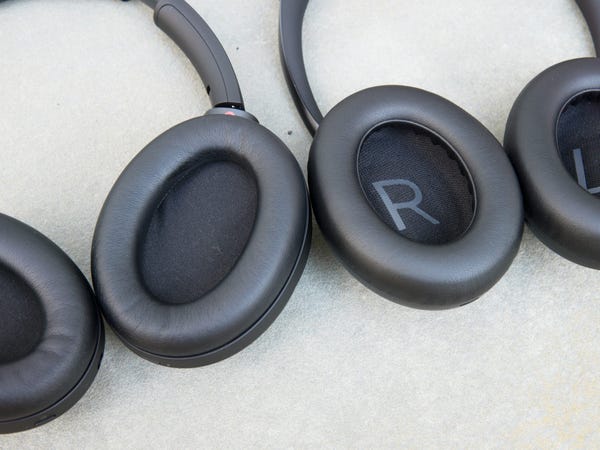 Both headphones have proximity sensors that pause and resume music when you take the headphones on and off.

Both headphones have Bluetooth multi-point, which means you can connect to two devices at the same time. It's useful if you use the headphones between your phone and your computer. This is a new addition for Sony, as the previous XM3 headphones didn't have multi-point.

Both headphones have touch sensor controls on the exterior earcups.

The Bose app offers pretty basic and generic customizations for a pair of "smart" headphones, like adjusting the level of noise cancellation and the level of your voice so you can hear yourself during a phone call. It also lets you customize what smart voice assistant you want to use.

Conversely, the Sony Headphones app is rich in features, but it's not as pretty or user-friendly.

It includes similar features as the Bose app, as well as a "Speak to chat" feature that automatically pauses music and turns off noise cancelling when you start speaking out loud, which is designed to let you keep your headphones on if someone starts speaking to you. By default, the music resumes and noise cancellation turns back on 30 seconds after you're finished speaking. You can adjust the amount of time for your music and noise cancellation to resume. It works surprisingly well, but at the same time, I think keeping headphones on while anyone is speaking to you is rude, so I'd take them off anyway.

There's also "Quick Attention" that lets you cover the right earcup to disengage noise cancellation and reduce audio volume. Noise cancelling and volume return once you remove your hand from the right earcup. It works well, and it's perhaps less rude, as covering the earcup is at least an indication that you're doing something to pay attention to the person you're speaking to.

There's also a "360 Reality Audio" feature that supposedly enhances audio with some kind of surround sound enhancements. The setup process is odd, as you need to take photos of your ears, and it only works with the Tidal, Nugs, and Deezer streaming apps. I don't use any of these apps, so I couldn't test this feature. Honestly, these kinds of features rarely end up enhancing anything for the better.

Which one should you get?

The $50 discrepancy between these two headphones isn't going to sway a decision here — you can find deals on the Bose fairly regularly, and the Sonys will get their days of deals soon enough (they were just released at the time of writing).

You'll be pleased with either seeing as they perform similarly in noise cancelling and phone call quality. And both have excellent sound quality.

But against my preference, I can see myself recommending the Bose 700 more often than the Sony WH-1000XM4 because they sound better out of the box, and I know some people aren't likely to fiddle around with an app to customize the sound.

If I know the person is a little more techy and they're open to customizing their sound through an app, I'd recommend the Sony WH-1000XM4 for their versatility. Indeed, the Bose sound great for a wide range of people, but everyone hears differently, and you might find a sound you prefer with the Sonys. In the Sony Headphones app, I like the "Bright" preset and a +7 "Clear Bass" setting.

U.K. at ‘Critical Point’ in Virus Surge With London at Risk

U.K. at ‘Critical Point’ in Virus Surge With London at Risk