The chief executives of some of Australia's largest retailers have praised the government's budget for its job-making measures and income tax cuts, with the nation's shopkeepers likely to be some of the largest beneficiaries of the new spending plan.

On Tuesday night, the Morrison government announced billions in budget measures which are set to directly benefit businesses, including massive asset tax breaks, wage subsidies for young employees, and accelerated income tax cuts which are set to spur spending in the retail sector. 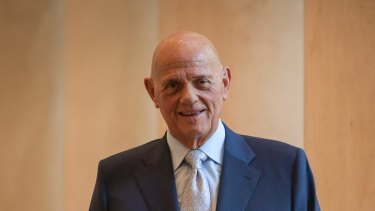 Premier Investments chief Solomon Lew said the budget was one of the best he’s ever seen.Credit:Eddie Jim

Solomon Lew, the billionaire founder of retail company Premier Investments, said the budget was one of the best he'd seen in his career and was set to benefit "nearly every single business in the country".

"It cannot be understated just how much this will provide a shot in the arm to employment, youth job creation, consumer confidence and spending. This budget will help bring the Australian economy out of the doldrums and back to where it needs to be," Mr Lew said.

Mr Lew's Premier Investments, which owns brands such as Smiggle, Peter Alexander and Just Jeans, employs a number of young casual staff and therefore may significantly benefit from the new $200-a-week 'JobMaker' hiring credit introduced in the budget.

The company's revenue is also under $5 billion, which means it is eligible for a new policy which will allow businesses to write off the full cost of any depreciable asset they buy before June 30, 2022.

"Treasurer [Josh] Frydenberg and the Morrison Government should be commended for delivering such a formidable, and importantly, manageable, budget that will provide a much-needed boost to national economy and the broader retail environment," Mr Lew said.

Brad Banducci, the chief executive of supermarket giant Woolworths, also expressed his support for the economic measures in the budget, along with the $100 million pinned to allow twice the number of annual Medicare-subsidised sessions with a psychologist or mental health professional.

"We welcome the budget as a positive measure to move the economy back towards a path of sustainable economic growth and job creation," Mr Banducci said.

"I wanted to particularly call out the increase in funding for mental health services, which are absolutely critical in supporting our collective wellbeing in these challenging times."

Australia's retail sector has performed better than expected through the COVID-19 pandemic largely due to massive stimulus from the government's JobKeeper and JobSeeker schemes, however, retailers had expressed a desire for the budget to tackle longer-term reform, such as industrial relations or business investment laws.

Such moves were absent in Tuesday's announcement, however retailers were still supportive of the largely business-focused budget. Australian Retailers Association chief executive Paul Zahra said the announcements would help keep "money in the bank" for struggling retailers.

"As with every budget, the devil is in the detail. Retail is the largest private sector employer and we look forward to understanding more specifically how the retail industry will be supported through the various skills and training programs to position it to thrive," he said.

The former David Jones chief also questioned the minimal support for women and lack of childcare support in the budget, noting retail was a "predominantly female" industry.

Analysts were largely positive on the budget's benefit for the retail sector, with Credit Suisse saying it was "very favourable", largely due to the income tax cuts and asset write-offs for businesses under $5 billion in revenue.

Citi analysts were slightly less sanguine, warning the stimulus measures were still a significant decrease on those provided in the 2020 financial year and heightened spending would be reliant on households being willing to dip into their savings.

Shares in retailers rose on Wednesday, with the consumer discretionary and consumer staples sectors up 1.8 and 1.7 per cent respectively just after lunch time.