Elon Musk and Jeff Bezos have taken their feud into space as the duel between rival plans to fill the sky with satellite “megaconstellations” threatens to encroach on each other’s orbits.

The two billionaires, who are roughly neck and neck as Earth’s first and second richest people, are pushing US regulators to favour their satellite networks, which will beam down internet signal to some of the planet’s most remote areas. 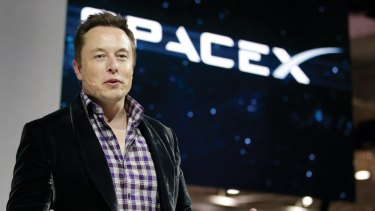 The tussle over territory represents a new phase in private space flight, suggesting companies may compete just as fiercely as Russia and the US did during the Cold War.Credit:AP

SpaceX, Mr Musk’s company, already has more than 1000 of its Starlink “microsatellites” on order out of a planned 12,000, and it now wants to lower the orbit of around 2800 of them to improve broadband speeds and lower the danger of future space debris.

But Mr Bezos’s Amazon argues that Starlink’s new orbit would interfere with signals and create a danger of collision with its own $US10 billion ($13.1 billion) Kuiper project, which has not yet launched any of its 3236 satellites.

On Tuesday, Musk criticised Amazon’s objection on Twitter, saying: “It does not serve the public to hamstring Starlink today for an Amazon -satellite system that is at best -several years away from operation.” SpaceX said that predictions of interference were based on “cherry-picked” data and accused Amazon of “demanding exclusive access” to lower orbits without “launching a single satellite”.

Amazon quickly shot back, saying: “The facts are simple. We designed the Kuiper System to avoid interference with Starlink, and now SpaceX wants to change the design of its system.

“Those changes not only create a more dangerous environment for collisions in space, but they also increase radio interference for customers.

“Despite what SpaceX posts on Twitter, it is SpaceX’s proposed changes that would hamstring competition among satellite systems. It is clearly in SpaceX’s interest to smother competition in the cradle if they can, but it is certainly not in the public’s interest.“

The tussle over territory represents a new phase in private space flight, suggesting companies may compete just as fiercely as Russia and the US did during the Cold War.

Amazon and SpaceX’s dispute focuses on their differing orbital “shells”, meaning layers of space at different distances from the Earth’s surface where large numbers of satellites can orbit without crossing over. Serious collisions in space have been relatively rare but the rush of new microsatellite companies such as SpaceX and the British Government-owned OneWeb could make them more common. SpaceX asked The Federal Communications Commission last year to let it move 2,824 of its future satellites into a lower shell, from between 1100km and 1300km to 540km and 570km, with a 30km buffer for error.

Amazon objected, noting that the buffer would overlap with its lowest approved shell for Kuiper, which is set at 590km with a buffer of 9km. The argument has continued despite concessions. Scientists have long worried that collisions in space could create a chain reaction of debris known as “Kessler syndrome”, potentially damaging communications networks on Earth by knocking out existing satellites.

In 2019, a European Space Agency satellite was forced to fire its thrusters to avoid an unacceptable risk of hitting a Starlink satellite.