Nationwide protests over the racism of America’s present have also reignited furor against the most powerful symbols of its racist past: the roughly 1,700 Confederate monuments and symbols that still dot the nation’s landscape.

Since a Minneapolis police officer killed George Floyd, protesters have graffitied and toppled Confederate monuments across the American South, including in Richmond, Virginia, the former capital of the Confederacy, and Birmingham, Alabama, in the still-beating heart of Dixie. Local leaders have backed efforts to remove statues in both cities, and in states like Kentucky, Indiana and others that never left the Union. The U.S. Marine Corps banned its troops from displaying the Confederate battle flag, and on Monday, a U.S. Army official told Politico that the Pentagon may consider changing the names of military bases named for Confederate generals.

The effort to reckon with slavery and the men who fought to preserve it has even gone global: On Sunday, demonstrators in the United Kingdom tore down the statue of a prominent slave trader in Bristol, then ceremoniously dumped it into a nearby river.

The renewed push to rid American public squares of the racist symbols of the Confederacy came as activists and protesters scored major policy and political victories, including pledges to cut police budgets, electoral wins for candidates who support police divestment, and a promise from the Minneapolis City Council that it would dismantle and rebuild the local police department in the wake of Floyd’s killing.

Next to drastic efforts like that, tearing down the memorials to long-dead traitors may seem like a mostly symbolic act. But the fight against Confederate monuments, activists and historians say, is as necessary as any reform effort during a moment of deep national reckoning.

“The symbols help sustain racist policies and racist policies help sustain the symbols,” James Grossman, the executive director of the American Historical Association, said of the statues. “Those statues legitimate racism. They legitimate violence against Black people, because slavery was a system of violence against Black people. To take down those statues is to make a statement about how a community’s values are changing.” 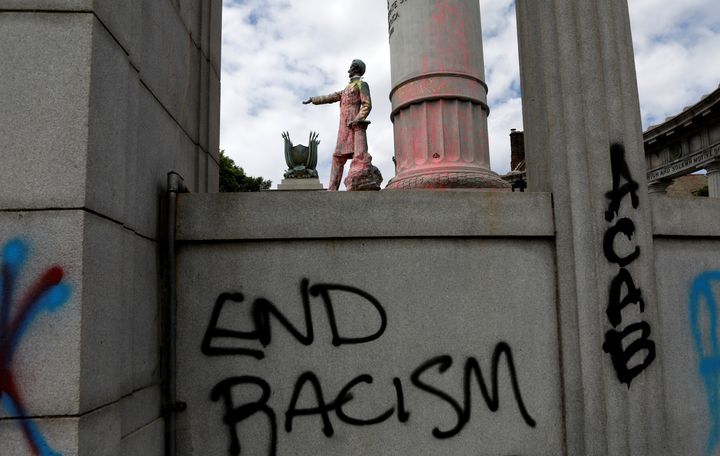 But with protesters targeting monuments nearly a month before the law goes into effect on July 1, Northam last week pledged to tear down Richmond’s century-old statue to Robert E. Lee “as soon as possible.” Richmond Mayor Levar Stoney, meanwhile, last week introduced a resolution to take down four other Confederate statues that line the city’s Monument Avenue, one of the most striking memorials to the Confederacy in the nation.

No state has more Confederate monuments than Virginia, and Northam’s decision could mark a “tipping point” for the effort to protect the honorifics, said W. Fitzhugh Brundage, a history professor at the University of North Carolina.

“I anticipate that in the next six months or a year, we’ll see them come down all over Virginia,” Brundage said. “That’s the most significant Confederate commemorative landscape in the South. The tipping point has been reached.”

Nearly all of America’s Confederate monuments were built in the late 1800s or early 1900s, during the Lost Cause Era efforts to mythologize the Civil War and the South’s reason for seceding to fight it. Statues went up across the South, in an effort to obscure the war’s roots in the effort to preserve slavery, and to remind Black Americans during the Jim Crow years that they were still subject to violent and oppressive white supremacy. Another wave of statues were erected in the 1950s, in response to desegregation efforts and calls for civil rights. They spread across the nation to reinforce the same message even in states that hadn’t seceded.

Black Americans have targeted the monuments for decades because of their symbolic power, turning them into flashpoints for activism when protests over racial injustice break out.

There were similar sudden efforts to erase signs of the Confederacy after Dylann Roof, a white nationalist, killed nine people at a Black church in Charleston in 2015, and after the “Unite the Right” rally in Charlottesville inflamed the country in 2017. (The rally took place amid efforts to remove Charlottesville’s Robert E. Lee statue.)

More than 100 Confederate monuments and symbols fell between 2015 and 2018, according to the Smithsonian, but at least 1,700, including nearly 800 monuments, remained.

And even as cities pushed to enact policies aimed at curbing the disparities between Black and white residents, the statues’ continued existence served as a barrier to real change ― an ugly reminder of how the country’s racist past continued to thwart progress in the present day, said Wes Bellamy, a former member of the Charlottesville City Council who has long argued for the removal of the Lee statue.

“We know that these are symbolic, but symbols matter,” Bellamy said. “You cannot deny just how important these racist symbols are, even when you’re looking to address things like affordable housing, education and criminal justice reform. I can have sweeping legislation, but people still have to walk by and see something painful like a 28-foot statue in their public park. That sends a very strong message: You may have the policy, but we control the land.”

The speed with which tearing down the monuments has won the backing of political leaders, though, may be an indication that the message has begun to sink in with white Americans, as the protests and the police killings that led to them have made it impossible to ignore the realities facing Black people.

“The connection between slavery, Jim Crow and ongoing systemic racism in American society is much more familiar than it was three or five years ago,” Brundage said. “It’s so much easier for Americans, and particularly white Americans, to connect the dots from slavery to the current-day problems.”

That those attitudes are changing has shown up in polls and at protests: A majority of Americans have said the demonstrations are justified, and for the first time, more than half of Americans now agree that police treat Black and white people differently. Approval for the police has fallen to near-record lows, while calls to “defund the police” ― or devote less public money to police budgets while spending more on social services and other violence prevention efforts ― have reverberated across the country. 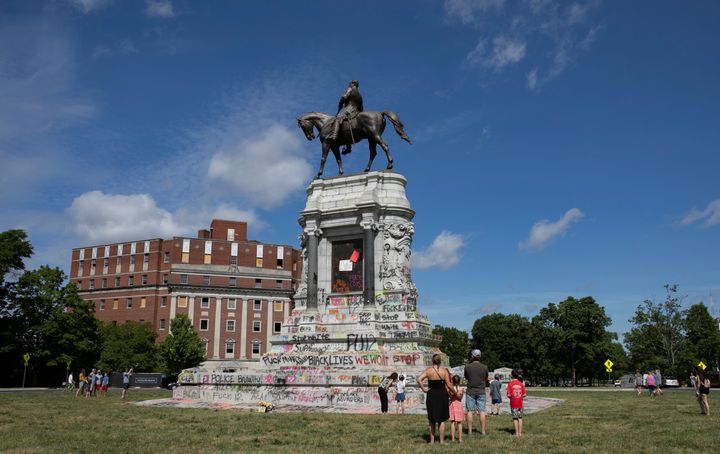 Previous efforts to take down monuments have faced stern backlash from opponents who have argued that activists want to erase history. State lawmakers and local residents have passed legislation and filed lawsuits to block efforts to remove the memorials.

Although the Virginia GOP opposes the removal efforts, there has been less blowback overall so far this time around, which both Brundage and Grossman said is likely a product of continued activism against the memorials and the increased awareness that has resulted from the spread of videos documenting both police officers’ and ordinary white Americans’ racist treatment of Black people.

“Defenders of these monuments are truly on their back foot,” Brundage said. “This is a different moment.”

As the monuments continue to fall, they have taken on a different symbolic power for Black Americans like Bellamy, who kept pushing for the removal of Charlottesville’s statue of Robert E. Lee even as he faced death threats and doubters who told him it would never fall, and that the laws protecting it would never change.

“We’re in a new era in which the impossible is possible,” he said. “There’s an opportunity here for us to be able to push legislation and policy that create change. Now, we can actually say that this stuff works.”

Bellamy went on his normal morning jog Monday, through downtown Charlottesville and past the statue of Lee that likely won’t stand much longer.