When some 2 billion people worldwide tuned in for Princess Diana’s funeral in 1997, mobile phones resembled bricks, broadband was yet to replace dial-up internet and social media didn’t exist.

On Monday night Australian time, anyone with an internet connection will be able to watch and comment on the final farewell of Britain’s longest-reigning monarch, Queen Elizabeth II. Many in the media industry believe it will be the most-watched event in history, and there have been predictions as many as 4 billion people will tune in. 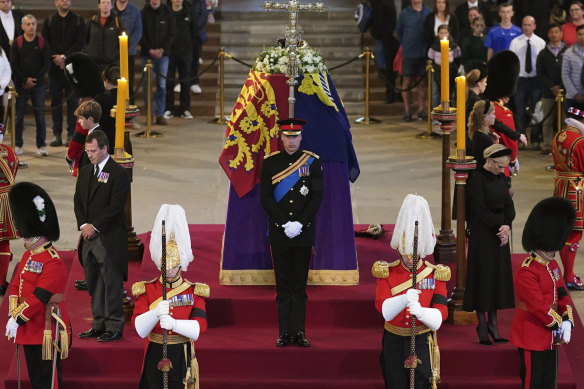 Prince William leads the vigil of the Queen’s grandchildren on Saturday in London.Credit:PA

The resources devoted to the event are significant. Nine, the publisher of this masthead, has more than 40 staff there, the ABC has 27 employees, and Network 10 sent a team of 17. Seven and Sky News declined to disclose how many staff were sent to cover the event.

Nine director of news Darren Wick said he expected it to be the most-watched event in history, “much bigger” than the audience for Princess Diana’s funeral in 1997. “Technology plays a big part in that, people can watch it on their phones from the North Pole or the South Pole,” he said.

“It’s possibly the first time in human history … [where] you will see a large number of international audiences watching the same event at the same time and either participating or consuming social media alongside that event,” she said.

“Everything has been very British stiff upper lip, and pomp and ceremony, so the one minute where he [King Charles] shows himself human, people want to see that.”

Monday’s funeral will cap a week of extensive coverage, which has attracted mixed viewing figures and criticism. More than 9.5 million people across Australia’s five capital cities tuned in to news and current affairs across all free-to-air channels at least once during the week, 800,000 more than the previous four-week average of 8,784,677.

Seven’s broadcast of the proclamation of Charles III attracted only 279,000 viewers, while 252,000 tuned in to Nine’s re-run of a 2016 documentary about the Queen’s life on Sunday.

Simons said most of the coverage was reasonable given the historical significance of the Queen’s death, but said the attention given to some events, including the widespread coverage of King Charles’ pen troubles, was excessive.

“It’s not as though he was abusing staff or anything. He was displaying what I saw as mild irritation, and it went worldwide,” she said.

Wick said the moment showed the new King’s human side. “Everything has been very British stiff upper lip, and pomp and ceremony, so the one minute where he shows himself human, people want to see that,” he said.

Nine, Seven, the ABC News channel and Sky News will host day-long coverage leading up to the funeral, which will begin around 8pm AEST.

Network Ten will be the only commercial channel not showing the funeral on their main channel, relegating their coverage to 10 Bold in favour of The Amazing Race.