Ahead of a historic vote Friday in the U.S. House on legislation to admit the District of Columbia as the 51st state in the union, Sen. Tom Cotton (R-Ark.) took to the Senate floor to announce his opposition, even though the Senate has no plans to vote on the measure.

Cotton dismissed the idea of statehood as an attempt by the Democratic Party to seize permanent power and “an act of historic vandalism.” He dismissed the fact that the district has a population larger than two states ― Vermont and Wyoming ― because Wyoming is a “well-rounded working-class state,” with “many workers in mining, logging and construction.” Cotton didn’t need to mention that the population of D.C. is 46% Black while Wyoming is 92% white to get his point across. But then he went further.

What connects the vastly different Bowser, the current mayor, a center-left Democrat who endorsed Michael Bloomberg for president in 2019, and Barry, the deceased former mayor, a populist politician and onetime civil rights icon best known for his crack-cocaine arrest? They are Black and were elected by the voters of a plurality Black city. Cotton is concerned they wouldn’t properly defend the White House.

The people of Washington had no one to reply to Cotton’s racist dismissal of them because they do not have any representation in the Senate as they are not a state. If they did, one of D.C.’s two likely Black senators would be there to reply to Cotton.

“It’s not a guarantee that if D.C. becomes a state there’s going to be two more African American senators,” said Bo Shuff, the executive director of D.C. Vote. “But an African American candidate would have a better chance here.”

Advocates for D.C. statehood argue there’s a direct link between the protests against structural racism that have erupted nationwide in the weeks since George Floyd, a Black man, was killed by Minneapolis police and the House Democrats’ decision to hold the first congressional vote on statehood in more than two decades.

“We’re at a moment where Americans are rising up in favor of structural democracy changes to fix structural racism,” said Stasha Rhodes, the campaign director of 51 for 51, which is pushing Democrats to eliminate the filibuster and pass D.C. statehood if they win control of the Senate in 2020. “The fact that there’s only been 10 Black senators in all of American history points to structural racism.”

The 10 Black Americans who have served in the Senate since 1789 is equal to just .05% of all the people who have ever taken a seat in Congress’s upper chamber. Sen. Hiram Revels (R-Miss.) became the first Black senator during Reconstruction in 1870, and Sen. Blanche Bruce (R-Miss.) was the second in 1875. (P.B.S. Pinchback was elected senator as a Republican from Louisiana in 1872 but was never seated.) After Blanche’s term ended in 1881, the Senate would not see another Black member until Republican Sen. Edward Brooke’s election in Massachusetts in 1966.

Since then five Black senators have been elected and another two appointed to temporary vacancies. Two of them ― Carol Moseley Braun and Barack Obama, both Democrats ― were elected to the same Illinois Senate seat. Shockingly, no two Black senators served concurrently until 2013, when Sen. Cory Booker (D-N.J.) won a special election and joined Sen. Tim Scott (R-S.C.). There are now three Black senators, with Booker and Scott joined by Sen. Kamala Harris (D-Calif.) in 2017. Still, no Black senator has ever chaired a committee.

“The Senate entrenches white, male, rich rule, and will do so for a long time in the future. And that’s kind of by design,” said Todd Tucker, the director of governance studies at the Roosevelt Institute and the author of a report on how to reform the Senate to make it more democratic.

The Senate’s lack of Black members is directly related to its empowerment of smaller, often rural and majority-white states like Maine, New Hampshire, the Dakotas, Montana and Vermont. The 10 smallest states are an average of 80% white and just 4.7% Black. The country as a whole is 60.1% white and 13.4% Black.

Black voters are underrepresented in the Senate by 16% relative to their total population, according to a study by Michael Ettlinger and Jordan Hensley from the University of New Hampshire Carsey School of Public Policy. The admission of D.C. as a state would reduce that underrepresentation by more than one-third, to 10%.

Intense political polarization around race adds to the problem. Of the 14 states where Black residents make up more than 15% of the population, eight are in the Deep South, where Black voters are essentially monolithic in their support for Democrats and white voters back Republicans with only slightly less unanimity.

But all of the above remain underdogs ― West and Booker still need to win their primaries, Harrison is running in a bright red state, James is trailing in the polls and Warnock will likely need to triumph in a January runoff that has historically favored Republicans.

And it’s just as possible that the number of Black senators could soon drop. Scott has already announced his intention to retire instead of running for reelection in 2022, and Harris is a favorite to join presumptive Democratic presidential nominee Joe Biden’s ticket as vice president, which would set off a free-for-all for her seat.

The problem is not entirely structural. Solidly blue states with significant Black populations, including New York and Maryland, have never elected Black senators. National Democrats have passed on chances to back Black candidates for Senate. In 2016, even the Congressional Black Caucus stayed neutral as Rep. Chris Van Hollen triumphed over Rep. Donna Edwards in Maryland. The same year, the Democratic Senatorial Campaign Committee backed Rep. Tammy Duckworth, who is Asian American, over Black attorney Andrea Zopp for an ultimately successful challenge to Sen. Mark Kirk (R-Ill.).

This cycle, national Democrats are backing Harrison, Espy and Warnock, and they aggressively recruited Stacey Abrams to run for Georgia’s other Senate seat. But they also endorsed two white candidates in diversifying states, picking attorney and veteran Cal Cunningham over state Sen. Erica Smith in North Carolina and backing veteran MJ Hegar over West in Texas. 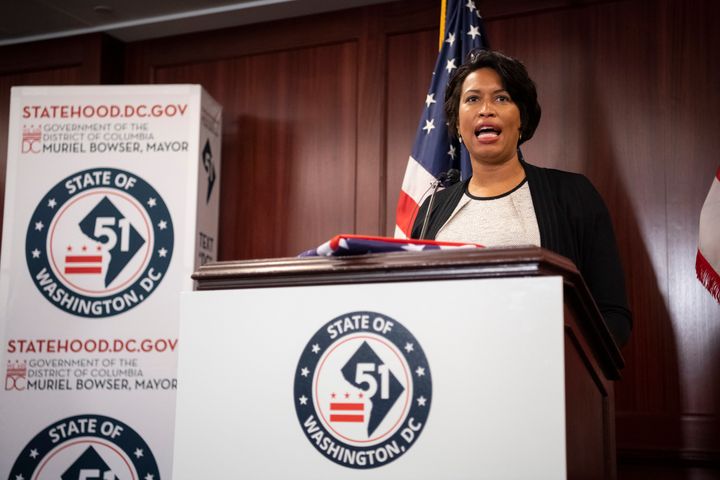 The admission of D.C. as a state would likely ensure that faces that look like 13% of the nation are always included in debates over Supreme Court justices, treaties with foreign nations and executive branch appointees. It would also make sure that D.C. can finally argue for itself against the likes of Tom Cotton.

Cotton’s racist invective against the people of the district is nothing new. After Black residents of the district were granted suffrage before the passage of the 15th Amendment, Congress eliminated its local elected government. It would not return for a century. In 1943, Sen. Pat McCarran (D-Nev.) demanded that a committee hearing on the district’s right to govern itself focus on the problems of Black suffrage (he was against it), a subject “people say you can’t talk about.” Or, as Sen. Allen Ellender (D-La.) said in 1963, “Negroes cannot govern themselves.”

It is no coincidence that the Senate did not see another Black member to counter these voices for practically the same length of time as D.C. was stripped of its right to govern itself.

As the nation decides whether to go forward with racial progress or perhaps take an old and familiar route away from it, the admission of D.C. as a state would ensure that Black voices matter in the Senate.

“We’re at a moment where Americans are rising up in favor of structural democracy changes to fix structural racism,” Rhodes said. “It would be hopeful. It would be a step in the right direction.”