The Twitter accounts of some of the world’s most powerful companies, politicians and billionaires began posting bizarre messages on Wednesday afternoon, promising that if followers sent $1,000 in bitcoin to an anonymous cryptocurrency address, they would get back double the amount.

It was almost immediately clear that these accounts had been hacked, but the messages still led to chaos. As more prominent accounts tweeted the scam ― including Democratic presumptive nominee Joe Biden, Apple and Bill Gates ― Twitter partially shut down its services and is now investigating what led to its biggest security breach in years.

Although the motivation behind the hack appeared to be amassing Bitcoin, it has intensified concerns among cybersecurity experts and disinformation researchers about how social media manipulation could be used during the U.S. presidential election. If hackers can dupe at least some people to send cash into the void, what would happen if they instead posted authentic-looking tweets about purported direct messages, voting sites and contested elections?

The hack has the potential to create a wide range of disinformation, including falsified documents claiming to be from compromised accounts. There is also the possibility that a similar breach happens again in the future. If Twitter isn’t secure, nefarious actors could hack accounts people use for information — like news outlets or official government agencies — and instead sow confusion and spread falsehoods about the voting process itself, experts said.

“The biggest concern for me isn’t necessarily that an account like [President Donald] Trump’s would be hacked, it’s if people could gain access to really legitimate, non-partisan sources of information and post misleading information on those accounts,” said Nina Jankowicz, a disinformation fellow at the Woodrow Wilson International Center for Scholars and author of “How To Lose The Information War.”

Although Trump being hacked would have obvious national security implications, his fake tweets would be immediately scrutinized and could be debunked rather quickly. A widespread hack of state election officials or local government accounts, however, could create chaos in the reporting of election results that would cast doubt on the outcomes and lead to delays.

Bad actors could also use a hack to suppress voting, researchers say, targeting key districts on election day with disinformation about polling locations, required documentation or closing times. False information about COVID-19 outbreaks at polling stations could create panic and deter voters. There is also already an epidemic of online misinformation regarding mail-in voting, with far-right activists promoting a conspiracy that Democrats will use the process to commit voter fraud. A hack that promoted false political narratives could further divisions and undercut the voting process.

“If this happened late October or the first few days of November, and instead of Bitcoin it was mail-in ballots, disinformation actors could easily manipulate trust in the system and disenfranchise millions of voters,” said Diara J. Townes, an investigative researcher at First Draft, an organization that monitors online misinformation.

“It would be a question of how many people still believe voting by mail is safe, rather than how much bitcoin did the scammers get.” 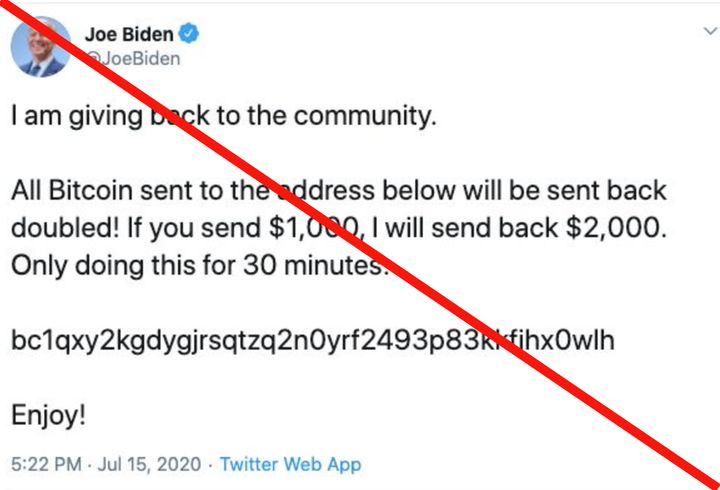 A Gift For Bad Actors And Conspiracists

Even if Twitter and other platforms manage to deter any attempted cyber attacks or coordinated disinformation campaigns around the election, Wednesday’s hack alone could have insidious and destabilizing effects on the campaigns. The hack compromised the accounts of numerous powerful and highly politicized figures, and researchers worry that there may be a wave of disinformation that purports to be leaked documents or messages from the hack.

“The uncertainty around who did this, how it happened and what the objectives of it potentially were could lead to significant disinformation campaigns,” said Chloe Colliver, head of the digital research unit at the Institute for Strategic Dialogue think tank.

“It opens the door to a number of malicious actors spreading disinformation about supposedly leaked data, direct messages and different elements of material that it will be difficult for people to know whether it’s real or false,” Colliver continued.

A more likely scenario than the president’s Twitter account being taken over may be Trump himself retweeting false information about Biden, or anti-vaccine activists spreading conspiracies about Gates, that claim to be leaked from the hack. There has already been talk on the online message board 4chan from various disinformation actors discussing the hack, according to Colliver.

Twitter, which has faced continuous scrutiny over misinformation and election influence campaigns, issued a statement saying that it was working to determine what information that hackers may have been able to obtain from affected accounts and any other malicious activity they might have carried out while they had access. The company stated that they believe the hack was a “coordinated social engineering attack” which targeted some of its employees who had special access to internal tools. The platform has vowed to fix any lapses in its security ahead of the election.

Transparency around the hack and what was accessed is important to stopping disinformation from emanating, but Twitter itself is also a highly politicized company that right-wing politicians and far-right activists have dubiously claimed has an anti-conservative bias. The lapse in security already has the potential to make users second-guess the information they may receive even from trusted accounts, while opening the door for partisan conspiracies and attacks.

“It just leads to the environment of distrust that allows disinformation to flourish and that bad actors prey on,” Jankowicz said.