Thousands of supporters of President Donald Trump poured into Tulsa on Saturday, filled with energy for his first campaign rally in three months but short on masks in a city reeling from a spike in Covid-19 cases.

Outside the 19,000-seat BOK Center, a Confederate flag flew overhead as a man with a megaphone and American-flag cowboy hat led chants of “We want Trump!”

Masks were rare among those crowded outside the arena. Stephen Nelson, 35, said he doesn’t believe governmentdata showing a surge in Tulsa cases. A contractor forWalmart who lives in Rogers, Arkansas, Nelson said wouldn’t use a mask or take any other precautions during the rally.

Others were less confident. “I am concerned,” said Gabrielle Gilliam, 62, a retired office administrator for Edward Jones who lives in Muskogee, Oklahoma. She wore a cloth mask around her neck that she said she would don if she’s permitted inside the arena. She said she might try to stay outside. “Out here in the open air, I’m OK.”

The Tulsa Health Departmentannounced on Saturday that the total number of confirmed cases had risen by 6.6% to 2,206 out 10,037 statewide. 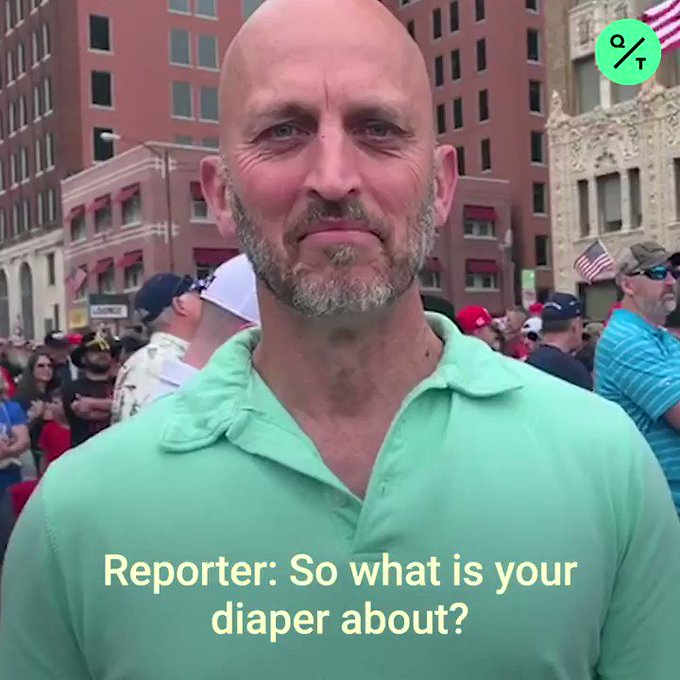 By playing this video you agree to Twitter's use of cookies

The rally, which Trump considers the official start of his re-election campaign, was supposed to signal that America is well on its way back to normal after weathering both the coronavirus outbreak and nationwide protests against police brutality. Instead, it’s led to new scrutiny of the president’s handling of both the pandemic and the nation’s divisive racial inequities.

Health officials in Oklahoma had recommended delaying the event, expected to draw at least 100,000 people to the state’s second-largest city. The rally is scheduled to start at 7 p.m. local time.

A counter-rally is planned a few blocks away in Tulsa’s Veterans Park. “I want it to feel like a festival or block party, so we can ignore the fact that he’s here,” said organizer Tykebrean Cheshier, 21. “We don’t want to be so riled up that we forget to have fun and eat a hot dog.”

After a phone call with the president on Friday, Tulsa Mayor G.T. Bynum lifted a curfew he had set for the area around the arena -- meant to avoid incidents between protesters and Trump supporters.

As of noon, there were few anti-Trump demonstrators in the vicinity immediately surrounding the event center. Joe Monroe, 77, held a sign that showed Trump with a mask over his eyes and the words “Doom Cough.” Asked why he thought there weren’t more protesters, he said, “I think a lot of them feel like it’s a waste of time.”

“It probably is,” said Monroe, a physician’s assistant in Tulsa who was wearing an N95 mask. “And frankly, it’s a little bit scary unless you’re a big stupid idiot like me.”

In early afternoon, Tulsa police handcuffed and took away a protester wearing an “I Can’t Breathe” shirt, MSNBC video showed. She said she had a ticket to the Trump event.

Among the Trump supporters, John Kuhn, 31, was one of the few wearing a mask. He also wore a single glove that he said allowed him to open doors and touch other surfaces. “I read it stays on surfaces for 24 hours,” he said.

Kuhn, who’s training to be a physical therapist in Oklahoma City, doesn’t think many other fans will wear a mask during the rally. He said they likely see Trump and Vice President Mike Pence choosing not to wear protective gear and decide against it for themselves.

“I think the coronavirus is a huge made-up deal,” he said. “Plus, I’m young.”

Rudy Hernandez, 53, stood on the outskirts of the people gathered in the street. He said he’ll put on a mask once it’s time to enter the arena because it’ll be more difficult to maintain social distancing.

Hernandez, who was recently laid off from his job at oilfield service companyHalliburton, likes Trump because of what he’s done for the economy.

“He is bringing us out of a hole that Obama made for us all. Drilling started up again. The economy was booming. 401ks were doing great,” Hernandez said. “If anyone can pull us back from what the Saudis and the Russians did to the oil market, it’ll be him.”

On Friday evening, just a few blocks from the Trump rally site, hundreds gathered on Greenwood Avenue to commemorate Juneteenth, which marks the end of slavery in the U.S. The businesses along the avenue are what’s left of what was known asBlack Wall Street, a thriving center of African-American commerce until White rioters burned it to the ground 99 years ago.

The Juneteenth celebrants listened to speeches and tried to ignore the even bigger gathering that was already forming Friday night.

“We’re not going to take the focus off the history,” said Anissa Stewart, 24, who had come to the event with her cousin. “This is a celebration.”

Some participants said they were relieved the rally no longer directly clashed with Juneteenth. But many said the decision to hold a campaign event in Tulsa felt intentional, especially in the wake of recent police brutality against African Americans.

“It’s pretty insulting,” said Daphne Woodward, 36. She and her husband, Scott, decided against bringing their children to this year’s celebration because they feared tensions could escalate if Trump supporters wandered over to Greenwood. “That hurts my heart,” she said.

Rocky Duran, a 43-year-old Tulsa resident, took his 7-year-old son to check out the scene where the rally will be held before they made their way over to the event in Greenwood. “I want him to see both sides,” he said outside Frios Gourmet Pops on Greenwood.

High schoolers Tyra Mason, 16, and Ladrea King, 17, said they were glad Trump’s rally was moved to Saturday but that having his supporters so close made them uneasy.

“I really think he just wanted a reaction from us,” King said. “He just doesn’t like Black people. And to come down on a day that’s important to us? If you want to be our president, you should know our history.”

Among those gathered at the campaign rally site was Bruce Carter, the leader of acontroversial group, Trump for Urban Communities, that supported him in 2016. Carter said he’s not yet sure if the president will get his vote again and that he wants to see more support for small businesses.

Carter, 49, who held a mask that read “Opportunity Matters,” said he disagreed with the criticism from other Black leaders about the rally’s timing and location.

“The fact that the rally is taking place at the time that it is ends up being probably the best thing that ever happens to Tulsa’s Black Wall Street,” he said. “Now everyone knows what happened. And now they also have a defined understanding of June 19th.”

— With assistance by Mario Parker, Ben Steverman, and Donald Moore