Transurban says the $2.8 billion sale of a 50 per cent stake in its network of American roads to three superannuation funds will bolster a war chest to bid for new growth assets likely to include the remainder of Sydney’s Westconnex.

The toll road giant’s boss Scott Charlton said on Thursday the partial sale of its roads in the Greater Washington area to AustralianSuper, UniSuper and the Canada Pension Plan Investment Board (CPP) had been on the cards for 18 months and was not a response to COVID-19. 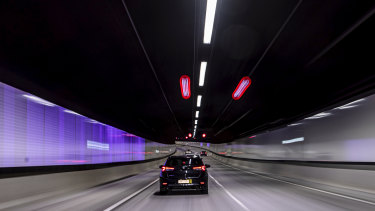 Transurban will pump the proceeds of the sale into new roads such as Sydney’s Westconnex. Credit:Brook Mitchell

“This is all about a new phase of growth. Partnering now with these investors means we can free up capital to seize these opportunities and significantly extend our footprint in North America and Australia,” Mr Charlton said.

“We know that the project pipeline in North America and Australia is significant. It’s as big as we’ve ever seen it. We think it’s likely to grow even further as governments look to infrastructure programs to help the economic recovery as the pandemic risk subsides.”

Mr Charlton said the first cab off the rank is the Maryland Express Lanes project, also in the Greater Washington area, for which Transurban has been shortlisted to build and operate.

Next is the potential to buy the 49 per cent of Sydney’s Westconnex it does not already own from the NSW government, he said. Road upgrades and widening projects were also on the cards for Sydney’s M7 and M5, and Brisbane’s Gateway and Logan motorways.

“There’s several other things that aren’t public that we hope we can create opportunities [with]… both here in Australia and North America,” he said.

“But I guess, with all these things, nothing happens quickly. The pipeline is tens of billions of dollars that we see out there and so we’re pretty excited about the opportunities.”

Transurban has previously invested in assets alongside the three retirement funds involved in the transaction. Australian Super is buying a 25 per cent stake, Canada Pension Plan Investment Board (CPP) 15 per cent and UniSuper 10 per cent.

The three funds also have exclusive rights to invest alongside Transurban in new projects in Virginia, Maryland and Washington DC.

Transurban said traffic was recovering strongly in Australia as COVID-19 restrictions lifted, with Melbourne’s CityLink down only 16 per cent on Wednesday compared to pre-COVID, after being down 60 per cent in August.

But traffic remained subdued on its North American roads as the US continues its struggle to bring COVID-19 under control.

RBC Capital Markets analyst James Nevin said Transurban secured a strong price for the roads, with the net realised sale price of $2.75 billion representing a $1 billion increase from his valuation.

“We had recently lowered our valuation on the US assets due to the uncertainty around future toll prices on these lanes as traffic returned post-COVID,” Mr Nevin said.

“This improves [Transurban’s] capacity to fund investment opportunities, the most obvious short-term one being the NSW government’s sell-down of its remaining 49 per cent stake in Westconnex,” he said.

Transurban’s shares bounced between 1 per cent higher and lower on Thursday and at 3pm were flat on their opening price $14.08.