Toll road giant Transurban says the competition regulator will not stop it from taking full ownership of Sydney’s WestConnex. It expects the NSW government’s $10 billion-plus auction of the road to be finalised by October.

The ASX-listed company and its Sydney Transport Partners (STP) consortium already own 51 per cent of the 33 kilometre road project. The pair have been viewed as the leading contender to buy the remaining stake. 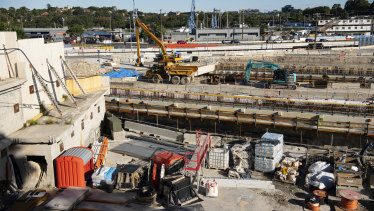 “One of the great assets in the world”: WestConnex construction surrounding Rozelle and Lilyfield. Credit:Wolter Peeters

Michelle Huey, Transurban’s group executive NSW, confirmed on Monday that the company will bid for the rest of the road, which analysts estimate is worth between $10 billion and $12.6 billion.

“I can also confirm the [Australian Competition and Consumer Commission] has advised they will not oppose STP’s acquisition of the remaining interest in WestConnex in the case we are successful,” Ms Huey said during an investor update webcast.

“We are expecting the process to conclude in the third quarter of this year. However, I would point out the process is being run by the NSW state government and remains subject to change.”

The ACCC threatened to torpedo Transurban’s purchase of the first half of WestConnex in 2018 when it raised concerns about whether that would further the group’s stranglehold over Sydney’s roads, giving it an unfair advantage when bidding for future assets and denying motorists the potential for an alternative owner to offer cheaper road fees.

The NSW government’s formal sale process for WestConnex will commence shortly following an expression of interest process, with the state auctioning off the remaining stake in two 24.5 per cent tranches. The Transurban consortium has a “right of first offer” over the remainder of the road under the terms of the 2018 acquisition.

Superannuation-fund backed IFM Investors narrowly missed out to Transurban in the 2018 auction, and market sources say the asset manager is also planning to bid for the 49 per cent stake now on offer.

Transurban chief executive Scott Charlton told the investor update on Monday that WestConnex was “one of the great assets in the world” and that taking full control was a “massive opportunity” for the $38 billion company.

“We’re currently the operator, which is great for us… but obviously we’d be keen to see if we can create the value that the government needs,” he said.

Ms Huey said that WestConnex – which links Sydney’s north shore, northern beaches, Sydney Airport and the southern suburbs – said the road would give Transurban the opportunity to ride on Sydney’s growth for the next 40 years.

“It provides a huge relief to a very congested city, so the success and the growth of the traffic on WestConnex is built on the fundamentals and the economics of Sydney itself,” she said.