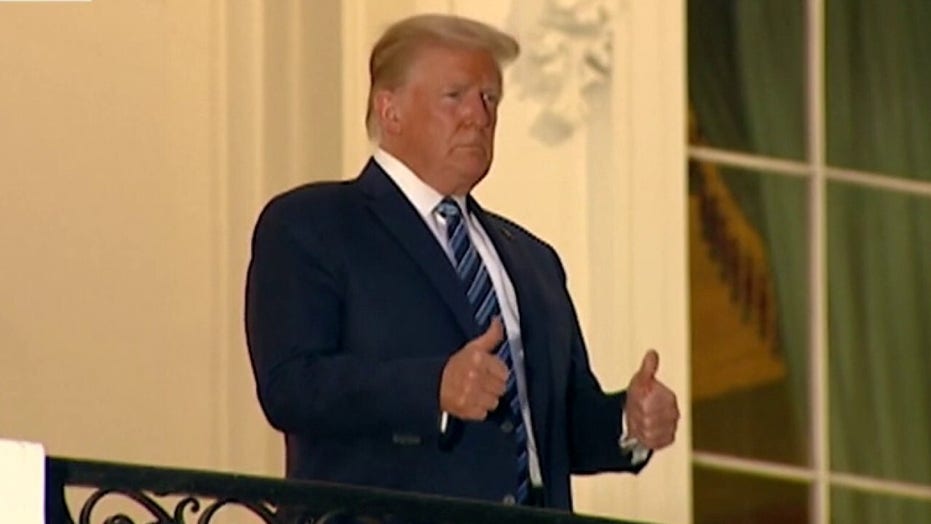 When could Trump’s doctors give president the COVID all-clear?

White House physician Dr. Sean Conley said in a new memo on Wednesday that President Trump has been “fever-free” for four days and has not had any symptoms of the novel coronavirus for “over 24 hours.”

“The President this morning says ‘I feel great!’,” Conley wrote in a memo to press secretary Kayleigh McEnany. “His physical exam and vital signs, including oxygen saturation and respiratory rate, all remain stable and in normal range.”

TRUMP, FIGHTING CORONAVIRUS, SAYS HE IS 'LOOKING FORWARD' TO DEBATE ON OCT. 15

Conley added that the president has “now been fever-free for more than 4 days, symptom-free for over 24 hours, and has not needed nor received any supplemental oxygen since initial hospitalization.”

The update comes after the president was discharged from Walter Reed National Military Medical Center, and returned to the White House on Monday evening, where he is continuing to be treated for COVID-19.

The president faced health scares throughout his battle with COVID-19, including two instances in which his blood oxygen level dropped suddenly. Doctors treated the president with a dose of the steroid dexamethasone in response.

Conley said that Trump had a “high fever” and a blood oxygen level below 94% on Friday and during “another episode” on Saturday.

But by Saturday, Conley said the president’s cardiac, kidney and liver functions were normal, and that the president was not on oxygen and was not having any difficulty breathing or walking.

Conley said over the weekend that the president had received an antibody cocktail, as well as zinc, Vitamin D, famotidine, melatonin and a daily aspirin, along with his five-day course of Remdesivir.

The president, according to his medical team, was set to receive his final dose of Remdesivir at the White House on Tuesday.

“My family is grateful for all of the prayers & support!” she tweeted Monday. “I am feeling good & will continue to rest at home.

Also on Monday, White House press secretary McEnany announced that she had tested positive for COVID-19.

Former counselor to the president Kellyanne Conway has also tested positive and former New Jersey Gov. Chris Christie, who participated in debate prep with the president recently, did too and was admitted to the hospital over the weekend.