Former President Donald Trump praised a U.S. service member who was photographed pulling an Afghan baby across the Kabul airport wall during the Afghanistan withdrawal and brought him onstage at a rally Saturday.

“We’re also honored to be joined by one of the Marines who bravely served in Kabul during the withdrawal and helped evacuate children over the airport and over the airport wall,” Trump told a crowd of thousands gathered in Perry, Georgia. “You saw him, he did a great job, Lance Corporal Hunter Ian Clark. Lance Corporal get up here!”

Lance Corporal Clark walked up to the stage accompanied by cheers, and Trump referred to him as a “handsome guy” during his approach.

“Hey, my name is Lance Corporal Hunter Clark, and I’m here from Warner Robbins, Georgia,” Clark told the crowd. “I am the guy that pulled the baby over the wall, and it’s definitely probably one of the greatest things I’ve done in my entire life.” 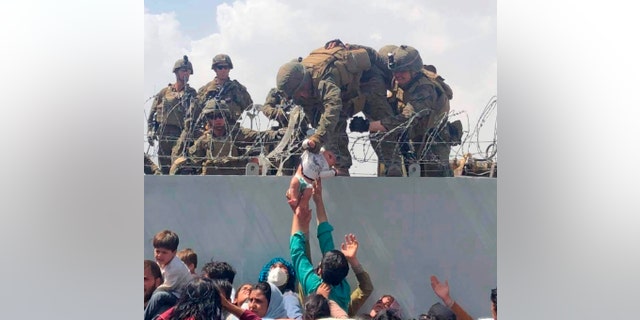 This image from video provided by Omar Haidari and taken Thursday, Aug. 19, 2021, shows a baby being lifted across a wall at Kabul Airport in Afghanistan by US soldiers. The image showed the infant being pushed up to the soldiers by people in the crowd gathered outside the airport, amid the chaos of those fleeing the Taliban takeover of the country. (Omar Haidari via AP)

Clark appeared to be choked up, adding, “I just want to thank all the support from all y’all. It really means a lot and I’m glad to be home now.”

Clark then shook the former president’s hand and walked off stage to chants of “USA! USA! USA!”

During his speech, Trump repeatedly slammed President Biden’s handling of the Afghanistan withdrawal, calling it the “most appalling display of incompetence.”

In the front row, Trump left 13 empty seats with roses placed atop them to pay tribute to the 13 U.S. service members who lost their lives during an ISIS-K suicide attack as the military was attempting to evacuate.

“In their memory tonight we have 13 empty seats of honor right here in the front row,” Trump told the cheering crowd. “Our hearts go out to the families of every service member that we have lost, and I’ve spoken to a lot of them. These are great, great people.”