The last six months of President Donald Trump’s political life have consisted mostly of attempts to make something ― protests over a racist criminal justice system in American cities, a Supreme Court nomination, false suggestions that Democratic presidential nominee Joe Biden will raise taxes on middle-class families ― other than the coronavirus pandemic matter. Those efforts have failed, and they have cost him nearly every conceivable political advantage.

Now, the very event Republicans hoped would finally change the subject ― the nomination of conservative Amy Coney Barrett to the Supreme Court ― appears to have resulted in the coronavirus spreading rapidly through the upper ranks of the Republican Party. The White House ignored public health guidelines at an event celebrating the nomination, placing attendees close together. Photos show a selection of the nation’s most prominent Republicans chatting freely while unmasked and indoors.

Trump has consistently tried to ignore his governing responsibilities during the pandemic, suggesting states with lockdowns should be “liberated,” mocking the wearing of masks, hawking supposed miracle cures, undercutting his own medical advisers, failing to create a national testing strategy, outsourcing major decisions to states and playing only a minor role in negotiations with Congress over relief legislation.

At the same time, his campaign has ignored the pandemic politically. Throughout July and August, Trump’s campaign did not air a single television ad mentioning the virus. In September, they aired just a handful. Mostly, these spots discuss how strong the economy was before the pandemic hit in March. Another ad promises the “finish line is approaching” in the “race for a vaccine.” (Most medical experts disagree.) The ads amounted to just 14% of the Trump campaign’s broadcast television spending last month.

Trump’s decision to ignore the politics, governing and public health consequences of the pandemic harmed him politically well before his positive test result. But the events of the past week ― the collapse of a new round of economic talks, a debate in which he alienated voters with unscientific bluster, a spike in cases nationwide, and finally his own diagnosis ― crystalized how inextricable Trump’s mishandling of the virus is with the deep political hole he finds himself in.

And that hole, to be clear, is deep. Biden has a clear and consistent lead in public surveys of crucial battleground states, with majorities saying they trust him more than Trump to deal with the pandemic. And time to persuade voters has nearly run out. Ballots are already in the hands of some voters in crucial states like North Carolina, Minnesota and Florida. The president will not be able to campaign in person for at least a week, and potentially longer.

“Trump getting the virus is the latest data point in how profoundly serious this threat is, and how profoundly his response has failed on it,” said Jesse Ferguson, a Democratic strategist. “The White House’s personal handling of the response now matches their public policy handling of the response: dismissing experts and downplaying the threat even if it means more people get infected.” 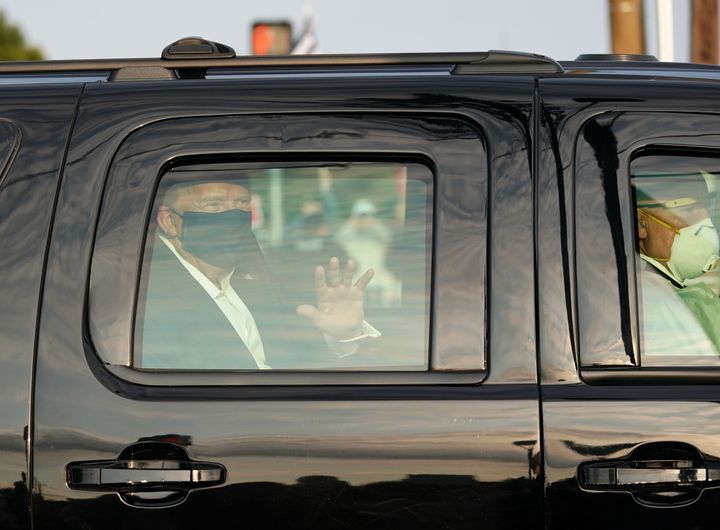 In many polls, voters still say they see Trump as a “stronger leader” than Biden. But now, some Republicans privately fear the imagery of Trump at Walter Reed National Military Medical Center, with his aides and doctors providing the public with contradictory and confusing updates about his status, risks blunting that edge.

In Tweets and video over the weekend, Trump tried to change the story again. On Saturday night, there was a video where Trump insisted he felt “much better.”  On Sunday, there was another video, with Trump saying he “learned a lot about COVID.”

“I learned it by really going to school,” Trump said. “This is the real school. This isn’t the ‘let’s read the book’ school, and I get it and I understand it, and it’s a very interesting thing and I’m going to be letting you know about it.”

But if Trump had really learned something, his campaign was not showing it. On Saturday, the campaign hosted an event in Iowa where unmasked attendees mingled with the state’s governor. On Sunday morning, one of his top campaign advisers claimed Biden has “used the mask as a prop.”

“They want to get life back to normal,” said Jason Miller, the campaign adviser, on ABC’s “This Week.” “You can’t just stay hidden in your basement the entire time.”

Miller’s comments show the Trump campaign hasn’t learned its lesson. Voters, over and over in public polling, have made it clear they care more about public health than reopening the economy.

Trump also continued to show his penchant for wishcasting and magical thinking. In his Saturday night video, he claimed new therapeutics he is taking to treat the virus were “miracles, if you want to know the truth.”

“We have things happening that look like they’re miracles, coming down from God,” he continued.

Trump also sent out a Twitter message declaring: “OUR GREAT USA WANTS & NEEDS STIMULUS. WORK TOGETHER AND GET IT DONE. Thank you!” But progress on a stimulus deal was stalled yet again last week, with Trump having largely outsourced the negotiations to Treasury Secretary Steve Mnuchin, and many Senate Republicans ― who may be susceptible to pressure from Trump ― are openly uninterested in further negotiations.

Instead of talking about the virus, the Trump campaign has whiplashed from message to message. In July, 81% of the broadcast advertising dollars focused on promoting the president’s so-called law and order message, often with ads falsely suggesting Biden supports abolishing the police, according to data from Kantar/CMAG.

That dropped drastically in August, when the campaign spent less than 2% of its budget on crime messaging and 74% on ads about taxes. It was only in September that it returned to coronavirus messaging, and even then spent just 14% of the budget on ads about the virus. Crime spots took up 41% of the campaign’s $52-million message, and ads on taxes took up 36%.

The messaging from Trump personally has been even more scattered, often driven by personal grievances and whatever he’s seen on Fox News.

“One message is always more effective than a dozen messages, and that was part of the problem Tuesday night,” said Alex Conant, a GOP strategist and partner at Firehouse Strategies, referring to Trump’s debate strategy. “Trump attacked Biden for being dumb, for being too liberal, for being in Washington too long and for having a kid who got in trouble. He hasn’t been able to find a message for people to latch on to.”

In contrast, Biden’s message has been relentlessly focused on the virus, which he returned to again and again during the debate. The Biden campaign spent 96% of their broadcast television dollars on coronavirus ads in July, and 80% in August. In September, when broadcast television spending spiked dramatically to $110 million, 56% of Biden’s spending went to coronavirus ads.

And the challenger is reaping the political rewards for his focus. While Biden’s polling lead over Trump is longstanding, the campaign’s single-minded focus on combatting the disease has improved his personal image. A new NBC News/Wall Street Journal poll released Sunday showed 43% of Americans had a positive opinion of Biden, while 41% had an unfavorable opinion ― an 8-point positive swing since August.

The same poll showed just 39% of Americans had a favorable opinion of the president, while 55% had a negative opinion, a 4-point downturn from Trump’s standing in August.

Everyone deserves accurate information about COVID-19. Support journalism without a paywall — and keep it free for everyone — by becoming a HuffPost member today.