President Donald Trump told journalist Bob Woodward in July that he deserved an A for his handling of the coronavirus pandemic that had already killed over 70,000 people by that time.

The Washington Post reporter interviewed Trump 18 times for roughly nine hours total for his new book, “Rage.” Continuing a discussion about his leadership, the president told Woodward in July how he thought he’d handled COVID-19.

Trump insisted that he’d begun “executing” his plans, saying “I will have immigration done. I will have health care done. I think we’re going to have vaccines soon. I think we already have them.”

“But they’re in tests,” he added. “And you’ll see them being announced over the next month. Now would you view that as a game-changer?”

Woodward responded by asking Trump what grade he would give himself for his handling of the pandemic.

“I give ourselves an A,” said Trump. “But the grade is incomplete, and I’ll tell you why. If we come up with the vaccines and therapeutics, then I give myself an A-plus.” 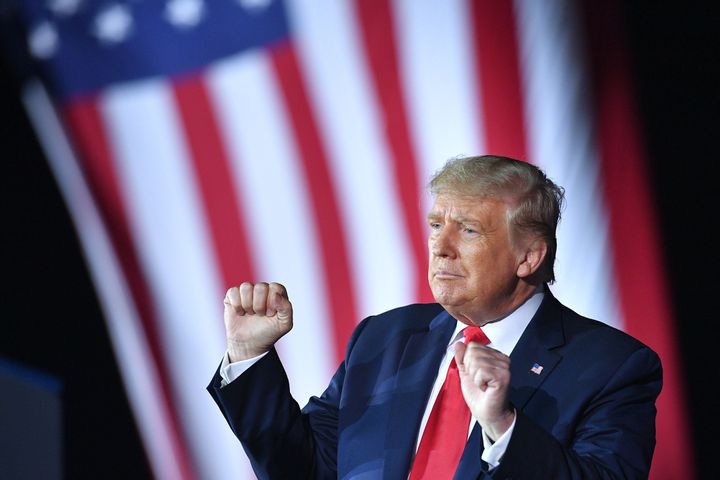 Taking it further, Woodward asked Trump what he’s “learned” about himself.

“I can handle more than other people can handle,” Trump replied. He added that “very strong people, people that are successful, even” had told him, “I swear to you, I don’t know how it’s possible for you to handle what you handle. How you’ve done this, with the kind of opposition, the kind of shenanigans, the kind of illegal witch hunts.”

The president later added that “the virus has nothing to do with me” and said, “It’s not my fault. It’s ― China let the damn virus out.”

In an earlier interview with Woodward, the president admitted that he knowingly downplayed the severity of the disease.

“I wanted to always play it down,” Trump told Woodward on March 19. “I still like playing it down, because I don’t want to create a panic.”