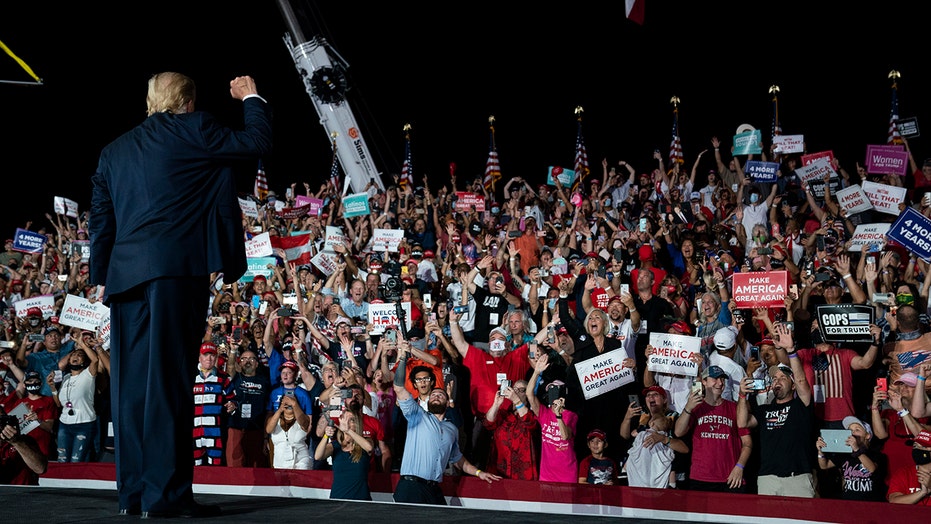 Trump supporters are showing up to events and will continue to show where it matters including on Election Day, says Isabel Brown, Turning Point USA spokesperson.

With the November election just three weeks away and millions of Americans already casting their ballots, President Trump and Democratic rival Joe Biden are making last-ditch appeals to voters in key battleground states.

The battle between the two candidates was thrown into chaos two weeks ago when Trump announced that he had tested positive for COVID-19 and was subsequently hospitalized at Walter Reed National Military Medical Center for three nights.

But on Saturday, Trump's physician, Dr. Sean Conley, said the president has been cleared to return to an active schedule and has met criteria from the Centers for Disease Control and Prevention to end isolation.

TRUMP AND BIDEN SUPPORTERS OUT IN FORCE ACROSS FLORIDA

Trump held a rally in Sanford, Fla. on Monday night, his first since he contracted the coronavirus.

“I feel so powerful,” the president said during his 65-minute speech.

Here's what you need to know about the presidential campaigns and how they'll be spending Tuesday, Oct. 13, 2020, just 22 days away from the election.

Trump plans to stump in Pennsylvania on Tuesday as he ramps up his campaign schedule. The president is slated to deliver remarks at a Make America Great Again rally in Johnstown at 7 p.m. ET.

Pennsylvania is a vital swing state; although Trump narrowly won it in 2016 against Hillary Clinton, a RealClearPolitics average of polls shows Biden leading by 7 percentage points.

Biden is traveling to Florida — a delegate-rich state — with stops planned in Broward County, including Pembroke Pines and Miramar.

In Pembroke, the former vice president is planning to speak about his "vision for old Americans," while in Miramar, he'll emphasize the importance of getting out to vote.

The trip marks Biden's third visit to Florida during this campaign cycle.

The Biden campaign announced that Jill Biden will make three stops in Texas, with planned events in El Paso, Dallas and Houston.

The Trump campaign has not released Pence's schedule.

“Due to Judiciary Committee Republicans’ refusal to take common sense steps to protect members, aides, Capitol complex workers, and members of the media, Senator Harris plans to participate in this week’s hearings remotely from her Senate office in the Hart building,” a spokesperson for Harris said in a statement.